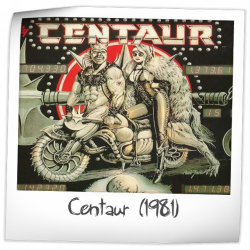 There are 134 ratings (that include a comment) on this game.
Currently showing results page 1 of 6.

The beast from Centaur and a group. The group formed on some pinball like Highspeed and Spy Hunter. The big guns came out and made another 5 ball gimmick. You try to go up the lanes and the game has a flip back which gets harder in time. The newbies may miss how it's related to Fathom with all the evo events these days. Some flippers get sick quick on this one but it's okay in the end making it related to Steam and the Pinball Arcade. Part two is a rare find also.
4.203/10
3 months ago
DAV

Rented this game for two months and hated every minute of it. Can not understand why this game is rated so high (and above so many games far better to it).
10.000/10
4 months ago
ZAC

What an awesome game!

Centaur is a game that anyone can play but rewards the skilled player. I love the early Bally solid state games and think Centaur is one of if not the best during this timeframe. Medusa might be a touch prettier but art is just the garnish on a fine game and Centaur is clearly the better of the two. Flash Gordon is right there in the gameplay running but suffers from underutilization of speech and perhaps single ball.

The multi ball implementation on Centaur is perfect from the progressive earning of balls to the various release triggers.

Centaur is a true classic and the theme works incredibly well on many levels. The speech and music are creepy and add to the overall darkness of the concept overall. The artwork is some of my favorite EVER on a pin, absolutely stunning. The gameplay is tough but rewarding when you can hit those special shots particularly in the upper left and upper right of the playfield. The cherry on top is when the ball drains you get a satisfying bonus countdown that sounds like you are racking up those points (even if you might not be!). It makes you feel good and ready to take on the next ball or game! Love this one!

noiseprisoner has this game on the wishlist.

One of the best early 80's pins. Shot variation is much wider than most of its contemporaries, and vocal commands/taunts also feel ahead of its time. I always considered Pinbot the first prominent game with an interactive antagonist, but this is way earlier.

Pros: Phenomenal synth score! Worthy of Near Dark or Suspiria in its horror atmosphere. Game play and playfield are head and shoulders above vast majority of era pins (up there with 8-Ball Deluxe).

Cons: Some cheap drains due to upper playfield having weird slot placement. Not sure whether to consider ridiculously goofy backglass as positive or negative.
7.100/10
10 months ago
JMO

Incredible art, rule set that challenges the best of players. Very unique game, one of the best solid states.

onetaste has this game on the wishlist.

This era of games isn’t really my thing but I do recognise Centaur and Fathom as being among the best. Theme and art do nothing for me but the system of achieving multiball and then trying to stay in it keeps me coming back for more and the layout is more inventive that many from this era.
9.491/10
1 year ago
JEM

Spectacular Art. Great sound effects call outs. I think this game the best of its generation (yes - better than fathom :) !!!)

Simple gameplay but you always come back for more.

One of Bally's best playing ,keep you coming back for more.

Wmasspin has owned this game in the past.

I like the old school multiball and the challenge of hitting the captive ball. I keep coming back trying to figure out the right timing to get the captive ball all the way.

After a long session on a perfect example this weekend I realized I'd forgotten how great this machine is. It's critical that all of the features work right and machine is set up properly, and I've noticed on routed machines in the past certain parts were screwy, impacting overall play. Only thing I dislike on the playfield is the gap in the Orb targets can set up an SDTM drain a little easily.

For the time period, this is one of best Bally solid states out there, with plenty of shots, decent speech/sounds for the time, and playfield / backglass art of the Paragon / Lost World / Viking quality.

SteveRivet has this game on the wishlist.

My favorite Bally Class of ‘81 pin. Amazing art, great layout, and definitely gives you the “1 more game” feel. Looking forward to a Haggis remake (hopefully). Might be my 2nd NIB pin ever. Then I can listen to both Centaur and Deadpool heckle me with each missed shot. “Bad move human.”

While I completely enjoyed playing this game - with drop targets, plenty of specific items to aim for, straight-forward rules, and amazing artwork, it does seem to drain quarters and balls at an alarming pace. While I keep coming back to play, its also frustrating to not be able to establish any lengthy gameplay. Many different shots to try, and more strategy than I could try on my first exposure - I'm more into playfield design, game play, lastability and fun, but the artwork and sounds definitely add to the experience. Excellent game other than the large number of quick “no fault” drains

This and Fathom are my two favorite games from this era. I might even prefer the gameplay of Centaur a little more than fathom. Multiball is incredible for the time and the callouts are great.
8.276/10
1 year ago
LEX

After owning 3 centaurs i feel like an expert.... Haha, seriously this is one of the only tables that lets you forget everything else around you. The sound is inviting you to become one with the machine and it plays you -> bad move human :)

It's hard to get those 5 balls out and even with 2 balls out you have to work.

If it plays slow or cluncky then your machine is not dialed in the way it should be.....It begins slow and ends in mayhem and it will hypnotize you like no other machine can.

Compared to my addams family or shadow it holds its ground and thats impressive!

Y'all telling me this game rates about the same as Getaway on the Top 100? . It's not even close.

Maybe for it's time it was novel and cool. Nostalgia and all. The art is the coolest, weirdest, worst, best, ugliest, most awesome mix of whatever it is! Hahaha.

The game has some cool shots and ruleset is decent. If not too easy. Fun time.

But cmon..... Play it for the novelty and move on. Unless you grew up playing it and still have a hard-on for it. It plays slow. Sloppy. Sounds are OLD. The game is OLD. It plays OLD.

Dont rank it up with the high class just because it USED to be the shit. It's not.

Jump on it if you have a shot. Take a spin and say you've played it. That's all you'll need.

This is my second time around on owning this game, and should have held on to it first time around in the 90s. I wasn't quite as exposed at the time to all of the games in the world to appreciate its uniqueness.

The art and sound package is a masterpiece of creative and aesthetic commitment to the theme, which includes some intentional ugliness as it should. Let's all appreciate how hard it is to get something like this to market anymore (Metallica and Walking Dead being exceptions to the rule). And not only is the multiball kickout a unique mechanism of interest to techies, it also makes for a wonderfully surprising attract mode when it shoots out all the balls on its own. And much love for the ball-holding magnet -- an early use of that feature (following on from Gorgar if any others).

While everything this game offers in terms of rules and action are rich and exciting for the period, one does eventually master the shots and you, as a human, can "destroy Centaur"! So perhaps the only con here is not having an extra display digit -- rolling it over, like with all SS machines of the era, requires you paying attention to mark it. Doing so multiple times becomes annoying to track. I started another thread soliciting info on how to fix that, with some great responses.

Lastly, I must recommend getting an overlay for the playfield. My machine has wear, and slight cupping in spots while waiting for me to spare a full work week to do a PF swap. In the meantime, I grabbed an overlay for it and it really came to life as though brand new, zippy fast and smooth!
Next123456
There are 134 ratings (that include a comment) on this game. Currently showing results page 1 of 6.