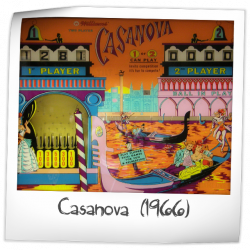 I want to love this game, but the bagatelle is kind of ridiculous. The table rules are actually really cool, you "change" between red, green, and yellow targets or all 3 lit at once. Lit targets and rollovers are worth big points and as the ball bounces around the lit targets will change.

Unfortunately the game is a pretty tough 2" flipper game and at the end of every ball you get a pointless bagatelle feature. Don't get me wrong, bagatelle is cool but it adds a random 500-2500 points to every game (in a game where 2000-4000 scores are pretty common)! If you ever wanted to complain that EM pinballs are a luckbox, point to Casanova. For just drinking and playing a game that's half luck though, it's pretty fun cheering for your bagatelle ball.
7.055/10
5 years ago
WYO

It has a little drop ball game in the backglass which is cool. What else is coll? Not much. Poor layout, the top part of the pf is inaccessible and wasted unless you get lucky with a bumper. The 2 stand-up targets largely block access to the middle pf. Not much to shot at, boring and uninspiring.
7.386/10
7 years ago
ZUL

Casanova is a very fast game when set up properly.

The Pros:
Vivid and colorful art package makes this game a joy to look at. Sunsets in Venice never looked so good. Do not be fooled though. This game is fast, and requires your attention. Great action at the top in the pops and lots to shoot for in the lower PF. Bagatelles in the BG are always cool.

The Cons:
This 5 ball game can easily be over in less than a minute with eeety beeety fleepers and no chance to get the ball back in play at the bottom of the PF if not played well. The water in Venice is dirty, but is it orange?

The Takeaway:
When properly maintained, a skills game that will test your pinball mastery. Not for the easily dismayed.
6.361/10
8 years ago
RAI

Yay for EMs being added to Pinside! I picked this baby up on a Craigslist curb alert. Other than the cabinet being painted over, the game was in great shape. The backglass on this 45 year old game was 99.9% perfect -- amazing.

This game has the distinction of being one of the handful of rare bagatelle-in-the-backglass EMs. After every ball the small pinball is shot and plinkos down into one of the point values. If you light the A or B spot target on the playfield during your ball and then hit the middle lane (500 points) you'll be awarded an extra ball. There's also a special target on this game that can be changed to award everything from free game to an extra ball.

All around the playfield are "Change" switches. These light different targets and rollovers for differing point values. There's certainly a distinct strategy when playing this as you can light more beneficial targets and then rack up the points. The flippers on this are short metal flippers that make the game interesting and are really beautiful. Finally, the lack of inlanes make it a nudging and bumping dream as you try to keep the ball in play when bounding off the slingshots.

The theme is probably the weakest component of this game. It's a Venice-like setting complete with gondolas and Italian renaissance dress. Fitting for the name, but quite boring in the theme. Still, fun to play and it has some great extras that make it an above-par EM.

Raikus has owned this game in the past.