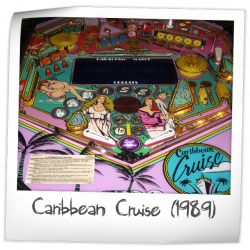 This game has received 15 approved Pinsider ratings. 15 more approved ratings are needed to get a rating and for it to be eligible for the Pinside Pinball Top 100 ranking.

This is a fantastic little game with a lot of fun shots and decent flow packed into a small package. Cool shots can be made on all four flippers, many across the playfield (e.g. far L flipper to the yellow "skeet" target bank; side spinner shots, R flipper to green standups); very satisfying loop / spinner shots on both sides; pops and slings keep side-to-side action intense but fair IMHO, this is probably because there are limited places to drain; several key shots (skeet targets, jackpot target, drops, and the mystery loop) have a risk/reward feel to them that is, again, pretty fair.

Skeet mode is awesome, multiball is enjoyable, and it's fun to build the bonuses via the various targets. Gameplay overall is a nice balance between controllable and chaotic so games don't get boring if you're playing for fun. In some ways I'd compare it to late EM / early SS games in this sense -- games can be over quickly if you're not careful. You also have to thing about nudging differently as the physics of nudging is very diff. on a cocktail cab.

What's not to like about the playfield art and overall pink and aqua color scheme?

I like the theme as a departure from the super macho pins of the 80/90s and adherence to theme is solid ... callouts, art, animations, music, modes/goals, attract all work with the idea of a wacky caribbean cruise. My kids dig the colors, music, and size of the machine.

The mystery shot tends to puts a pause in the gameplay that might be annoying to some but this is a machine built for bars ... take the 5 seconds to sip on your pina colada.

Besides a grail machine like Joust, I'd say this is the cocktail machine to seek out (at least compared to others I've been lucky enough to play out in the wild).

Most of the parts are relatively findable as they are standard system 3s. It is my understanding that the alphanumeric display board for this one is unique to this game (it's a diff part number than other AN sys 3s anyway), but the other boards are more common.

What I don't like:
Would prefer to build toward multiball in some way, rather than a mystery award. Similarly, the jackpot is a bit too easy to get.
As mentioned by other reviewers, the GI is a little lacking and this is a good candidate for PinStadiums, led strips, etc. I've added 2 pin stadiums and may add a third as well.
The star post at the top of the right hand loop will frequently cause a stuck ball if you don't remove the rubber ring on it.
Replacement glass is unobtainium ... I'm looking for a local place that can cut me a replacement because what I have has been scratched up and generally abused. I think this is a common problem for cocktail pins that were out in the world and, given the rarity of the machine, that wasn't a dealbreaker for me.

I've normed the scores for cabinet and backglass art, as these categories are null for a cocktail pin.
8.071/10
3 years ago
???

Backglass rating is mandatory, but cocktail pins have no backglass.
Aesthetics:
Great music and speech.
Great Alphanumeric animations. This is a pin with a vibe to it, take my word for it.
Playfield art is a bit weak.

Rules:
The mystery awards seemed to be pretty swingy. I wonder if this game has a tournament mode.

Layout:
I'm not sure if I don't like the shots yet. I couldn't hit the center lane and the side loop consistently. But that might change with more games. They do look like they'll be fun to shoot. The spinner shot was pretty cool, too.
7.708/10
4 years ago
WAR

A very rare game & the pick of the small number of cocktail machines. Wonderful artwork on the pf & a well thought out pf layout in limited space. Always a talking point with guests this one is a keeper.
8.430/10
4 years ago
ZUL

Caribbean Crusie is a game that will not be denied for its qualities.

The Pros:
An incredible layout with 3 layouts within a single COCKTAIL PINBALL layout. Seriously. 4 flippers on a cocktail? People can talk shit about him for the rest of his life, but his single level pinball layouts are NOT TO BE DENIED! The shots are incredible. The lower left pinball makes shots on the left of the PF as well as across the PF to the S-K-E-E-T targets (yeah I said it. SKEET-SKEET-SKEET!) and the million point cycling shot after completing the bank means that the game has multiple strategies. The cruise "tooooooooooot" and other effects are cheesy and spot on.

Cons:
Multiball is the big scoring opportunity. I believe the multiball score is built until collected, but it is utterly unbalancing. The start multiball award is random from the saucer heading into the upper right flipper and is treated as a mystery award. A big whammy on the multiball makes the rest of the game a waste, a chore or at the best... an opportunity to chop a LOT of wood. System 80/ 80b makes you ask Is this game a "fixer"? Break out the multimeter, logic probe and the oscilliscope if you can... do it and make this game WORK!

The Takeaway:
A great game for the party! Find one if you can. System 80A means that it is not as difficult to deal with as sys 80b. The wood paneling is straight out of 1973 and this game was released in 1989. But DAMN!!!! This table has GAME in it. Not for the timid or the closed minded. Find one and play it if you can today. Because this is the best cocktail pinball I have ever played. For reals.

Just got this and have put several games on it. So far it seems to be a lot of fun, the flipper arrangement along with the unusual shot angles make for a fairly good challenge. Have not had a really high scoring game yet. As others said, multi ball happens often but it is difficult to hit the jackpot shot before one of the balls drain. Cool Caribbean music and a bunch of decadent 1980s cruisin' guys and gals depicted on the playfield art really set the tone. A lot of game crammed into a small space, but it works. I give it high marks across the board with the exception of cabinet and backglass art because there is none. A cool and different pinball experience.
8.194/10
5 years ago
FBA

Game is hard to find but when you do it will never leave your collection..It has multiball..Cool artwork and fun gameplay..I think the best coctail pin ever made..Great lighting as well

Deerlakes6 edited previous rating on June 05, 2017.
Deerlakes6 has owned this game in the past.

More I play it the more I like it.it has to be the easiest multi ball to get ever and the hardest to keep going.it's not the best machine in the world and I just bought it because I know they're rare and I had a spot a full size machine wouldn't fit but now Im glad I bought it and find it fun and challenging.
7.768/10
6 years ago
CAD

This is a fun cocktail table that offers a nice change of pace from full sized machines. Even though it has a much shorter playfield, the 4 flipper set up offers lots of great shots. The 2 ball multi-ball is fun and hitting the jackpot target is a challenge with both balls in play. The music and call outs are good and fit the theme perfectly. The light show that this machine puts on is actually pretty impressive. I also really like the blue alphanumeric screen in the middle of the playfield. It's so easy to see during a game and I wish more tables offered this. This game even features some cool animations like sailing ships and anchors flying across the screen. The artwork is very 80's, but it's part of the machine's charm.

On the negative side, even though multi-ball is a lot of fun, it's shame that it's just a random reward for hitting one of the kick out holes. It would be nice to have to complete an objective or two to earn multi-ball. Overall, this is a unique machine that plays different than any other pinball I've played and it's a great compliment to a collection. Out of the handful of cocktail pinballs that I've experienced, this is best playing one by a large margin. With less than 400 made, this is a rare machine and I don't ever see it leaving my collection.

This cocktail pin was actually pretty fun with the 4 flippers and multiball. The skeet shoot tagets are fun too. I kept coming back for more.

Donnyman has owned this game in the past.

1
There are 10 ratings (that include a comment) on this game. Currently showing results page 1 of 1.