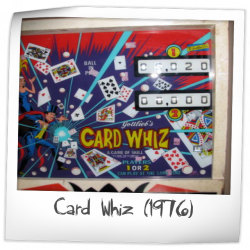 There are 22 ratings (that include a comment) on this game.
Currently showing results page 1 of 1.

Card Whiz (and four-player Royal Flush) is/are one of the last EMs before solid state and Gottlieb made a lot of them. This is a great pin for both a small collection and a large collection. It has a classic playing card theme which is ideal for a drop target game. A shooter game in which you increase your bonus if you get a good “hand” by selective shooting the drops. A very refined design with simple rules and great geometry, the biggest let down is the playfield art which is nothing to write home about. The backglass looks nice, though the magician theme isn’t really carried throughout the pin except on one plastic. The rest of the pin is purely card based. A missed opportunity with theme for sure. Overall, it’s a fun, very well designed Ed Krynski pin. If you only have room for one EM in your collection, this one would be a good choice.
9.026/10
9 months ago
KOJ

Very interesting layout makes this one stand out. Single pop-bumper is ahead of its time. Love the different shots, and scoring bonus of the jokers. Great theme tie-in, with the bonus being made up by the drop sequences hit.

I really enjoyed playing this game. Unlike other EM's you have to try to hit the jokers before hitting the dropouts which will greatly increase your points for the dropouts. This kept you from just slapping the ball around and praying for the best. You really have to control your flippers in this game which I thoroughly enjoyed!

RetroToys has owned this game in the past.

Plays fast and is very fun especially if you like poker, trying to make the poker hands and knock down all the jokers is really hard to do but ohh so satisfying. Chimes are great and the single pop bumper works out well.

This game has a coolness factor but I believe it to get boring after a while and repititive..Not exciting to look at either..If you can get it cheap then get it..But I can't understand all the hype..Just an average playing em with some targets...In my opinion
9.658/10
3 years ago
FC

Card Whiz is a fun game. If I had all of the quarters back that I spent on this game at Captain Jacks pizza and bowling in Minnesota, I could make a house payment. Drop targets are well placed and the theme is classic.

Amesra has this game on the wishlist.

I just got this machine due to my memory of playing this as a child. This game is addicting and the challenge of hitting the jokers first to maximize points makes it easy to want to keep playing. What is also frustrating about the game is also what makes you want to keep playing. Some balls drain in seconds, some balls can play forever. The challenge is to get those jokers for full point value. Everything in the playfield increases point value as you hit those jokers. What is also equally frustrating and challenging was hitting a drop target does not guarantee bonus. Great Game!! get it if you get a chance.
PS. Still can't understand why Gottlieb didn't put a 100,00 point lamp....doesn't make sense.

Brak0777 has owned this game in the past.

dasvis has this game on the wishlist.

Drop target city. More enjoyable if you know how 5 card stud is played.

MurphyPeoples has owned this game in the past.

Here is the genius of Ed Krynski.

Walking up to Card Whiz for the first time gives the impression that you are about to play an unfinished, rushed machine. For starters, the table seems almost embarrassingly sparse: 3 scattered standups, 1 (one!) pop bumper, a couple rollover lanes, and some drop targets. Most of it clustered around the top left 20% of the table. It doesn't appear to be a good use of space, and just doesn't seem like there is much to do - and there isn't (spoiler alert, that's a good thing).

The playfield art, while serviceable, is really nothing special other than some swaths of colored shapes that really aren't very cohesive at all. Not disappointing or ugly, but certainly not captivating - especially considering what we know Gordon Morison was capable of. The backglass pops, but again, not really cohesive. Is this a magic trick? A poker theme? Whatever, I'll give it a game or two.

After the first couple games you'll realize you've been tricked; this is about as complete of a design that has ever been realized. The greatness of it can be boiled down to this:

That one thing you want to shoot at the most? Yeah, not only should it be the LAST thing you shoot, it's also the most dangerous.

That's it. The essence of pinball. Every truly great machine has some variant of the above statement, but Card Whiz distills it to the cellular level, drops the mic, and walks off stage. I was literarily shocked how perfect the placement of the drop target bank was and how well the rules were implemented. There's not much to do, but what IS there is addictive, challenging, and satisfying.

Like the Hollywood director John Ford, or Nintendo's Shigeru Miyamoto, Ed Krynski was just a company man, working a job day to day while effortlessly pumping out product so far above his peers it changed the language of the medium. This is one of his finest tables, but unfortunately it is not one of Gordon Morison's, so my rating reflects the complete package.

If Leonardo da Vinci was correct in saying that simplicity is the ultimate form of sophistication, then Krynski was easily the most dapper motherfu--er in the room.

TheShameGovernor has owned this game in the past.

This is one of the best EM's out there by my standard. This game is really about flipper control and shots. It has a fun rule set and definitely has lastability. It has a great theme and is really a fun EM. I think it brings everything to the table; it has a great theme, great game play, cool ruleset, different style angled PF and finally the skill shots to get the jokers to increase the card values is fantastic.
9.549/10
6 years ago
BOB

This game is a keeper. It is challenging to win on points as well as special. The artwork is great on all three fronts, playfield, backglass and cabinet, (rarely you see that). Machine must be in top condition to feel the full effect of this game.

This game will challenge you to trap the ball and bat the ball hard to get it back to the roll overs. The return lane to the shooter is a nice touch. Did I mention DROP TARGETS?? :) I LOVE the backglass and the theme. One day soon I will own this machine or Royal Flush.

Rat_Tomago has owned this game in the past.

Played this EM for the first time, and thought it was a great pin from that era of EM's. The drop targets were nicely placed and I ended up getting the top score on the machine!!!!
8.026/10
7 years ago
B13

Just a fun game, no deep Rule set here, just a fun card themed machine that at times can really pizz you off, it will keep you coming back game after game, I have one, they are easy to find, if you like 70's gotts, this is a must have.
9.658/10
7 years ago
MTA

If you like games like golf, or candlepin bowling, you'll like Card Whiz. Card Whiz is tough from beginning to end. You'll want to make the drop targets to get the highest bonus scores, and hitting them causes your ball to start bouncing side-to-side. This game is a ton of fun *IF* your ego doesn't bruise easily, and your accustomed to games where you strive for "perfection", but rarely achieve it. You'll want to keep playing it until you beat it... and then you'll play it again!

Card Whiz is a deceptively simple game. An asymmetrical PF from Krynski that keeps on giving and giving... You think you have it down and... WHAM! your ball is out!

The Pros:
Great shots. Tough shots as well as seemingly easy ones that send your ball towards the outlane in no time flat. Classic Gottlieb design of simple, but not easy. You want the game to sing... you better earn it. Keeping control of the ball near the flippers is paramount. The space between them is a gaping maw of pinball death. The game requires you to build poker hands to make the most of your bonus. Missing 1 card can mean that you only get one or two of the 5 inserts lit on the bonus ladder. curse you red jack!

The Cons:
The Saucer on the right is a random shot. shooting for it never drops it in. I sold mine.

The Takeaway:
Flipper skills are a must and if the ball is heading on the way to the outlanes, it's probably gone. Control is key and that bank of targets at the top is designed to reflect the ball at an angle and get it bouncing sideways. At 5 balls, the game times average about 3 minutes. Shorter than most 3 ball games on my modern tables. A perfect example of Krynski's masterful craft at the height of his pinball design powers!

Too easy of a game to play. I could get replays all day long and it got boring. Pretty game, though. It may not be bad for home use.
7.508/10
8 years ago
SCO

1
There are 22 ratings (that include a comment) on this game. Currently showing results page 1 of 1.