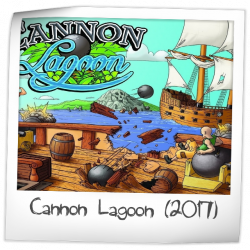 This game has received 5 approved Pinsider ratings. 20 more approved ratings are needed to get a rating and for it to be eligible for the Pinside Pinball Top 100 ranking.

This is more of a ticket redemption style game but it's a lot of fun. My kids love it. There a basically 5 shots that sit in front of an lcd screen showing ships going back and forth and the aim is to shoot those ships and sink them. It's timed for each level and you have a certain number of ships you have to get in that time limit. The ships increase in number and speed for each level. First 3 levels are pretty easy but then it starts to get harder - level 5 is pretty difficult but then you're rewarded with a bonus level which is very cool (I haven't beaten that one yet). All up pretty fun and something that non-pinheads like. Honestly my kids don't really care for my pins:( but the P3 has suddenly got them very excited. And that's a good thing for the future of pinball.

I got to play a prototype version of this game in both single user mode and multi-machine networked mode at a recent tournament where it was up at the venue. The basic game is like a carnival game, more so than a traditional pinball; you have to shoot at animated pirate ships in the backglass/animated display as they pass from left to right and change directions, shooting the pinballs exactly so. It's an interesting training exercise, as it were, but the play itself is like every video submarine game from the 70's and 80's, only you're flipping balls instead of firing on-screen torpedoes.

The networked game is basically a parallel-play version, where you get identical challenges but one of you does better than the other.

As with all the other P3s I've tried (I think I've tried them all, at least all I've heard of) there are some intriguing ideas for innovation here that come up significantly short when it comes to execution in terms of a Fun Quotient. So I give it a friendly pat on the head but it's way, way down on my must-own must-play list right now.
7.061/10
4 years ago
SAP

Not really a true pinball machine in the purist sense, but a cool idea. Feels like a game you'd play at Chuck E. Cheese's or something like that. Would definitely make money on location, but not something I'd ever want to own. I guess it's a cool swap-out for the system overall but I find it quite repetitive and boring.
1
There are 3 ratings (that include a comment) on this game. Currently showing results page 1 of 1.