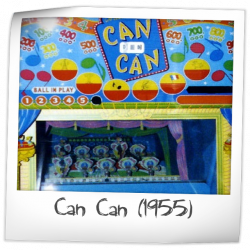 A rare and usual pinball game from the mid-1950's (not to be confused with the Bally bingo game of the same name). The 3-digit credit reel (up to 999 free games!) shows that this is really a gambling game. You can theoretically win 50 free games or more during one play. While the credit reels look like score reels, the actual score is displayed using backbox light scoring like other games of this era.

The playfield, which is smaller than normal, is incorporated into a gun game-style cabinet that has a mirror in the backbox that reflects down to the Can Can girl animation unit at the bottom of the cabinet. There are 3 pop bumpers and 6 non-pop bumpers. There are 4 top and 2 side rollover lanes. There is a large gobble hole in the center of the playfield.

When the game starts, a random award may light on the backbox that indicates a chance for a free game or extra score if a certain lane is hit on a certain ball. There is a slip-clutch mechanism like on a bingo game that selects the random award.

The main goal of the game is to hit the 6 numbered bumpers and 4 top rollover lanes so that all 10 Can Can dancers are flipped. You will them be able to shoot for the gobble hole that will be lit on the 5th ball. There is also a rollover button on the playfield that will increase the number of potential awarded games from 5 to 50!

3 Pinsiders have this game on their wishlist.