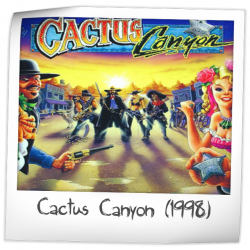 There are 193 ratings (that include a comment) on this game.
Currently showing results page 1 of 8.

Under-rated classic. Love the train ramp, and the “bad guys” that pop up. Great layout and fun theme. One of my favorites of the older generation.

I picked up CC over a month ago added continued and wow it funny, challenging and lots of fun. I am enjoying it immensely and highly recommend. I feel this pin would be rated higher in the ratings category.

Maybe its because I only get a chance to play this machine once a year but it is in my top 15. It's just a fun shooting machine that doesn't take itself too seriously. The code is weak and the machine is currently overpriced. Hopefully both of those will be corrected with a remake and I will add it to my collection.
7.800/10
1 year ago
JNS

I have only had the opportunity to play this game on 2 different occasions but both were very nice specimens & I really dig it because its so different some entertaining callouts & nice shots , very much looking forward to see what the remake that is rumored to be coming out will be like
9.460/10
1 year ago
???

This is a great game.Always fun to play and very pleasant to look at.Shot the bad guy is great,but how cool is "High Noon"Would have to agree it's not quite finished but still awesome.Thats on CC I've never played CCC
7.215/10
1 year ago
???

I am surprised this game is not ranked much higher. It is a classic right up there with the humor and game play of Monster Bash, Medieval Madness and Scared Stiff. It is in my collection and one I will never tire of or relinquish.
7.532/10
1 year ago
JSH

I've tried and tried to get into this one and it just doesn't grab me. Life is not fair because I know many people are going nuts wanting to play this, and there's one in an arcade not far from me. (I can't believe the owner lets it sit there like that, but on the other hand I thank him because people get to play it. With that said, I don't think I've ever seen a stranger on it.)

Ok this is a lame review but that's all I've got. I'll give it a few more quarters next time I'm there. The theme is cute, nothing wrong there.

*Wife approval* She may have played this once during one of our early trips to the arcade, but I haven't seen her on it since.
8.884/10
1 year ago
TKM

Very fun and unique game. These are tons of fun to play, but you better be prepared to shell out the bucks if you want one in your gameroom. You rarely see the for sale, either. Great shots, fantastic callouts, awesome gimmicks/toys.

Outstanding game! I bought an original CC, I havent installed continued yer! But I am sure my rating will be ome higher!!! This is my Holy Grill

Owned a CC for a while: super fun game to play occasionally, friends and family love it each time they put their hands on it.
unfortunately, code is incomplete and pretty shortly, you finish the game and its wizard mode.
...and the more often you play CC, the more often you will get to achieve "High Noon" and on and on.
it is an "easy" game to finish, but very fun to play and the toys are really cool (Gold Mine, train, Bart etc.).
I would say am not the biggest fan of the artwork/color scheme and so not sure it can stay super long in a small collection.
Anyway: a classic game, rare, and very, very fun to shoot.

ParisPinballAdct has owned this game in the past.

Ruleset a little bit flat but a good machine for beginners and makes a lot of fun to play.

It was a serious blow to be a pinhead in the late 90's, when after a spectacular run of games by Williams/Bally, and a few decent ones by their competitors, even Williams went boots up. Yes, technically they stayed around, and while Pinball 2000 didn't save anything, neither at the time did the now-respected Revenge from Mars seem like anything but a step backward, like the hybrid video game units of the early 80's. Then that too died a quick death and we had virtually nothing but s few Sterns every now and then. It sucked.

Why am I yammering on, codger-like, about the bad old days of the bust? Because Cactus Canyon became a grail machine. Low production, barely distributed, not quite finished, it promised to be another in the line from Addams Family to Tales of the Arabian Nights via Attack from Mars and everything else wonderful that flowered in the most fruitful half decade in pinball design. It had been announced, people knew it was out there, but damned if you could find one to play. It was like a ghost. The legend grew.

And fast forward a dozen plus years, I finally got to play one, at the same place most people can play a Cactus Canyon, at a show. And that's the only place I've ever played one. Never seen one in the wild.

And it was...dang, pardner, I have to say it was a bit of a disappointment. The retro theme didn't seem to have its own weird mind, like Medieval Madness, or synthetic retro flare, like Attack from Mars. The original theme wasn't quite so original -- western themes are as old as pinball, and it wasn't even copping off a popular theme. And what there was on the playfield, seemed derivative of the 90's Bally/Williams run, not the next (or last) great step up. I'm sure a lot of that, as documented elsewhere, had to do with it not getting the TLC it needed while Williams geared up for the Pinball 2000 project.

Now, be that as it may, it's still clearly a decent machine of the ilk of that era; it's no stinker. But that said I've still been left a bit cold playing it when I've been able to. Maybe I need a hundred plays instead of the ten or so I've had to appreciate it. But as far as grail machines go, its interesting qualities aren't responsible for its price, only its rarity. And it's strangely way too valuable to ever put out on location now, so I suspect it will always remain the kind of oddity that, say, Hercules is - a machine you must try to play once, at least, but you can safely move on without having it in your collection or having put $500 of quarters into it (HELLO, High Speed).

Played a bunch of games. Great shots, fun toys, and loved the speech/call outs. Defiantly want one, but major expensive. That said. The one I played was dirty and some lights were out. Most things worked, but sad to see such an expensive machine not taken care of.
9.460/10
2 years ago
MUX

I played a version that had a computer installed to run the game. It contained classic and extended mode, I tried both and I have to say that no matter which code you play, this game is a freaking blast. It is one of the few games that still feel modern and it can compete with the very best there is in pinball - great and fluid shots, the rules are nice and it generally is a ton of fun to play! There is so much happening and whenever you shoot the ball somewhere, it feels pretty satisfying. One could argue about the train and the guns, but to be honest - I've seen worse stuff going on in games. The duel is super-cool. JJPs the Hobbit borrowed a bit from that mechanism.

I was lucky to play an extremely well maintained machine which felt very polished and new. If you ever have to opportunity to play this one, you shouldn't miss out!

benjocat has this game on the wishlist.

CC is probably one of my favorite games of all time. We play this at Level Up in Downtown Raleigh all the time. Call outs are awesome! Just a really fun game that doesn't get boring. It feels like any shot you make, it will hit something.

Rating it on the original code it's ok, obviously it leaves a lot to be desired. However running it with continued code and it makes all the difference. This game with the continued code is a lot of fun and one of my favorite.

mal7887 has owned this game in the past.

Was wery suprised over this game.Cool and fun to play.

Wery rare pin,so it is wery fun to own this classic.This is pinball history.

A must have in a collection,if you can get one.


Play it if you can.Wery nice pin.I like a lot.

The continued code made this game soooooooo much better and I really like the toys. Great theme
6.614/10
3 years ago
CON

I wanted to love this game, but just could not. It is a good game if you like really long ball times. I gave it a good go at an arcade and got bored of it really quickly. I can see why so many people like it though. Theme is different.
7.400/10
3 years ago
AND

This was a game I thought I was really going to like in person (having played and enjoyed it on Pinball Arcade), but I finally got a chance to play the actual game and I was disappointed. It was't bad, but I thought I would like it more and actually started getting bored with it after several games.
Next12345678
There are 193 ratings (that include a comment) on this game. Currently showing results page 1 of 8.