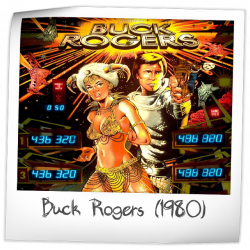 I remember this machine from my college days. Perhaps it's because I am more comfortable with early SS machines but I think that Buck Rodgers is a decent machine but not one I would want to add to my collection. It was one that I played because that was what we had to play on but I was ready to move on relatively soon after!
3.562/10
1 year ago
JIN

I am trying to judge this game fairly according to age and general standard around 1980 - but this table really doesnt feel any good or fun. Somewhat weird playfield design and slow shots that fail to trigger your "one-more-game"-reflexes....

The general impression here was that the game play is uninspiring and one-dimensional. The captive ball was fun - but thats about it on this playfield.

People normally make fun of Williams Big Guns (1987) for the strange stylistic mix of medieval Knights and Space War, but in this area Buck Rogers is even worse - and definitively looks way goofier. The ugly space animal skull between the flippers and the obscene-looking space helmet (head ?...no phun intended) on the yellow robot below the bumper are good examples of this. Outright ugly and cheesy.

Although I have to admit there are some interesting and cool looking areas on the playfield, The upper left playfield plastic- with a martial art style snake and a face painted bad guy- is awesome and would have looked great on Sword of Fury or the ugly Street Fighter II. But this and a few other good ideas cannot save the overall weird and outdated-looking playfield and backglass on this machine.

While speaking estetics; even the drop targets looked like sh x t on this table. But OK- you could easily modify this.

I would not recommed this game unless you have a 5 plus size collection and want to add a cheap beater game with a corny space adventure theme. Lasting power is the critical point, aside from the terrible looks.

Interesting theme, and has some cool stuff, like a captive ball, and drop targets, but lacks many things to be a good pin! WAAAY too few shots on this game....
Return to base is worth waay too much!!
7.292/10
2 years ago
CAH

Buck Rogers with the Pascal Janin PI-1/X4 is a fun game with great sound for a 1980 pin. This is a favorite of guests because it is easy to understand the rules but reaching the top of the PF requires good aim. Targeting the captive ball can lead to a quick drain down the center.

I haven't played this game in many years, but this was one of my favorites in my late teens.
8.386/10
3 years ago
RVJ

Buck Rogers is a great game. Seems very simple at first but there several choices to be made during the game.
Some of the most important shots are the most punishing, just the way it should be.
There are 2 different sound options that can be selected, the second one is awesome.
I only wish there was a spinner up the left side...

Pingball edited previous rating on February 20, 2020.
Pingball has owned this game in the past.

Good asymmetrical layout. Spinner up to the upper lanes, big old bonus collect hole up top, a bank of 4 drops and a split bank with 2 drops each, and nice open pop bumpers. I'm not a huge fan of the captive ball vari target thing, which is a pretty big part of the game, but that's the only thing really wrong with this table to me. Otherwise it's a fine single ball game.
7.455/10
4 years ago
JJL

What a great back glass. Best system 1 in my opinion.

It does not compare to the newer games but for the time period I think this game is pretty good.

I remember playing this and Sinbad at a local arcade. I was always wanted to play this one because of the theme and artwork.

pinball77 has owned this game in the past.

Buck Rogers is a pinball machine that could've easily been better, had it not been produced using Gottlieb's poorly designed System 1 boardset. The theme revolves around the future, and all things space age, but the design and feel of the game lack in both respects. It's a classic example of a title that would be excellent had it been an original theme built around the layout, instead, the theme seems forced upon players.

Sound is good for an early Gottlieb, and the futuristic sounds fit the theme well, but the lack of a continuous background sound makes it significantly more boring to play--remember, this game came out at the same time as Gorgar and Firepower.

Rules and layout are decent. It's significantly easier to get the special than the extra ball on this game: a fatal balancing flaw in the rules that makes this game less fun to play in a home environment. The game focuses on the vari target, and it's neat to see how the game counts the amount of times its required for the player to reset it, and it gives out better or worse rewards based on how many hits it takes, but again, that feature feels better suited to a golf themed game than a buck rogers theme.

Artwork: This is the highlight of the game. Colorful, vibrant, and depth all make for excellent artwork that is engaging and interesting to look at.

Overall impression: This is a game one should have if they are a fan of Buck Rogers. It isn't a bad game, but when compared to other games from other manufacturers that were released at the same time, Buck Rogers really misses the mark.

mbaumle has owned this game in the past.

I acquired this game for free and it was non working. At first I was unsure how this one would play out but once I got it up and running it has really grown on me. I am a big fan of the backglass and love the colors and lighting (since I upgraded to led) overall on this machine. While the playfield has a fairy simple layout it has good flow and this game really moves when set up steep. The sound effects are really good for its age but its a real letdown that there is no Twiggy voice. Overall this game is all about the shots and it can eat you alive but out of 11 other games I always tend to gravitate to Buck Rogers for a fun, fast, quick game that always leaves me satisfied and I'd have a hard time parting with this little gem!

Had this game for 20 years. A pretty fun game even compared to the newer machines .

Doozie has owned this game in the past.

Buck Rogers is an early SS Gottleib game that John Buras shoud be remembered for. My first review of this game was not favorable, at all. However, I recently got a chance to play a copy of this game in good shape that played as it should. Scores and review have been adjusted accordingly.

The Pros:
A cool theme after a late 70's tv show. Nice selection of drops on the left by the orbit and on the right ala Joker Poker kings. Good nudging opportunities at the top of the PF once the ball goes left or right. The collect bonus saucer AND Vari-Target shots behind a captive ball at the top of the PF require true aim! Now the Vari-target advances through 5 stages and then returns to base. This lights up the bonus collect and resets the drops for bonus x multipliers. Do this a number of times (at least twice) to reach 5x. Not only that, but when you collect at the saucer, your bonus drops to 1k. Time to go to work, build that bonus, drop the targets and collect at 5x!!!! I will say that I am glad that Gordon Morrison had the stones to put his GF's name on Pincess Ardala's golden bra. The S U E twins look very nice. Mmmmmmm.... breasssstesssess from outer space.

The Cons:
This game has to be maintained with strong flippers to reach the top of the PF and score decent hits on the captive ball/vari-target. The upper left hand side of the PF by the bumpers is not utilized very well. The ball often hits the metal orbit rail and drops dead back down the PF. The posts on the outside of the inlanes may need to be removed to increase the challenge of this design. WHAT?~?!?!?!?... No Mel Blanc voicing Twiki on this game?!?!? I know it's 1980... but C'mon! Beeee-Deee, beeee-deee, beeee-deee!

The Takeaway:
This deck is a player and one of the better Gottleib System 1 games out there. The more I play it, the more I like it. A good sign for sure. Now, I have always liked build/collect rules on a pinball game and this deck takes it one step further as noted above. This title is a really great playing pinball game, IF maintained (and loved) properly. Imagine that?

I like the backglass art of this game. I thought they could have done more with the playfield layout and game action. Not a bad machine, but a little too simple.
7.653/10
10 years ago
CMM

A very fun (for its time) early gottlieb SS. Gotta love the Gordon Morrison art, the guy was just amazing at drawing the female figure. I enjoy having this pin, even though it is super unreliable.

maldoror has owned this game in the past.