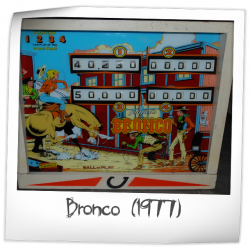 Manufactured as part of Gottlieb's 50th Anniversary in 1977, Bronco is a classic American-West themed machine that's designed by Ed Krynski and has colorful artwork by Gordon Morrison. It earned a 7.0 out of 10 on the Fun Scale rating at IPBD.

Roll the ball over the rollover switches marked with "A", "B", and "C" lamps. Lit letters have not been collected yet. When complete, the end of ball Bonus is doubled (2X for most balls, but 4X for the last ball). Completing the A-B-C Rollovers is one of two requirements for lighting Special on the A Rollover lane.

Knocking down all three drop targets lights the Extra Ball feature, but only "sometimes". There are two Extra Ball lights on the playfield, at the Left Ball Kickout Rollover, and one at the Right Ball Kickout Rollover. In Conservative mode, only one can be lit at a time, and the Alternating Relay is used to toggle between them. An additional wrinkle is imposed though: the Extra Ball is only lit for certain Bonus Lights. As the bonus advances, if the three drop targets are all down, the Extra Ball light will come on and go off, and will cycle from side to side, so the game instruction card describes it as being lit "occasionally".

In addition to this, collecting the lit Extra Ball from the side rollovers not easy, which limits the number of Extra Balls collected. Dropping all three drop targets is the second requirement for lighting the Special. 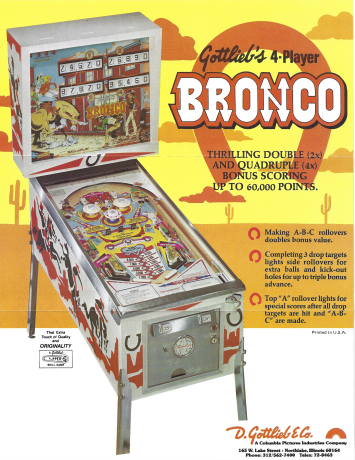 This game has received 15 approved Pinsider ratings and currently has a rating of 7.295 out of 10.

There are 8 rating comments for this game.

94 Pinsiders have this game in their collections.

18 Pinsiders have this game on their wishlist.

We have seen this game for sale in the Pinside Market 26 times. The median asking price is $995

There are 110 forum topics linked to this game, 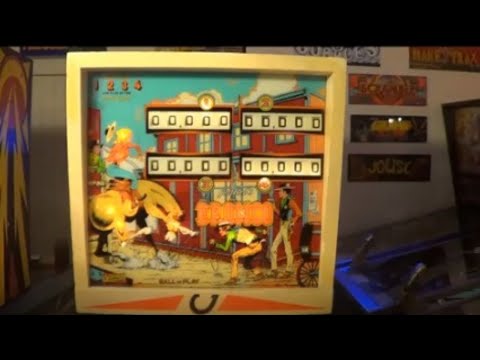