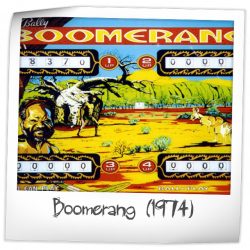 Boomerang is an interesting game from Bally.

The good:
A very challenging layout that essentially cuts to play field in half. Similar to many games that we see today like creature from the Black lagoon or the Black Knight sword of rage. if you miss a shot, you're in trouble and those out lanes are very hungry. shooting for the ABCD targets on the sides is a dangerous necessity for big scores on this game. Double bonus is huge, and this reminds me of a number of different designs that show this feature both new and old. Jim Patla is a great designer trained under the watchful eye of Master Zale. The cadence of the bonus count makes me do the happy pinball dance.

The bad:
the captive ball shots dominate every strategy in this game. Build your bonus and collect specials. 15k bonus comes very quickly unless the lower star rollovers aren't disabled. This also means the game can be very easy to get extra balls or extra games on depending on the game's settings for special. Best played in a 3-ball format as compared to the usual electromechanical 5 ball game. The spinner and the pop bumper garden are negligible in relation to the real scores on this game. This effectively makes the entire center third of the game's playfield not worth shooting.

The takeaway:
An unusual theme Australian Aboriginal theme. Some more politically correct players refuse to play it due to it's depiction of the theme. A demanding layout that when tuned properly, is a real player.
6.116/10
1 year ago
VIC

This one is a surprise, way more fun then it looks to be.

Ericho has owned this game in the past.

Game Play:
This game is a diamond in the rough when it comes to the masses of 70's EM games. It has a symmetrical playfield but can offer some suprisingly fast gameplay. With 8 easy shots right of of the flippers there's quite a bit to aim for. The big "toy" for this game would be the gated pop bumper centrally located in the playfield. Shoot the spinner and watch that ball bounce around all over the place in there for upwards of 10 seconds at times as you rack up points. Just gotta be careful because it can cruise out of the gated pop area and become a quick shot. There's also two captive balls, one kicker, 6 standing targets and two rollovers. For a symmetrical game, its quite fun and not as boring as you would think!

Rules:
The rules are pretty standard for a mid 70's EM. Build your bonus by making shots, shoot A-D to collect a double bonus, when you max out your bonus, the captive ball shots light for a special and the oulanes alternate for an extra ball.

Sounds:
Again, very typical Bally chimes on this game, nothing to exciting to speak of in the sound department.

Art:
I have to say the art on this game is quite awesome looking. Minus one thing, the backglass. It has an Australian Hunter Gatherer theme and its just kind of... wierd. There's a creepy old man staring at you the whole time your playing which can honestly be kind of distracting.

Overall:
This game is a fast playing game that begs you to play it one more time. Most people are underwhelmed when they see the playfield and are completely suprised when they play it and it rocks! Overall, as my first pin, I wouls say its honestly a keeper for me. It sits proudly with my other games

Two year update: This game is still in my collection and gets played all of the time. A true keeper that everyone enjoys playing when they walk into my house. Also seems to be extremely popular in tournament play!