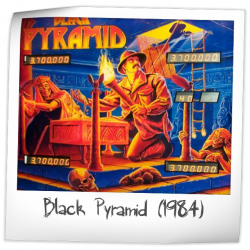 There are 19 ratings (that include a comment) on this game.
Currently showing results page 1 of 1.

At first glance, the table doesn't appear to be too challenging. Once I began to play, I really found that the far right and far left shots aren't always easy to accomplish. I dig the inline drops on the far right. Would've been cool to see the far left shot modified a bit to allow a spinner. The single targets on the left and right sides of the playfield are satisfying to hit, though by accident, at times. Art package and sounds are fantastic and typical 1984. Cool table and theme.
8.248/10
10 months ago
PAL

I enjoy the 1980s sounds on this one. Simple Playfield design but it has nice flow. Simplistic design but still a good game to come back to. Backglass Artwork is top notch. Don't let it fool you.

Lathroum has owned this game in the past.

My guests love the theme and playability. I added LED lighting, which helps a lot as the playfield is pretty dark.
8.783/10
2 years ago
RGR

Super game with one of the best bonus countdowns in pinball.
7.324/10
3 years ago
WSZ

I just purchased and find to be a fun and challanging game. It has a swinging target in the middle which is fun. I dressed w/ silicon sleeves on flippers and now very fast. I find it fun and a challange. Sound is not good, but grows on you. overall a solid machine.

halffast has owned this game in the past.

Beautiful backglass, incredible sound. This is a cool game, however there are only 2 shots to go for, maybe 1 (the inline drops for bonus X and spotting pyramid).
4.931/10
4 years ago
RHO

Art is great. Theme is good. Gameplay is a snore. In-line drop targets on the left are a neat touch but can't save an otherwise bland layout. Ten years earlier, this layout was Bally's bread and butter—games like Evel Knivel, Kiss and Six Million Dollar Man relied upon hooks like the dual orbits and a top saucer. It also takes away one of the best features of the above games: the spinners. This game just seems tired and boring, especially if you remember the game was released concurrently with games like Space Shuttle. Greg Freres' fabulous art package alone can't save Black Pyramid. Just another example of Bally's 1980s futility en route to selling out to Williams.
7.098/10
4 years ago
D L

So, this is by no means a great game, but it certainly isn't bad. It has fun shots, and a decent amount of risk/reward. The main issue is that it isn't dynamic- it doesn't look fun, so a lot of people dismiss it

Well, I didn't expect to say this about a Bally-Midway game from before the Williams years, but: I actually kinda like this one. Fast paced, pretty tough to play, basic but nice rules, great backglass.

I'm glad this one has powered slingshots, as even that was not standard for a Bally-Midway game from around this vintage.
8.064/10
5 years ago
BJF

There's a bunch of stuff I really like about it in the context of pinball history. By the time this game came out in 1984 pinball divisions were reeling from the onslaught of video games, and trying anything and everything to move units. In this case they made an intentionally inexpensive to buy, and simple to maintain on route game (they entire play field is 100% accessible from the top. It has all of 7 moving parts (2 flippers, 2 slingshots, 2 bumpers, and one kicker outhole) so there isn’t much to break. Just funny to see that from 4-5 years earlier Bally was doing advanced cool stuff; complex rules in centaur, first recessed play field in xenon (to accommodate the tube), but then they merged/acquired with midway and shifted all their talent to video games; to basically have the pinball division go defunct. Bally never really made another good game again. Same fate awaited the original Stern pinball; dies by the mid eighties. In contrast by the mid eighties williams was the dominant pinball producer (acquiring bally/midway pinball in 88.) and making basically 100% of the golden age of pinball games. But you know all that.

colorado_cabrio has owned this game in the past.

This is my first and only pinball machine, so probably some owner's bias here. :P

I'm in the minority with my love for the artwork on this one. That's not surprising though because I love RBION's artwork even more. RBION is my 'holy grail' machine and it's gonna look awesome sitting next to this "Pith Helmet Pinballer".

For me, BP is not a deep game at all. I don't know if I have it setup wonky or what because it's fairly fast, the drop targets are a b**ch to hit consistently and keeping the ball outta the center drain requires a lot of physicality. That's okay though, because I love fighting with it and getting my ass kicked. Then when I get in the zone and rack up the points, it's that much more awesome.

Sounds are decent for the era. Sound quality however....... CheapSqueak.

All about building the bonus, found it to be a tad boring.

Allow me to disagree once with Caucasian2step...
I like that game. I can't say I love it, it is relatively simple, even basic. There are better games from the same generation.

Still... the swinging target is a risky shot for sure. But sometime worth it. In line drop targets are fine.
The two most important shots are relatively narrow and risky as well.
8.409/10
7 years ago
LG

Basic pin for his time but still enjoyable, addictive and fun gameplay.

Guppy1977 has owned this game in the past.

I really want to like this game as it is really pretty, but is just pretty darn dull. I tend to like progressive drop targets, but these just lead to easy drains and most of the time isn't worth the trouble. The artwork is really pretty good and is a very pretty game even at night, but it just doesn't hold one's attention very long. Pity.

*EDIT* 11/20/13 I have now played this game A LOT since I first rated it and I have done a 180 on this game. It really does have some good strategy and once you 'figure it out' it really is a nice pin. It is still very pretty and the sounds are fun. The game needs to be set up well to be fun IMO. It was unlevel for such a long time at Arcade 1984 and that made it nearly impossible to play. I am leaving my old review up to show that this game may need some time for full appreciation.

Black Pyramid is an indication of what happened to Bally and what the company had to do to survive in 1984 after the big video game crash. Not pretty.

The Pros:
Vivid artwork and designs on the pf and the cab.

The Cons:
Other than the artwork... not much else. I really want the egyptian skeletons to get the goofball in the pith helmet. Boring gmeplay and PF. Inline drop targets should make a design fun... BUT IT DOESN'T. The Kordek swinging standup is a sucker shot par excellence.

Great game for scoring. Love the backglass. Nice flow to the game and the kids absolutely love it because it's not too fast.

Acampero edited previous rating on August 16, 2012.
Acampero has owned this game in the past.

What a lousy game,especially for a 1984 release. if this was released in 1978 it would be your average forgettable game. Decent looking machine,could have been much nicer looking. i do like the cabinet art though. Boring play with nothing to do and Terrible sound,i couldnt wait to get on to the next machine.

Zep
1
There are 19 ratings (that include a comment) on this game. Currently showing results page 1 of 1.