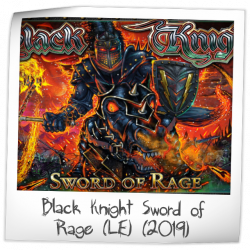 This game ranks 2nd in the game group "Black Knight: Sword of Rage". The group itself ranks #30 in the Pinside Pinball Top 100.

There are 37 ratings (that include a comment) on this game.
Currently showing results page 1 of 2.

Ritchies finest - Never okayed the original but the new one is amazing, I have the stern topper as well which I must say is probably one of the best toppers ever made.

Hopefully another code drop soon will make this pin jump another level!

Similar to the Premium this game is better with the upper playfield. I don’t think this title ever got the day in the sun it deserves. It is a very exciting and challenging game with lots of things to do and definitely needs some strategy to blow up scores. The animations are great and the black knight trash talking you it a great add. Definitely a game with one more game feel on it. Code as definitely come a long way to improve this one and I know Tim will keep this code updating continuing to make this a awesome game
10.000/10
3 months ago
NJM

an amazing game, tough, fun but oh do you want just one more game. LE/Premium is the one to go for because of the upper playfield, when that black knight music starts kicking off though b00m! its so amazing!

I have a love hate relationship with this one. The music is awesome but too repetitive. I love the taunts. Most brutal game ever (that can be good or bad). Not many toys unless you count the shield where you lock balls and the ramp spinner. I do like the cannon lock on the upper p/f. If I owned one I don’t think I’d keep it long.
7.236/10
3 months ago
MRO

I was impressed as to how they made the game modern and it still feels like black knight!
9.840/10
4 months ago
HSH

Just got my topper from stern for my LE and love it! This game is probably my favorite pinball to date out of 50 I have owned and 150 that I have played. Great job Steve Ritchie and Stern!

I love the upper playfield! Hitting the loop over and over is a great way to score while being safe. Hitting lock target help defeat monsters. Locking balls is easy enough to do fill-up multiple times each game for me. Love the lower playfield and the 3 various ways to get multi-ball. The retro multi-ball is awesome to experience! Topper integration is the best. Love the new code with more sounds and voices. What a total package!

A very fast, extremely fun pin. Artwork and animations are some of the best I’ve seen lately and right up my alley. Music is awesome, callouts are decent. Code could use another update but as it sits is a very entertaining and challenging pin. Most fun I’ve had since maiden.

SpinnerAddict has owned this game in the past.

I have only played the Limited Edition, that being said this game rocks! Love the code and having the different modes and shots each is a little different and the game play and flows works great for it. The upper play field is a lot of fun. I think the most satisfying shot of almost any pin I've played lately is the upper catapult shot, I feel like a god when I can nail 3 of them in a row on my 1st ball. There isn't one thing I can think of to change on this game. Its great as it is. Nicely done! Also with the last code update I love all the different mode champion scoring, makes for great bragging rights at the barcade!
8.500/10
7 months ago
NEO

BKle is an amazing game. Steve Richie hit it out of the ball park again. Its a tough game. If you don't make the shot there is a good chance the ball will rocket back at you so quick you will hardly be able to react. I'm not a fan of upper playfields but this one is different then most. It is similar to whitewater but has more shots. The only thing I don't like is I'm afraid the upper playfield is going to get scratched over time. I already have minor scratches after 100 games and its only going to get worse. The artwork, lighting, and rules are awesome. I love playing against the monsters and the multiballs are intense. Great game from a first-class designer. Good job Steve.

Awesome Game! Loved playing it! Super fun! Best Toy I’ve seen on a game in a very long time! The heavier music by Scott Ian is incredible and definitely to my liking. Additionally, I really think the upper play field is a must have! Can’t imagine playing this game without it. Lastly, regarding the Topper that will be coming out for this. It has to be the best Topper I’ve EVER seen on a game, period. Can’t wait to see it in person.

Aqua1122 has this game on the wishlist.

Awesome package if your a Steve Ritchie and Black knight fan

As a fan of the original Black Knight pins I had high hopes for Black Knight Sword of Rage. After playing a handful of games on an LE I walked away disappointed. Is the game bad? No. Could it have been much better? Yes. First off I found the main music track to be extremely repetitive and coming across as always being at 100% heavy metal versus having a build up as any main track should. A track like that would have been much better suited for a specific mode (or hurry up) but as a main track it becomes mind numbing in my opinion.

In terms of toys I'm impressed with the interactive Black Knight toy. The toy has a moving metal flail and a moving shield that reveals an additional shot. However, beyond that the game is a bit lacking in features. Whereas Black Knight 2000 had a larger upper playfield with a motorized drop target bank + a physical ball lock the upper playfield on BKSOR features a large piece of metal with a few plastics screwed into it to represent a ball lock. For $7,500 - $9,000k depending on model there's no reason why the ball lock shouldn't have been built around a detailed 3D mold. Besides shooting around the ball lock there isn't anything else to do on the upper playfield. The virtual kickback also hurts the game as it makes it feel less feature packed compared to the last pin in the Black Knight franchise that was released 30 years ago.

Finally, the heavy metal soundtrack, muffled and bass filled Black Knight callouts, and frequent insult callouts thrown at the player make the game come across as taking itself too seriously. As I said Black Knight Sword of Rage isn't a bad pin, and I'm sure a lot of people will enjoy it. I was personally just hoping for more of classic rendition of the theme with a modern twist (with some comedy tossed in) over the cyber knight + heavy metal take.

upper playfield is a joke and takes away all the flow.
You cannot backhand the ramp because it's a U-turn ramp.
pro all the way !!!

I owned the original Black Knight 2000 and loved the music and chorus ‘You can do it’ and ‘Hurry up! I was disappointed in this version. Definitely not up to the original. Otherthan that, it’s obviously a prettier game. B+ for effort. I think if I can ever find a collectors version of the original, I would get that instead
6.041/10
10 months ago
AKB

Upper play field is a joke. Pro version is better. If you want a game like this one get game of thrones it is far more fun. Art is good but play field layout is limited.

Game is one of the best out there. Code still needs some tweaking but the layout and the overall feel is amazing. Can be a little difficult in the beginning but stay with it! High scores are very rewarding. Besides IM, this is my favorite Stern in recent memory.
9.800/10
11 months ago
RET

My GF and I both thought before playing this MM was our next machine. We now are looking for a BK3 instead.

The shots feel good, you can tell steve designed it and the toys rock. I'm so excited to add this to my collection.

Overall:
This game could be amazing, however, catapult just needs readjusted.

After having so much fun playing the PRO, I could only hope that the LE would be better. I’m happy to report that I am NOT disappointed. I never was a big fan of BK or BK2K. But I’m a huge fan of Stern’s take with BKSoR. The upper playfield only adds to the badass fun. The Catapult ball lock is simultaneously easy to access but still challenging not to mention the all out goodness of Catapult multiball itself. Love it! Afterwards I went back to play the PRO just to make sure and it was as fun as ever. Stern hit a grand slam with these machines. I hope Elvira 3 measures up.
9.660/10
1 year ago
AMM

Game is a blast to play music and animations are awesome and the toy is one if the best in some time. I think the upper playfield adds a lot.

Still need some more time playing this one but so far it's fantastic! Right in line with the BK theme and story. The BK toy is just fantastic, best new toy in a game in a long time. The custom guitar music fits this theme perfect and is adrenaline producing. Really fast game! And I really love the awesome animations they've done. A little more code polish and this game holds its' own with any other out there.
Next12
There are 37 ratings (that include a comment) on this game. Currently showing results page 1 of 2.