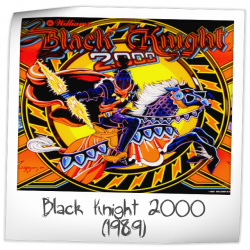 There are 164 ratings (that include a comment) on this game.
Currently showing results page 1 of 7.

The Black Knight upgrade. Still one of the hardest states out there it's also way loud. You may tire on this one big. Has the manga save which is okay. The ramps wear you out on a few plays. In the end you might go back to it. It's about as hard as part one. The latest Black Knight has a cool easter egg I found. Not bad if you like a more challenging game. Likes the dial though.
9.420/10
5 months ago
???

This is a game that caught my eye many months ago. It’s music, light show, cool factor and call outs got me so bad that I hunted one down till I found one. It’s fantastic to play and I often am left singing / humming the music well into the night! A must have in my opinion!
8.852/10
5 months ago
JAL

The second installment of the black knight series, moves in leaps and bounds with the advancement in technology.
Single flipper on upper playfield can be weak at times but its mostly operator based. Gotta have that timing.
Still super fun and long lasting game that challenges you to up your game and has some tricky shots that do just that.
7.819/10
5 months ago
CWH

I don't have this machine on the Xbox because it is not featured on the Stern Pinball Arcade collection, but maybe in another collection I might just find it. Anyways, I did play this at the arcade across my mom's against TickleFeather369 during the era of casual pinball matches, and my favorite feature is the lightning wheel. Because I don't have ad much skill on a real machine, I have never gotten to the wizard mode on this machine, but if my research is correct, it is the first machine to have a wizard mode. The lightning wheel and the wizard mode is what defines this machine from the other classics. My only problem is I am not too much of a fan of the old machines, but it plays well for its time. I also enjoyed the magna save. Good way to save yourself from certain death. Overall, decent machine, can't complain.
8.025/10
6 months ago
MRG

Theme, music and artwork are all awesome.

Although I love playing this game on location, it turned out to be a real dud in my small collection (2-3 games). Over just a few months it felt repetitive. Left flipper hardly does anything. All there is to do is get the ball to the upper playfield.

ArtPylon has owned this game in the past.

I love this game!! I hope I own one someday. Most of my friends disagree with me on this one, they say it's too right flipper heavy or too one dimensional, but I love the looping in the upper playfield, the music, and the artwork. Those 3 things are great enough to make this game a winner for me. The music just oozes 80's and that's part of why I love it, it puts me right back in an 80's arcade.
Either it moves you or it doesn't. If you're reading reviews, you probably already know how you feel about this game. "Aaaaaahhh Ooooohhhh..."

Wade has this game on the wishlist.

One of the best Williams system 11 machine when it comes to music and callouts. The flow is perfect (thank you Steve Ritchie) on a nicely waxed playfield. Rules are super simple and the mirrored backglass is a very nice touch. First pinball of its time to include a wizard mode (King's Ransom)
8.448/10
9 months ago
ASH

Fast, fun and just one more game. Those who say this is a right flipper game, take a risk, play some shots, chill out.

This is such a fun and addictive game to play, easy to pick up, tricky to master and the light show and artwork bring people in.

The sound is initially annoying as it sticks in your head, but you can't help loving it as it drives you along through the game.

I have always liked this game since I got it in 1997. Can be a fast game for sure.

The game that got me into pinball. Heroic score and sounds along with hugely satisfying loops. A classic. Should be ranked much higher. Game rules are easy to understand, so no card is needed. Once you get 20 games in you should be getting used to the upper playfield and how to get back up there. Some game like Flash Gordon is very hard to get back up to the upper playfield. This hurts young players. I love this game. Almost perfect.

I tried BK2000 at FlipOut in London because it had completely captured the attention of my five-year-old son.

Great artwork, great music and sound effects, really interesting layout with the upper playfield. Unfortunately, during my plays, I wasn’t sure of the rules and how to do well - but I am keen to explore the game further. That is usually a sign of a very good pin!
10.000/10
1 year ago
J

Absolutely love this game. Best music in pinball. How come there hasn’t been a band like apocalyptica to cover it with a classical twist? Super fast and fun. It’s absolutely gorgeous. A masterpiece.

Pinicus has owned this game in the past.

My brothers first machine purchased. 20 years and it still plays great. LEDs made a huge difference. I think the price you can still pick this game up is a steal. It’s a collectible. Still ranked in the top 100. Upper play field is super fun. “no way”. It is so unique. I keep telling my brother he should get the new sword of rage to go with it!
9.220/10
1 year ago
LXL

Ridiculously enjoyable and fun while maintaining the challenge that keeps you coming back for more.
9.380/10
1 year ago
TAB

Easily my favorite game that I played there. Love, love, love the music. The game is beautiful. Love the flashing lights and the music. I enjoyed the game play. I have been watching how it plays on YouTube and I was able to get the gate thing down, but never got more than 1 ball across the bridge and locked. I was able to lock some balls several times on the lower play field and got multi-ball a few times. I was able to use the magna save once, which was cool. I really like the game and I thought it was challenging. Its a beautiful machine. One of the rubber band things on the left side of the lower play field was broken on this particular machine. I could see owning this one. It's an impressive machine, beautiful, flashy, and such a great song. I played 3 or 4 games on it.

DanMarino edited previous rating on April 06, 2022.
DanMarino has this game on the wishlist.

Fast, innovative and original. BK2000 took the huge upper playfield concept from the original and added the bridge. Very clever and requires real skill and timing to hit that upper bridge ramp consistently. True, the game is essentially all about the upper pf and hitting the upper ramp to start Ransom mode or multiball. But, with a kickback, Magna save, 3 ways to reach the upper pf and deadly speed, this game is a thrill to play. Throw in a killer soundtrack and funny callouts, and you have a pin worthy of legend status. One of the best Sys11 for sure.

Very polarizing game for me. I really enjoy the artwork. It is fantastic, one of the best looking games out there. The music is killer also. Plus Magna Saves.

It sadly falls short for me where it matters the most, in the PF layout. I also find the voice acting/singing to be repetitive and annoying.

Tough game to rate for me - played both the original BK and BK2000 on location so the nostalgia factor is there. There's a lot to love: the innovation, the programming/rules, the theme, the speed, the music, and the light show. So what's not to like? Well IMHO, the layout and the gameplay/flow just don't work well. Half of the PF is a one-flipper wonder, and though there are shots to make, the huge drain gaps makes ball control so random that it feels more like Humpty Dumpty 2000 than BK2000. The lower PF has its own issues as well - you either 1) hit the shot and the ball disappears under the upper PF (no visual "payoff") or 2) you miss the shot and the ball comes screaming back at you (if you're lucky or drains SDTM or outlanes. In short, you have two half-sized claustrophobic playfields, and the two don't feel nearly as connected as they did in the original BK. The left ramp up to the upper PF is nice though. I've played both games A LOT both as a young'un and more recently, and BK2000 looks and sounds beautiful but the play just doesn't earn my money.
8.189/10
2 years ago
DLL

The music and BK taunting keeps pulling me back in! I know there's understandable critique about its single flipper dominant but I'll play the other flipper for variation and fun w/out worrying about the score too much.
6.908/10
2 years ago
TKM

Lights, sounds, call outs, artwork...this one has it all. It is one of the QUINTESSENTIAL pins of the era. Throw in the fact that they made a lot, so parts/pieces are easy to find...and it is a system 11, so it is easy to work on and built like a tank. This is a pin that fits in ANY size collection. It works on location or in a home game room.

Best in the black night series in my opinion. The upper play field is awesome and has a ton of replay value.
8.822/10
2 years ago
NEO

Possibly the best background music of all time. Great shots fast action. A sequel to remember.
9.688/10
2 years ago
HSH

Excellent game! Fantastic light show, music and game play. I would expect to get tired of this eventually but has not happened yet.

turbo2nr has this game on the wishlist.