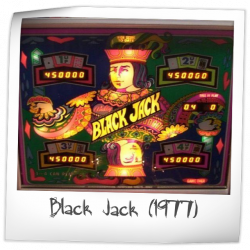 This game has received 13 approved Pinsider ratings. 12 more approved ratings are needed to get a rating and for it to be eligible for the Pinside Pinball Top 100 ranking.

Not sure what to make of this game. I know it’s a popular or at least common choice for tournaments, which is a good sign for the players. Speaking as a casual player or someone who´s just looking for fun- well, this table isnt particularly fun.

Admittingly the scoring is well built in to the gameplay, utilizing the spinner to its fullest, but the actual playfield action here is nothing short of a bore.

The game lacks both speed and anything that resembles allure. The lack of drop targets, which should be mandatory on any cardgame themed pinball from this era, doesnt help matters either.

From a estectical viewpoint, both backglass and cabinet art seem rather uninspiring and dull. This impression is not helped by the strange colour combination on the playfield.

Strange and disappointing game from Bally from the same year that they released the top game Power Play and followed, as another contrary example, by the classic Harlem Globetrotters the year after that.

Picked this up by chance. Was so happy to have at least one 70s solid state Bally in my collection as this era of games is getting very difficult to find in Australia in decent condition for a reasonable price. Mine needed a few easy fixes. This is a good simple game. Can be brutal but as a 5 ball game you usually get a couple of decent balls. The implementation of a game of 21 onto a pinball machine is actually well executed. It's a fun game. One of the advantages of games like this is the simplicity, both for players and maintenance wise, as I really haven't had any problems since the initial fixes. This is a good option if you want a EM sale game but in a solid state so you don't have to worry about the serviceability issues that go with EMs. Sounds are very basic, art is OK. Can't see this leaving anytime soon.

Very cool concept, improve your hand while avoiding doing the same for the dealer, then cash in at the saucer. Very nice spinner to rip and the upper lanes are worth something too. This is a great tournament game, one of the best from 1977.

This is like so many other games of this era. Light the spinner, rip the spinner and multiply bonus. I had never seen or heard of this game until I was able to play one recently at the PAPA facility in Pittsburgh. I thought it was fun and would be interested in learning more about software settings. The dealer and player hand change was controlled by the targets and the pop bumpers. After a spinner hit the values would change and if you werent winning a hand you could send it back up through the spinner. It would be nice if you were forced to hit the advance hand targets instead but, still a fun rip the spinner game. I'd buy one but, I don't think its a long term keeper.

Winball_Pizard has this game on the wishlist.

Simple game that is a blast to play.

I enjoyed playing this in its day when I was a kid. It was the only pin located in this rundown service station.
A decent game, but too one-dimensional to want to play for long. Not much to shoot for, but a good challenge to try & build up to the special - when your hand is better than the Dealer's shoot for the saucer to score 2x 3x 5x EB then Special.
The backglass is cool.