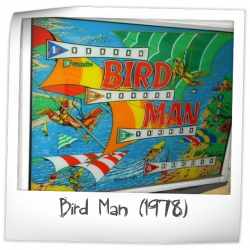 Bird Man is a game I came across at the PAPA facility. I had never heard of it or played it before. Now it's on my "want" list.

The Pros:
A well laid out PF with long and short shots. The Risk/Reward of the layout is very well done. The big feature is the Spinner embedded in the PF. This spinner is needed to raise the value of the top saucers and collect the big points. The trick with this is that the spinner has a nasty habit of putting the balls out towards the outlanes. These outlanes are Oursler (tm) worth for their ball gobbling ability. Downright evil I say! There are drops on the upper and lower PF. DO NOT shoot for the lower drops from the flippers. The geometry of this shot leads to above mentioned outlanes in a jiffy. I can't remember the last time I said Jiffy... hmm... The A-B standups above them are necessary for bonus doubling, but still have to be shot with a wary eye. Build and collect bonus (that alternates from side to side) will keep you on your toes and eternally entertained by this game. The art package is hot and would'nt you know it... those wacky Spaniards did it again with the gameplay.

The Cons:
Will I ever see one outside of Carnegie, PA?

The Takeaway:
When you see this game, play it. Then play it again and again and again. If anyone has one for sale, let me know. I am VERY interested. This is a damn fine game.

Update: had to travel 2 time zones to pick the game up. It is a very hard game to play. Since I have owned it for nearly 2 years I have never rolled it. Bonus max is 200k and the game is set to 5 balls. This game is that hard to play. A true challenge and a damn fine game.