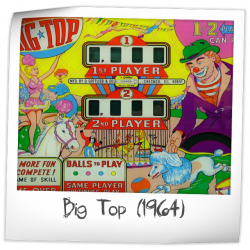 This is a very complicated game...in a good way. This is a tournament players dream, but no one really knows about it because it is so rare. If you have the chance to play or buy one, do it.

Daditude has owned this game in the past.

I'm biased, this machine is my first and has significant sentimental attachment that I will not go into. But, trying to be objective and rate this machine that is relatively rare. It is circus themed and that may not appeal to some...but has great nostalgia value as Barnum is now gone. It is clearly themed after "The Greatest Show on Earth" by Cecil B DeMille. If you haven't seen it, check it out. Especially on the backglass with the clown and dog which represent Jimmy Stewart's character. The gameplay is actually quite fun. This was the first Gottlieb 2 player game that had an add a ball feature. There are multiple ways to add balls. Score alone will do it (every 2000 points by default). Hitting back targets 1--4 (quite challenging) will get you another ball. And upper center rollover targets after lit will give you another. Each added ball is represented by a ball showing up in the backglass via a rotating feature. Hard to explain, but looks cool and the loud know really lets you know you got one. And you'll need those extra balls because of the small flippers and huge flipper gap. It has 4 flippers and you'll use them to work the ball back to the upper playfield to try to hit add a ball targets. There are lower rollover targets to light up one side of the playfield bumpers to turn 1 point hits into 10 point hits. And an evil red rollover in the very middle of the lower part of the playfield that cancels those multipliers out. It's a great game and is strangely addictive, especially once you get a good game going...you'll go back for more. I added LED's to mine and really lit it up so it holds it own right next to my Hobbit. Check it out if you get the chance.

I really like this game! You gotta love the circus/creepy clown aspect of this game. The animation of adding balls for the clown to juggle in the backglass is pretty cool. There were only two 60's two player AAB games that Gottlieb produced and this is one of them. They only made 750 of these so I highly doubt there are more than 50-100 of them left in existence. These are the ways you can get AABs. The first is lighting up A,B and C, rollovers. You light them by getting the top single rollover. It will change from A, B or C as 1 point scoring is scored. Next you score one of the three roll over targets that are lit from scoring the top roll over target. Another way is scoring the top stationary targets numbered 1-4. You have to light them in order. 1 then 2 and so on. All of these goals don't reset either on ball drain , player change or even when the game ends. You may turn on the machine and have 1-3 lit up A,B, and C ready to collect for 4 added balls with a irritated 2nd player waiting to play. (can be a draw back of the game). The last way to collect an AAB is scoring 1000 points. (This can be adjusted for different amounts in the backbox.) The bottom of the playfield is sparse and creates quite a challenge of keeping the ball in play. There are two "off" button roll overs and a "on" button rollover. These roll oevrs eithe light the pop bumpers for 10 points a score or they are off for only one point. The outlanes can sometime be brutal but at least they either score 100 or 300. The light lighting up "300 when scored" alternates between the outlanes during scoring.

Rat_Tomago has owned this game in the past.

Great EM fast play. Have to make the shot to turn the bumpers on and off is awesome. ALso the 1234 for an extra ball is great to shoot at with the top flippers

way2wyrd has owned this game in the past.