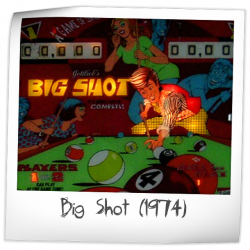 One of the few EM tables I'd like to own. The challenge of collecting all the drop targets is easy to understand and hard to pull off. I enjoy coming back to this one.

Grayont has this game on the wishlist.

This is a particularly wild game even for its era(early 70's) and it doesn't have trouble draining off the initial launch - no extra balls or stoppers or kickbacks are to be found, the only margin of safety comes through a gate off the right hand outlane triggered from the saucer, and even getting that is hard.

In addition to all that the scoring is bonus-weighted(so tilting is really punished) and the bonus multiplier is arbitrarily bigger on the last two balls, which gives it a rubberbanding quality in competition - you can't grind out advantages in this ruleset, you just have to hope you finish with your best play.

It works, though. This game does give a "high stakes pool" feel and the layout rewards both accuracy and calculated carom nudges. It's symmetric so it isn't as deep with shots as other games, but that's compensated for by being such a drain monster. The targets are crunchy and satisfying, with a fine line between safe shots and suckers.
7.637/10
4 years ago
???

My favorite EM of all time. Simple and makes you want to try and get all the targets down in one ball (very satisfying when you do it).
8.169/10
5 years ago
MJH

I am not a fan of the really old pinball games but this is is... ok at least. the flippers are a good size and the gap and layout are good. there's just not a whole lot of variation here. plus the play field is very wide open. only thing that counts are the side targets. There's no real sound here just basic bells and whatever.

There's really little replay value even with 5 balls. It's not a bad game and the graphics on the play field and stuff are nice but it just feels dull and dated. There isn't even a special sound when you get all the balls lit up.

A great classic EM that requires nudging if you want to keep playing. I love the idea of knocking down a set of drops and hitting the special for an extra ball. The art is simple but great. It's just a really fun game that will keep you coming back for just one more.
6.582/10
7 years ago
AMK

Here's a table that looks super innocent and simple, but it's actually quite a difficult and unforgiving table. One of the oldest tables in the game, Big Shot has no ramps or loops to give you any sort of break. Big Shot is a billiards theme table where the gist is to hit all of the solid and stripe ball targets, as well as lighting up the 8 ball. When this is done, a jackpot can eventually be won. It is a very simple premise, but the game has a definite learning curve. There is very little saving you from losing a ball on this table, so you'll have to do some table bumps pretty often to try and keep the ball from going bye-bye. Big Shot lacks any sort of soundtrack (due to the age of the machine), and I like it and its vintage feel. The lack of sounds outside of the ball pinging around off targets and bumpers is strangely... soothing, and will also likely keep you focused on trying to hit all of the targets on the board. Big Shot is one of the more frustrating tables I've played, so expect a few fits -- especially when you score a ton of points on one ball, and quickly lose your next two or three (that's right, there are five balls on this table). Pinball as a whole is pretty diabolical at times, but this is surprisingly one of the more sneaky-hard ones.
4.482/10
7 years ago
MDK

It is okay for a classic but it seemed kind of bland. Points did not seem equal every ball. The theming is really boring. I don't play this table very much except when I want a slower game.
8.134/10
9 years ago
CDF

The drop targets make for a great challenge, and trying to hit hem all keeps me coming back! The theme and art mesh with the gameplay as well as any game of this era. Great challenge, very addictive.

Big Shot is a classic game that needs to be set up with speed in mind.

The Pros:
A simple and well thought out design that makes the most of the drop targets that Gottleib is known for. The sharp angle on the banks make sure that your shots have to be on target. That last target up on the table is always the tough shot to make and the most stressful. Watching that ball drain with only one target left is oh so deflating. Makes you want to play some more...

The Cons:
Scoring is unbalanced with bonus being too heavy with the last ball. You'd better play the last ball the best you can, because that is where the points will come from 3k for each drop target put down. 1k, 2k, and 3k. That's the progression we have on this deck.

The Takeaway:
An unbalanced rulesheet makes for gameplay that is unbalanced toward the last ball played. It's a shooter that could be so much better. The most you can do is wax it up, steepen it and take the lower bumper by the inlane/outlane entrance by the sides of the table... and you might have a player.
6.899/10
9 years ago
ATE

Big Shot & Hot Shot are some of my favorite Gottlieb e-m type pinball machines. Good playfield layout & game play. I like the backglass and playfield artwork, but cabinet artwork not so good. Lighting and sounds were good for mid 70's era. I liked playing Big Shot in the 70's, and still like it in 2012.

Pinball-is-great has this game on the wishlist.