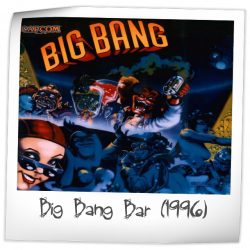 There are 80 ratings (that include a comment) on this game.
Currently showing results page 1 of 4.

I love this game!! The local Ann Arbor Michigan show has one and I go there annually mainly to play this game. I love the art, the unique shots, the old school aspects like drops and kick back, and of course the adult theme. The dots are super cool. Many say this game is popular just because of the rarity. I think it has so many great aspects and it is nice to have an original theme. Yes, the story of the game and the rarity bring some mystique to it. But this is an auto buy for me if CGC does the remake. I wish more people had a chance to play it and am so grateful the VFW in Michigan has one! If you get a chance give it a few plays.

hockeymag8 has this game on the wishlist.

What a great game! Completely worthy of the praise it receives. Beautiful and fun to play. I haven't flipped all the Capcom pins yet, but I bet this one will remain my favorite.
8.132/10
1 year ago
CEC

Again I get to leave a review thanks to a collector who has been gracious enough to invite me over to enjoy his amazing collection. The first time I saw BBB standing alone away from the other pins in his collection, I was very new pinball. I had no idea what it was (or how lucky I was to be playing it) the first time I flipped it. I've since had several goes on it and I am alway drawn to it. Not for the novelty of flipping such a rare game, but more so because of the art and the fact it's just fun to shoot.

I'll admit the second time I played it (after some research on the game), it was about the novelty of playing a super rare gem. But every game since then has just been because it's a blast. It's a fast game with some quirky stuff on the playfield (like the neon ball return and the captive ball setup). Capcom did a great job of applying the theme to every square inch of the game and making it very cohesive. I would love to see someone go in and really polish off the code/rules (like adding a wizard mode) because this game deserves it!

This game is a real looker, but the gameplay doesn't match the great looks. If someone were to update the code this pin could really be something. As it is it doesn't have a great amount of staying power, but it is very fun to watch. The tube dancer is one of the best toys in all of pinball!
7.448/10
2 years ago
CUZ

Cool game with a wacky theme.
I really like the left ramp lighting (flat LED strip under clear ramp) more games should use this effect, plastic dancer is also unique.
8.132/10
2 years ago
???

Some of these so called RARE games are actually VERY overated but not this one... this game is really fun! I hope Chicago Gaming remakes this classic. Would love to have one.
8.512/10
2 years ago
BEN

benjocat has this game on the wishlist.

Most pinballers fall into two categories, those that covet this machine and/or want to play it for the first time because of its rarity and nostalgic history, and those that think it's overpriced status symbol and not worth anywhere near what it commands. Both have some measure of truth.

Regardless of your opinion, it's hard to argue against an excellent original theme integration, which combined with a incredible story of a bankrupt pinball company and one man's dream to finish the machine, resulted in pinball's modern holy grail. It is a work of art to see, with the UV reactive glow in the dark cabinet and tube dancer that almost obnoxiously moans throught the game... fortunately this can be turned off in the settings. Mine is never leaving, I overpaid for it but don't care, even if its remade.

Love the theme, but was let down that there is no wizard mode. Some cool features i haven't seen on other machines, like the captive balls, and i like the neon tube. Simple rule set. It would be fun to own as a novelty machine, but definitely wouldn't be my go-to machine in a collection.
8.980/10
3 years ago
MJS

Finally got the chance to play Big Band Bar at Pintastic 2017 and was pleasantly surprised by how it played. It is colorful, great artwork and plenty of shots. It showed where Capcom was going if they stayed in the business and it is a shame they left. It is certainly one of their best machines.
8.189/10
3 years ago
PAV

Really enjoy it. Great colors. Didn't feel as sturdy as some more modern games. I'd want one for the adult theme but the price is out of my reach for sure.
9.056/10
4 years ago
LEW

I love the artwork, theme, music, sound and overall fun of this game. This game is fun, its downfall being is that it would not be a good game in a small collection as far as gameplay. It is fun but not deep in the least.
8.148/10
4 years ago
FBR

Well, this is one for the collectors.

When I play it, it feels a little like an 80ies pinball machine.
Game is OK.
The ball locks are pretty awesome and so is the left ramp.
Only 200 made, so a must have for any pinball collector.
7.288/10
4 years ago
YOS

Very nice artwork and a decent layout make this pin to be an above average experience but not much more than that. Ramps, drop targets, captive balls, 3 pop bumpers, its all there. The flow was so-so. Overall the graphics are better than the game play. Nice machine to play at an exhibition but way to expensive to own. For that kind of money there are more fun machines out there.
7.887/10
4 years ago
DDH

ImGoing4Broke has this game on the wishlist.

This game has great art and adult theme, a really nice feeling ramp, but the gameplay and rules aren't my favorite. It's certainly an interesting game, but not even my favorite Capcom machine. I toss some tokens into it every time I'm at Flippers and have yet to fall in love.
5.879/10
4 years ago
PPP

Was really looking forward to playing this at Banning. Boy, what a let down. Not a bad looking pin at all but the gameplay was very average.

Thought there would be more substance to this game. Did not really excite me while playing. Although it has some neat features, not much for gameplay. Really cool theme but I felt that it just was not stimulating. It's as if people buy this game just to say they have it in their collection. I have just as much fun playing older Data East games. At a fraction of the cost!

A game that remains "out of reach" for most pinball collectors for more reasons than cost.
It would have been Capcom's greatest pinball success with no doubts.

I have had the opportunity to play (and own) multiple versions of this machine over the nearly 20 year history, both original prototypes and the remake.
Both types are NEARLY identical in construction, but the remake has some advantages, previous noted.
However, standards of construction are less than a standard Bally/Williams game, but not poor by any means.

New pinball enthusiasts generally are let down by the game, as they think it is some "holy grail of pinball" which it is NOT. This is the not the "elusive white whale of Moby Dick". On the other hand, a lot of other enthusiasts $#@! on the game because they cannot afford one out of complete envy, which is completely pintarded and not a impartial analysis either. It is a GOOD ORIGINAL game, otherwise why the hell would it have been reproduced in 2004 (and shipped in 2006)? There was no shortage of people in 2003 wanting to buy the game either when the consideration of remaking the game was discussed.

This was not some type of fluke or means to generate addition income like MMr through PPS.
It was a Gene Cunningham dream that came to reality through a long and arduous process, that has a great story and history. It was not because "spare parts were just laying around" either.
MANY people were involved to make it happen and most do not understand or were not around to know.
Most of the remake parts had to be remanufactured, ultimately at a loss.

Overall, a solid effort with a colorful playfield, unique theme, and above average playfield shots. The DMD animations and sound calls are the true standouts of the game, not the "tube dancer".

If you like this game, but cannot afford it, go buy a Pinball Magic. It is just as good, and 3x the quality of Theatre of Magic.

However, anybody that says this game is worth $20k based on "bang for the buck" or a "perfect 10" should be locked up and have their head examined. These same people probably snort a lot of cocaine.

xTheBlackKnightx edited previous rating on May 01, 2016.

There is one at the pinball museum in asbury park NJ that I can play for the 15$ admission fee. Pretty cool game with some interesting toys in it. Check it out if you can find it.
8.976/10
5 years ago
???

I had a chance to play one game and it has been enough to think that is a very good game
I love The adult theme ( it makes me think to manga of Cobra in some ways)
I love The artwork
I love the Great toys
I love the ramp
I love the captive ball game
Ruleset is in average
It's really a pity that so few machines were produced
My main complain is there is no Wizard mode.

This game is pretty cool, but it's not as cool as it is unless you're in the exclusive club of owners. And it's not a classic Bally / Williams / Midway so it just doesn't feel as solid.

Fun game, but the call outs get annoying and monotonous.
Next1234
There are 80 ratings (that include a comment) on this game. Currently showing results page 1 of 4.