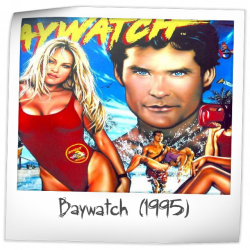 There are 86 ratings (that include a comment) on this game.
Currently showing results page 4 of 4.

I absolutely love this game. The theme fits well with me and my family and who does not like to stare at Pamela Anderson? This game is extremely challenging yet also rewarding if you can nail some of the video modes and multiballs. There are a lot of various modes to try and reach and fun factor is enduring. I think that this machine is way underrated because it is a Sega. If you were to slap a Bally or WIlliams tag to it, then it would be way up there IMHO.

Heard a lot of bad things, but really enjoyed playing it. Makes use of the extra large DMD with great animations. Biggest detractor is David Hasselhoff's big mug smrking at you. The playfield is great with a lot of shots and a really good flow. Not complicated, but lots of fun.

louknees edited previous rating on July 20, 2012.
louknees has owned this game in the past.

Great game. So many ramps to shoot for. Some ramps are easy to hit and add to a good flow for the game and some are more difficult. Back glass isn't the best but the beach theme plays well throughout the game. Makes you feel like you are at the beach and hearing the whistle blow adds to that affect. Large lifeguard tower serves two purposes. One is to allow the ball to pass up through the tower and go down a ramp, or if ball lock is lit, a secret hidden trap door opens in the tower which sends the ball under the playfield in a hidden trough which returns the ball back to the outhole. There is a second upper shooter which allows you to attempt some of the skill shots and locks the ball for some modes for 10 seconds. Nice Baywatch yellow topper for the head.

Multi ball is fantastic with this game as it gives you 5 balls at once. Thats right 5 balls. Things get pretty crazy during multi ball and your heart really starts to race when you lock that 3rd ball. All balls are auto launched onto the field which only adds to the madness.

Many different modes to play and things to shoot for. Several different video mode games. There is a laser kick ball saver on the left outlane so even people new to pinball can have a lengthy game and feel like they accomplished something after playing. Huge DMD is also nice. Sound is great as well. They actually got the Hoff's voice for the game so he barks out commands throughout the game which adds a nice touch.

Only downsides for me is the backglass artwork. Pamela is obviously not the same one from the show and I am not sure about the others. Looks kinda cartoonish. Also as the game features women in bikini's and thongs on the side, this game may not be suitable for some young children. There is an option to turn off some of the skin that gets displayed on the DMD but you can't turn off the skin on the cabinet and backglass. One final downside is because of all the ramps, it is a pain to shop this game. Removing everything from the field takes several hours and it takes even longer to put it all back together.

All in all I feel as if this game has a very high replay value and has many shots and ramps to keep players interested. The wire form ramps are endless and it takes awhile to figure out where they all go, but that kinda adds to the mystic of the game. Multi ball is 5 ball crazed action. Lots of different modes and shots to make. Awesome functioning life guard tower. Sounds from the show and the hoff are there. Theme music from the show is also there and sounds great. Artwork is somewhat racy and may not be suitable for children. Many people don't like Baywatch because it's a Sega or because of the Licensing, however if you give this game a chance you will be very surprised and more than likely hooked.

Probably one of the better sega games for me, some nice shots and ramps and a decent flow. Not sure about the lastability of the game, but one I would own for the right price.
8.816/10
8 years ago
CMM

I very much enjoy this game, tons to do and laid out very well. This is a keeper, and for the price deserves a serious look regardless of how stupid the theme is. Reminds me very much of the DMD Williams games, excellent habitrails. I have owned quite a few sega/data east games and this is one of the best.
8.420/10
8 years ago
SAM

Got some quality game time on this pin and you know what i think......WHY RANKED SO LOW??? am i missing something here?? Fantastic range of modes,nice shot layout and some cool dot matrix modes,love the chopper scene rescuing the swimmers!
Classic and yeah a tad cheesy music but hey it suits and takes you right back there :)
Dont walk past this machine if you get the chance to play...you might even end up liking,maybee even alot like me!

I'm not a big fan of DMD games generally, but this games keeps me coming back for more... the right flipper has to be pretty strong though to make the lock, so if this isn't at it's best, it can be frustrating. Nice to have a game with not much aggression and some dolphin sounds :)

Cheesy and fun
mini shark flipper sticks out and boobs

Nice game at a good price, well worth a look!

Have played many machines but baywatch is a fast table to play. Take away the baywatch theme and you still have a fun table, the sound is crisp and the challenges are at sometimes impossible but thats what I like about it. The dot matrix is excellent showing characters from the show to mini games (but can be expensive to replace) I own a baywatch machine and yes I play all the time but it's my friends and family that also wanting to come round and play all the time that makes me see that I have made an excellent choice of table.

Previous1234
There are 86 ratings (that include a comment) on this game. Currently showing results page 4 of 4.