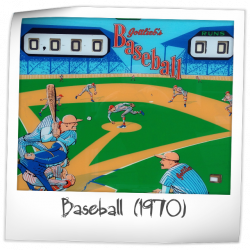 Baseball is a fun game! Short flippers, but a good simple game to play. Vari-targets are the best part of this game and satisfying to hit.

I ended up with the Add-A-Ball - Batter Up, so this got replaced then. Both fun games, but still prefer the AAB version.
6.918/10
3 years ago
CAH

The run feature is cool as is the animation of the runners on the backglass. The mini flippers though - tough to get use to!
8.348/10
3 years ago
PTR

This is the replay version of batter up, which is the add a ball version from the same year. How baseball is ranked 192 and batter up is ranked 28 at this time is beyond me.

The 2 inch flippers don’t bother me but instead add to the challenge of the game. Slope it up to near 6 degrees, buy those “extra hot” solenoids for the flippers (Marcos has them) and have a blast! With the high slope the ball drain down the outlines happens way less often. The ball also moves incredibly fast, adding to the challenge of hitting a home run on the plungers with just 2 inch flippers. I really feel like I earned it when I hit a home run on those plungers.

I mostly go for runs but if you have a man on 2nd and 3rd the pops light up for 100 points so I usually switch to go for those.

Even the shooter can be a skill shot if all you need is one more base to light.

Love the backglass that lights up to show runners on base!

Really unique game with the two plunger shots and the concept of loading the bases/scoring runs like a real baseball game!

Big fan of this game. Set it up so the playfield has a nice slope to it and it plays great. Focus on the runs scoring and competing against another player makes it even better. (Even though its not a 2 player but its easy to remember runs scored. I love the backglass lighting up to show runners on base and the plunger shots are very satisfying. Truly an underrated game from Gottlieb's glory years. Great sound as well for this period of EM as you have 3 distinct chimes, a bell for runs scored, and a great knocker for extra balls/replay(Depending on which version). My only complaint is a rather bland cabinet art choice. Christmas colors and arrows? Meh. The playability of this machine as well as the neat backglass animation more than makes up for it though!

After I had a few pins of my own, I picked up a nice Baseball for my mother who is a pin fan as well as a big baseball (Yankees) fan. She hadn't played a pin in years and really enjoys the game and the fact that it gives visitors something to do while over.

This isn't my favorite EM but it is fun. First off there are two ways to play, for score or for runs. We usually focus on runs while playing one after another. What you want to do is get the bases loaded and the bumpers lit so you can get some good scoring at the top of the field. What we end up doing is trying to slam the 2 vari-targets to clear the bases and more often than not having the ball bounce back through the tiny flippers.

Added feature which I hadn't seen before is the interactive backglass, which mimics the players on the bases of the playfield. Really a neat feature and allows people casually observing to see something happening in the game.

Simple but fun, great competitive game when you have a few people over to see how many runs you can score before game over.

I enjoy getting runs with this pin

With 2 Vari-Targets, 4 Stand Up targets, and 4 Star Rollovers, there is a lot to aim at. Those 2 inch flippers do help to make this pin challenging. There are the lit animations in the backglass. This is also the first American pin with the Star Rollovers. The 2 different ways to win replays, with scoring and home runs.

The art work could have been better, even for 1970. If you get a chance at playing one go ahead. I do not think that this game would be a good choice in a single game collection. Unless you love baseball.
3.201/10
8 years ago
DAN

Scoring Is out of whack. I played this in a tourny setting and we all ending up trying to drain the outlanes since it was worth 500 points (which is a lot). Don't know if the flippers are always weak on this one but made for some very tough play. Themed poorly, but considering how poor the gameplay is the theming may be the best thing in the game.

Dual scoring is slightly unique, but balls usually last under 15 seconds so scoring is more luck than anything else.

The artwork on this one is fairly uninspiring. On the poor side actually. However the game itself is fun and trying to get points and home runs is quite addictive. I could play this a lot but the look of the game just kills it so wouldn't buy it.
7.861/10
9 years ago
ZUL

Baseball is an interesting game with dual scoring for the points during the game as well as runs. Two ways to play the same pinball game from 1970? Cool!

The Pros:
A well laid out PF that lets you load the bases from the top lanes as well as using the rollovers on the main pf. Dual vari-targets require precise aim at all times. Lighting the pf features and then getting the ball to the top of the PF in the pops yields lots of points. The art package is simple and nostalgic. Art Stieinholm did a great job with this table.

The Cons:
Eeeeety Beeeeety Fleeeepers NEED to be tight snappy and at FULL POWER for this game to operate as it should. Consider more powerful coils? Make sure your vari- targets are smooth and responsive. The biggest feature of this game needs to be taken care of or the game falls flat in no time.

The Takeaway:
Load up your bases and knock it out of the vari-park! Pinball games really are like children. Give your deck the love it deserves and you will have a great pinball game on your hands.
4.968/10
10 years ago
CJ

I owned this machine fir about 3 months, as a kid I never liked 2â€ flippers, as it turns out I still don't. It was my first EM.
1
There are 13 ratings (that include a comment) on this game. Currently showing results page 1 of 1.