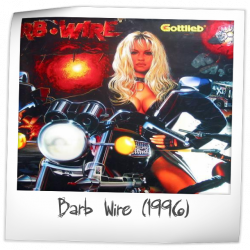 There are 16 ratings (that include a comment) on this game.
Currently showing results page 1 of 1.

If you're into the System 3 games, this one isn't so bad. I mean, they're all gimmicky as hell. It's better than a lot of the other System 3 games. At least Barb Wire has a hot theme, some killer sound and plays pretty fast and furious. The multiball modes are fun and plentiful, and theme and artwork are well executed. I didn't really know where to give this one low marks, except for maybe the rules took me about ten games to understand. I recently played this in an arcade that had nine other machines, and I probably went back and played Barb Wire the most. I'm also in the minority of those who don't think the movie is bad, either. Pam Anderson is cool in it, and at least you know what to expect!
7.952/10
1 year ago
BRB

Spend some time with this title and you will find that there's a good amount of depth and fun to it. I've played about 200 games on it in 4 days and I am loving it. The Haywire mode is intense. Overall the game is challenging and I am a fan of Jon Norris designs. Personally I like the art and theme. Sexy, definately not cartoonish or goofy. Extensive use of oranges and red on black always looks good. Being Gottliebs last game and low production adds to the appeal. Affordable in the DMD realm. Feels and appears to be very well built.

funner then its rating suggests . a little repetitive but bonus rounds and multiballs are cool and rules a fairley deep once you get them all and makes for fun play. HAYWIRE round is really cool.

quasiflannel has owned this game in the past.

Have had this game for about a month and at this point have given it enough play time to review. I have to say that this game is severely underrated. Gottlieb gets a bad wrap for many of their system 3 games but this machine is a ton of fun. Scoring can be a bit lopsided but if players know the rules its balanced enough to be competitive. Lots of fun shots. The third flipper really adds to the layout. The modes are fun. The music is cheesy but works for the theme. Callouts are good. With LEDs, the playfield, toys and ramps really pop. Reliability wise, the system 3s are fantastic. If you can pick one up, I'd highly recommend it!

This is a better game than I expected. I haven't gotten enough plays on it to really determine how good it actually is, but but first impressions were favorable.
6.676/10
3 years ago
TDX

OK, the graphics of the backglass with Pamela and those of the cabinet are nice. But I think the game is not that interesting and we get tired of it quickly. Luckily the music part is very good!
7.852/10
4 years ago
JAR

Really enjoy this game. Fun ramps, interesting, if not overly simple, skill shot with Big Fatso mech toy (who is also a good antagonist with entertaining call outs). Enjoyed the movie as well as a B-movie, dystopian sci-fi and Gottlieb did a good job of correlating the movie to the pinball themes. Colors and playfield look very nice, particularly with LEDs, which help light up the very dark back of the pf.

Artwork is top notch. Pam is always easy on the eyes from that Era. Movie wasn't good but Gottlieb did a great job on converting to a game. Game play is great and it's beautiful to look at to boot.

Personally, I think this is the best System 3 game out there. Art package is dead on. Great rendering of Pam and the side art is probably some of the best you will find for the era.

I also think this has the best flow of system 3's. No stop and go that SF2 or Tee'd off has. Layout and gameplay pair nicely. Rules are deeper than some system 3's and take a few plays to get used to. While the scoring can be unbalanced, nowhere near the chaos of a Gladiators.

DMD is pretty damn good for system 3's as well. Rescue 911 and SF2 are damn near terrible.

Sound is great. Pam has some nice callouts...but the music could use a bit more variation.

Ramps are smooth...playfield art is good...backglass is unreal...given some better rules I think this game would get alot more love.

The skill shot is an actual "shot". Not a simple plunge and roll over something that is blinking. I like the "LENS"...again, there are several shots on this board and many things to do...not boring at all.

If you see one on location (good luck), drop a few quarters in....Only 1,000 produced and I am sure much less are in circulation.

I really wanted to hate this game. It's so ugly, so cheap looking, and based off a terrible franchise. Yet, this pin is in fact quite fun. The skill shot is really good, there's some super cool toys, and the shots feel good overall! Yes the artwork is terrible (still a step above some of the newer Stern Photoshop copy and paste pins) and yes the callouts get quite old, but the gameplay is really good. Decent pin if found for the right price. Between this and Baywatch, Pam seems to make for good pinball.
8.296/10
6 years ago
KID

I love this game. It's very simple to get into, and it has a nice pace too. Art package is pretty good, and Pam isn't too hard on the eyes. Shots are usually easy to make, and 4 ball multiball is a blast. My only major complaint with this game is that there is no video modes for the DMD.

Terrible movie, but the pin is a blast.

OK, Pamela is sexy... Backglass is cool. PF artwork is bad. Rules are even worse, with unbalanced scoring. The right ramp seems clunky. The skill shot is boring after a while.

Overall, fun to try for a few games, but ages very fast.

Underrated pin for sure. I Don't hate sys 3, Ruleset is not super deep, but it has some really great long shots that are hard to make everytime. Theme is not strong, but cool in the right setting, I love the flow of this table.

One of the better looking Gottliebs out there. Gameplay is average. Still has that clunky Gottlieb feel where the ball bounces around in the ramps instead of flowing up them. Sounds and dots are just as cheesy as the movie.
8.888/10
8 years ago
???

interesting and fun pin to play .. not too many produced ,alot of fun and any pin with pam is great for man cave !!!

accetta has owned this game in the past.

Not that great, but not unplayable, excellent backglass.
1
There are 16 ratings (that include a comment) on this game. Currently showing results page 1 of 1.