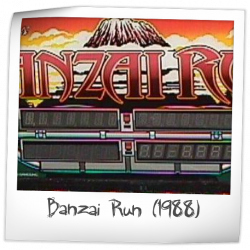 There are 89 ratings (that include a comment) on this game.
Currently showing results page 1 of 4.

this is definitely one of those games you need to play at least once. the theme is absolutely solid and getting up to the backbox is fun, playing the game is fun and making the shots is easy. there's really not too much too this game but there's something to be said for simple mechanics executed very well. getting to the backbox really feels like the main goal of the game and playing pinball vertically definitely gives some variety to this game. overall I had so much fun playing this game and hope I can find one again to sink my quarters into.
8.200/10
5 months ago
JLB

I’ve never played a game that shows you so many lights, flashers and music when you have reached a milestone or a win and it goes on for awhile! If your playing this game in a arcade and you win every one around you will know. What’s not to like with two play fields , but be warned it’s tough to maintain because of it.

Best part is playing the backglass. Great game and I think will always be.

Such a unique game with the play in backbox, lots of fun but does not have that much variety to it in the end
9.109/10
10 months ago
WAB

Favorite game. Yes it’s limited in depth, but what it does in the shallows is an epic rip tide into a fabulous choral reef.

Music is timeless, call outs are memorable. The backglass does the clever digits tied into the artwork, and there’s a less is more aspect with more playfield, less art. Plastics are awesome.

Of course adding a left ramp, a drop target bank, another mode for each playfield, and a way to activate “freestyle” more often (maybe a ball save chance feature if you drain quickly) would improve the variety in gameplay. But in the context of how tough the manufacturing was and a first time designer it’s understandable how simple the game was to balance the vertical ambition.

If Banzai Run and Blackwater 100 had a baby, it might have been the ultimate demonstration of pushing the envelope in the pinball art form.

FlySlyde has this game on the wishlist.

This is certainly a memorable game because of the playfield in the backbox. I always thought it was really cool how it actually pulls the pinball from the lower playfield to the upper one with a magnet, rather than just firing a new ball out on the upper playfield. The rules are simple to understand which is nice, and makes the game feel like you're always a little big away from the next goal. The backbox game gets a little stale and the playfield is a little bare but the game remains fun.
9.568/10
10 months ago
TTB

This game kicks so much rear end. It's so validating to challenge an "opponent" and then get that ball into the Banzai trap off the right flipper (or backhanded off the left) and then to play the upper playfield. The more one plays the upper playfield, the more they get the hang of the timing of the shots. Good results on the upper playfield can be easily repeated with practice.
9.792/10
12 months ago
KDL

Such a unique and amazing game should be rated higher but there are not many of these out there for people to play.

This really unique game is great fun. I restored 2 of them for a client and was really tempted to buy one. Great system 11 game.

ehex9 has this game on the wishlist.

Quite the unique machine. I felt the ball drains too quickly on the back box.
7.773/10
2 years ago
ECW

Fun game. Novel idea. Vertical board on backglass is both cool and hard. Then put in pretty pointless (from what I could see) and the game loses its mojo after that.

Such a quirky design...how could you not love it? System 11, motorcycles, and more pinball!!

These have climbed greatly in price, so it is tough to pull the trigger on one unless you like the rarer/oddball stuff.

Once you figure out what to do this game is so much more fun than just trying to get into the upper backboard area
8.223/10
3 years ago
SHO

A very unique pinball, challenging but as others noted not as much replayability as you would think.
6.376/10
3 years ago
ADM

I realize that this is a unique game due to the vertical playfield section, but I really didn't enjoy this game. I felt fairly bored with it after just moments, and that's not normal for me. I wasn't feeling the flow of the shots, and none of the shots in particular felt all that good to hit. I'll give it another go if I come across another and maybe it'll grow on me.
9.726/10
3 years ago
SMT

To me, this game belongs firmly on the list of top 15 pinball machines ever made. 30 years have passed and very few games have met or surpassed the ingenuity and creativity that went in to this game, despite numerous major technological advancements. If it wasn’t for start ups like JJP, I think it’s safe to say we never would have seen pinball machines start to push the envelope again in terms of what is possible. The original theme, the awesome music, the difficult and unique sequence required to become the King Of The Hill; It is the perfect blend of everything. You can pick up on the objectives of the game easily and intuitively without reading a novel of rulesets. This was the first game I hunted down for my personal collection, and it will never leave!

Banzai Run is a the most unique designed game other than Pinball Circus. The game plays super fast if dialed in, especially if you are lucky enough to have one with upper and lower xR7 playfields. The challenge of defeating racers, getting laps and heading up the Banzai Hill makes each game memorable. Everytime I hit start, I know I am playing something special. It stands out in any collection and shows how Mr. Lawlor, even on his first attempt, pushed the limits of pinball forward. Innovation, beyond measure, a true motocross race under glass, start to finish. In my opinion, when locked in, this game holds it's own against the legendary wpc titles. In fact, I am starting to believe this may be the best game we have. Cannot believe it is ranked so low in top 100. More people need to play this gem!

Unique gameplay, fun to play . The extra play in the backglass is memorable, and fun.
Dirtbike race theme is cool.
8.537/10
3 years ago
BAD

Gets repetitive
Not much staying power

Favorite pinball machine out there. No comparison!

FLASHBALL has this game on the wishlist.

The back glass is tough and unique. I like the dirt bike theme but like a video game I also like (enduro racer) it doesn't seem like many were made or around. I would still buy this pin if priced right.

stavio has this game on the wishlist.

Ah, yes, the most unique pinball machine between Black Hole and Safecracker. From a collector's standpoint, if you were making a museum of pinball, this would be on the must-have list. The vertical pinball takes the mechanical back box animation to its ultimate logical finale, a call out to both pachinko and bagatelle, and is tons of fun. The major flaw of the whole design is the rules and scoring and playfield challenges aren't balanced. Jackpots are incredibly hard, relative to payoff, and the lower playfield (ahem, main playfield) is simple. While I always dig the originality of Lawlor's theming, and the dirt bike maze is well thought-out, I still think that somehow if there had been a different thematic hook to this machine other than another racing game it would have had more staying power. It's a player's machine in that it's not particularly easy to master, but not in the sense that it rewards a balance of skills, and it takes a lot of plays consecutively to get into the game successfully.

I think the analog to this machine isn't, say, No Fear or even Safecracker or Haunted House, but Hercules -- a novelty machine so wonderously weird you really have to put it on your checklist of machines to play, but not one you're likely to pine for when you haven't played it a while. A bucket list machine, not an obsession.

So I’m not sure if I’ll ever buy the game, as there’s not enough variation in modes and objectives but this game is fun to play. The top playfield is challenging at first, but quickly gets easy. Still always satisfying to make a cliff jump. Fun to beat racers and move up in the standings. I’d have to play this game a lot to get better at it. It’s good, but not great.

Natemsmith04 has this game on the wishlist.

Cant get into the gimmick
Next1234
There are 89 ratings (that include a comment) on this game. Currently showing results page 1 of 4.