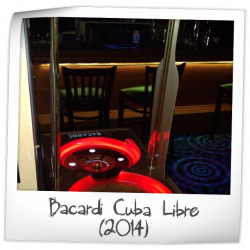 Eight balls per player. Gobble holes (6), Trap holes (2). "Figure 8" playfield layout. One brass-trimmed cup holder for each player. Overhead marquee supported by metal tubes upon which foam board images of rum bottles are attached. Curved openings on each side of the solid oak cabinet allow game to be carried by two people. Legs detach for shipping.

This is a coinless and flipperless head-to-head game where two players at opposite ends of the playfield compete in simultaneous play. No coins needed to operate. The players manually retrieve the balls from trays in the side of the cabinet. Each player drops the balls, one-at-a-time, through a hole in the playfield to place them in front of the ball shooter. The object is to deliver the ball to the opponent's side of the playfield into the center ring (actually a circular trap hole with a bell). The first player to do this five times is supposed to shout "Cuba Libre!" to be the winner. Levers on one side of the cabinet allow the trapped balls to be delivered to the trays for the next game. The other side of the cabinet has an opening for the battery pack and power supply. The 12v lithium ion battery pack operates only the illumination as all moving parts of this game require no electricity, allowing the game to fully operate when the battery pack has been removed for overnight recharging.

We have seen this game for sale in the Pinside Market once. The asking price was $1,500 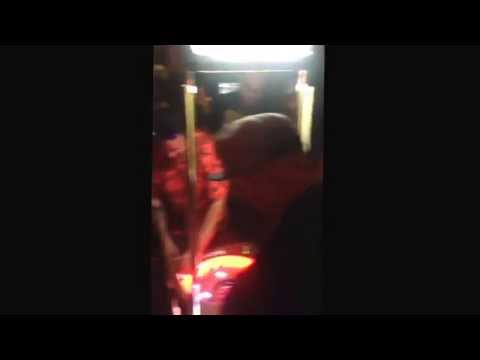