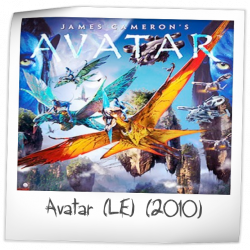 The Limited Edition of Avatar model has a number of enhancements over the regular version:

The amp suit model which just falls down and lifts back up in the Pro model, has animated legs which march up and down.

The transporter pod we said should have been motorised gets the motor it needs to enable the lid to open and close.

A shaker motor is included in the game.

There are more models of the characters including a banshee over the ramp, Colonel Quaritch in his amp suit - another feature we said should have been included - and Na'vi people over the N-A-V-I targets.

We noted the number of unused lamps on the lamp matrix. Well, these have been used to add more controlled lighting which sits alongside more general illumination lamps.

There's a return to a metal bottom arch which has backlighting for new translucent blue windows.

Metal playfield slide rails are also fitted in place of the pegs used on newer models.

The original-style lock bar and latch mechanism make a comeback.

A white powerball in included in place of one of the steel balls, along with a sensor which increases scoring when the special ball is in play.

New game rules and software is added to operate the new playfield devices and features.

Chrome side rails, lock bar and hinges are installed.

In addition, playfields for machines 1-25 will be signed, while all Limited Edition playfields will have an additional hard coat applied. All 250 will also be individually numbered and include a special plaque and certificate of authenticity.

This game has received 84 approved Pinsider ratings and currently has a rating of 7.712 out of 10.

This game ranks 1st in the game group "Avatar". The group itself ranks #131 in the Pinside Pinball Top 100.

72 Pinsiders have this game in their collections.

87 Pinsiders have this game on their wishlist.

We have seen this game for sale in the Pinside Market 58 times. The median asking price is $6,500

There are 281 forum topics linked to this game,