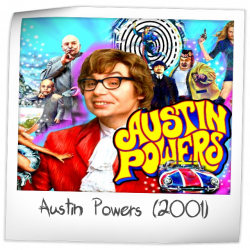 There are 53 ratings (that include a comment) on this game.
Currently showing results page 1 of 3.

Not terrible, but certainly below average and a wasted opportunity by Stern. I love Austin Powers, but this machine feels cheap and clunky.

theadicts77 has owned this game in the past.

This game is fairly representative of the Austin Powers movie, decent but nothing to write home about. It was enjoyable, but I wouldn't go out of my way to continue to play it if it were on location near me.
8.840/10
1 year ago
???

Groovy Baby! Bought this game brand new and it will always remain in our collection! Very happy with the recent addition of color dmd screen. This game has a simple theme that makes it fun to play over and over again. Fun for players of all ages and skill levels!

Felt I needed to give this one some love cause it's such a peed on title, but I dig it, baby. I get it if you didn't like the movies but this is a fun and underrated pin. Very good bang for buck here.

Truly a terrible game. Even if you're an Austin Powers fan, this game is sure to annoy you before the end of your first play. The sound and music are repetitive and of poor quality. The layout is a very standard fan layout, but the rules are so basic that it all just ends up being a huge snooze fest. The toilet shot is unreliable as clean shots often just fall off the side rather than hit home. The Mini Me spinner is too heavy to get good spins going. There are just a lot of bad and uninspired ideas on this game.

The layout was partially recycled for Iron Man, but on Iron Man the rules get a massive upgrade and the shots are SO MUCH better. Night and day difference between the games.

I give Austin Powers a hard pass.

If you love Austin Powers, you'll love this pin ... if you don't, you won't. It's that simple.

We call this game "Sexy Iron Man" in my neck of the woods due to the Borg design. If you see one play it and don't take it to seriously. Fun and quick game play, it kills titans in our tourneys.
7.968/10
2 years ago
MAN

This is a fun game to play. A lot of good shots and modes with a decent set of rules. Some very cool gimmicks as well. A very well designed machine with good integration into the theme.
7.896/10
2 years ago
LEW

Disclaimer: I love Austin Powers - the theme never gets old for me. Game is great and very hard to find in good condition - no NOS or re-made plastics out there. Not much modding unless you do that on your own. Mine will never leave. I like the shots, it is a little on the easy side but the goals are defined and getting to Virtucon is very satisfying.

This one is all over the place. The cabinet artwork is tremendous - The backglass is hacked together in Photoshop - Music and sounds are terrific - Playfield is an utter disaster - The original material which the table designers had to work with was bursting with inspiration -
sad to say, not a bit of that comes thru in the game.

I've been searching for this table to play in person for quite awhile, and finally had the chance this weekend, while having lunch at a roadhouse in south Washington. I was excited when I first saw the table, it was the first one I dropped quarters in. Within about 6 minutes I felt like I was missing something about this table. Tried three more attempts and walked away with "this has to be the most boring-vanilla table I'd ever freakin' played."

Two nights later I went back to the same roadhouse for dinner with the family in tow. One more chance. Shots weren't a challenge. The great sound effects couldn't hold my interest since the game didn't have a good flow. My 11 year old daughter, who loves pinball, had a similar response. Kinda' boring and who's Austin Powers.

Not a fun game and doesn't do the films justice. Disappointing.

This was my first machine. If you like the theme you will love the pin. If Austin Powers isn't your thing you will likely find the music and call outs a bit annoying.

ubpin has owned this game in the past.

This is a solid game that has great humour. A great game for beginners and fans of the movie. Nice feel to the playfield and a few nice rewarding shots. This game is great for parties and is a lot of fun for everyone.
8.172/10
3 years ago
FBA

This game is loads of fun to play and quite hilarious..Don't know why it gets a bad rating..Speech and toys make this game a true keeper..It always makes me laugh..Very enjoyable

Never had a chance to put any time on this machine before. I came into playing this with zero expectations or notions.
I fell in love with it!!!
Started off with cpu code 1.02. Had a few games on it. It was good. Upgraded to 3.02. WOW What a difference!!!! Smoother feeling. callouts and music really make it awesome!!
I have twenty machines . Not everything I fall in love with. Challenging. I want to play it over and over.
6.902/10
3 years ago
MAH

I owned this game I love the theme and I think it gets a bad rap overall but some of it is justified. The game can get a bit repetitive and I knew when I bought it I would like sell it later on. I love the Fat Bastard multi ball I love the color changing LED bulbs I put in. This game can pop with bright LED's.
It is a game I describe as a quick pinball game good for a quick game but nothing like deeper games where you can play longer. It's good just not great.

I only played a handful of times, but enjoyed the overall game and it has one of the best sound tracks. Themed perfectly on the movie. Was a fun and interesting game. One I home to own at some time.
3.169/10
4 years ago
DEF

Having a toilet on the playfield is a curse. I hate South Park. I hate Junkyard. And I hate Austin Powers. I actually thought "This game looks kind of like AFM" when I first walked up to it. It *should* be a cool theme, but everything about it is a letdown. It's ugly, the shoot-this-X-times for everything code is super boring, and the Fat Bastard multiball jackpot callout haunts my memory forever.

My first pinball game. Bought 4 years ago, and play it every week!!

Morhaus edited previous rating on September 28, 2019.
Morhaus has owned this game in the past.

wen i seen this game i thought for sure it would b fun, i was wroooongg ... i have played on location about 10 games on two machines it didnt have any flow ,it played slow,didnt like the ramps, seemed repetitive fast...maybe i need to play one in a home setting ? ... i like this title better than w.p.t but still i jus couldnt dig it...
7.450/10
4 years ago
SEB

Under rated game. When one came up for sale locally I jumped on it. Enjoyed the game and sold to a friend when we needed room. Some call it the poor mans Medieval Madness. I agree. AP gets a lot of play at my friends house. Don't listen to the people giving it a bad wrap. Spend some time on the game.

Next123
There are 53 ratings (that include a comment) on this game. Currently showing results page 1 of 3.