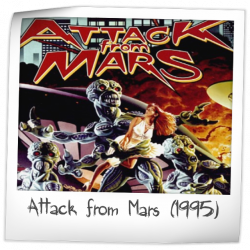 This game ranks 2nd in the game group "Attack from Mars". The group itself ranks #3 in the Pinside Pinball Top 100.

There are 574 ratings (that include a comment) on this game.
Currently showing results page 1 of 23.

Its simple, yet deep. Some shots could become repetitive.. but thats on you.

Definitely a worthy game of its rating.

It's ok. Used to own it and traded.

Danman has owned this game in the past.

This is a fun game.

The playfield layout is fairly basic which leads to some of the shots feeling less rewarding than they should. This prevents the game from being a favorite of mine.

However, outside of that, they hit everything else out of the park. The rules are simple to understand but hard to beat. The art package is like a throwback to a great generation of cinema. The sound design is on point.

If this game had a more enjoyable playfield, it would be a perfect title.
8.796/10
4 months ago
MTF

My favorite classic for sure Easy and fun to play. Great game to introduce others to pinball. Absolutely love the remakes.
9.360/10
4 months ago
CLG

Other than the launch ball button, this is an amazing game, its deceptively simple, some of the shots are immensely satisfying and once you start playing its hard to stop. Great pin for sure.

JasonTheBest edited previous rating on February 06, 2020.
JasonTheBest has this game on the wishlist.

MasterReese edited previous rating on May 03, 2020.

My pick for the best game of the modern era and I'm surprised the production run wasn't higher. The art isn't spectacular but it's fine, and just having the hilarious rubber aliens on the playfield makes up for how the game doesn't jump out and capture a casual viewer right away. The saucer is just outstanding.

I can't think of anything else that hasn't been covered already. The color DMDs are nice but it's fine without them. Too bad the prices on these are waaay high but there's a reason for that.

A blast for everyone - noobs, vets, kids, adults (with the caveat that, in general, pinball is a game for grownups, and too difficult for younger kiddos).

*Wife approval* "Oh, that looks fun." And as of this writing she's played it maybe once or twice, if that. No interest at all. Oh well, sometimes, it's just like what are you going to do.
9.900/10
5 months ago
CRC

The best game ever made in my opinion. Perfect shots, lots of flow, hilarious humor, great call outs. How can you not love it????

Having heard soo-oo much about AFM, I couldn't understand the hype, as on screen etc, it doesn't look that impressive or exciting.
However...if you fortunate to stumble on one (or have a friend who has one) PLAY IT!

The story of defending the earth is an old one, but it plays out very well here. The rules are straightforward, the shots can be long or mid or short, and the satisfaction of destroying the alien ship is amazing.
Don't be putt off by lack of toys or ramps etc.
This is pinball done VERY WELL.
Less is more!
9.296/10
6 months ago
???

The feeling of blowing the saucer up for the first time is one to remember. Love how the machine vibrates and makes you feel like it’s actually happening.

Jmckune has this game on the wishlist.

Many people compare this favorably to medieval madness and i can see the logic where rules come into play. The similarities are definitely there. Especially in the realm of humorous speech which definitely adds to the game. But where as I love MM, I'm not much of a fan of AFM. Part of this I attribute to MM simply being a better version and better theme. Part I attribute to the colorful but ugly playfield on AFM. But the largest attribution for my dislike is that this game is possibly the worst of all points inflaters. In most games a billion point game is well out of reach or at minimum difficult to reach. Here, with Attack From Mars, a billion point game is easily achievable with a mediocre player putting out a mediocre game. Especially when I used to write all of my scores down, dashing of a nine or ten digit finale was a real pain in the ass. There's something silly about points inflation in pinball. You'd think the industry as a whole would strive towards a standard which would make cross comparison a little easier, but no. I'm grateful to Jersey Jack and their efforts to drag point tallies back down to earth.

Great game overall but, in my opinion, a bit overrated. But still fun to play, good theme and a great bash-toy.
But the artwork is awful.
And even if the music is good, it´s kinda repetitive.
But good game overall, but a lot of AFMs on location or in tournaments play very crappy. But if it´s playing good, great and fun to play.
8.340/10
9 months ago
GPD

I enjoyed playing this game and didn’t know anything about the theme beforehand. It seems it would be repetitive at first, but then it grew on me. Loved the aliens. Toys are fantastic. Lights are great and the game draws you in. I’d consider owning one in the future. I’m not a big alien theme fan in general, but this game doesn’t take itself seriously and I liked it.
10.000/10
9 months ago
DDR

For my money, this game is consistently overrated. It's cool and all, just not top 5 all time cool.

This game always just feels like MM to me, but I do really like playing it when I see one. I think the reason people like it so much is that it's straightforward and the theme is just a classic. Destroying the saucer and the martian attack are always pretty entertaining, but destroying the saucer over and over gets repetitive (hence my MM connection).
9.332/10
11 months ago
TEZ

All my reviews are going to follow a simple formula for those reading.
Number of shots to make - Pro's - Con's - Must Have Mods - What To Look For When Buying

Number of shots - 7 Above Average

Pro's:
* All the shots are fun! The saucer destroyed one in particular
* Anyone can walk up to the machine, play it and feel they have achieved something with the Saucer shots
* Lastability - this is not easy to complete
* Well thought out Martian Attack mode with a seperate high score attached to it
* Only machine with an Epilepsy warning - Strobe Multiball is a great idea though

Cons:
* The fan layout here is somewhat basic
* Bashing the saucer over and over can be enough to get a high score on its own
* Scoring is stupidly high
* Don't think the 3D translite is better than the original (even though it's a mod)

Must Have Mods: (Note I will not include things like LED's, Color DMD, Invisiglass or Speaker Upgrades unless it's really badly needed)
* Tilt Graphics Apron
* Bill Ung Saucer kit
* Some combination of side blades and backboard decal
* Decal on top of target bank
* Mezel Mods Eat at Eddy's Building

Hands down the best game ever made and beats MM by a mile. I've played this ever since it was released during my college days in the mid 90s and I still play it whenever I can. While the saucer toy is the most visual and most fun, there's still plenty of other things to do on this machine, and I still haven't reached Rule the Universe. The only thing I don't really like is the amount of red in the playfield color scheme. Someday, somehow I'm going to own one...
9.300/10
12 months ago
???

A true masterpiece, one of the best pinballs I have ever played, even my son and nephew who aren't big pinball fans loved it. I would love to own one, everything about this machine is the epitome of great pinball design. A must play.
8.579/10
1 year ago
JIN

Half-ugly, partly hideous, playfield art and a almost ridiculous theme on one hand. Some of the best game play ever I've seen in a 90's machine on the other. Fast and well thought out shots allover the playfield, entertaining ball locks and crazy multiball play.
This is in my opinion even one notch better than Medieval Madness.

Call-out and music are great and work particularly well with the DMD-animations and the, otherwise, corny and comic space attack theme.
Lastability is strong and I think that this would be one of the best choices for a small but expensive collection.
Not much more to say- a perfect pinball machine.
8.816/10
1 year ago
MOM