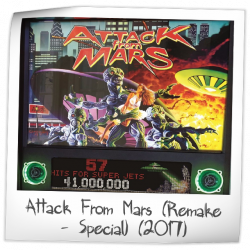 This game ranks 3rd in the game group "Attack from Mars". The group itself ranks #3 in the Pinside Pinball Top 100.

There are 54 ratings (that include a comment) on this game.
Currently showing results page 2 of 3.

Probably my favorite game. If I could have selected 11 or 12 out of 10 for fun factor, I would have. Just fun, again and again, without feeling like you need to think hard about it.

RobbyIRL5 edited previous rating on August 11, 2021.
RobbyIRL5 has owned this game in the past.

An all time classic. Not the deepest game but probably the most fun you can have in pinball. Best call outs ever.

LargemouthAss has owned this game in the past.

A big step up from the classic version, but very similar price point. I would recommend getting this version if possible.
9.740/10
1 year ago
LAW

A great update to the already amazing game! Better lights and sounds!!!

My Favorite game of all time! First time players instantly drawn to it.

The good: Very, very approachable. Quick and easy to learn rules with obvious clues to where you need to go next. Some gimme shots, but also some tougher shots that challenge better players. Who doesn't like destroying flying saucers? Cheesy, fun animations on the DMD.

The bad: Repetitive. You want to destroy the flying saucer? Great. Now do it again.

The overall: Just plain fun. If you want a pin for parties or for kids to pick up on occasionally, I'm not sure you can do better. Some challenging shots if you want to go that route, but you really don't have to. This should absolutely kill on location, especially with the non-pinhead folks.
8.343/10
2 years ago
MWT

This is a fun game, I purchased NIB Special and I do love the open play field. That said, this game is over hyped. It does not compare with the new games out today. It sure seems like Chicago Gaming company makes sure that all three of their games are 1,2 and three. I own all three of them and I like them, probably influenced by these ratings to buy all three of them. I like the games... but not as much as the people putting out these ratings.

mwthatch edited previous rating on June 11, 2020.
mwthatch has owned this game in the past.

What more is there to say about AFM that everyone else hasn't already said? For me, put up against the top games, the "simplicity" of the elements and openness of the playfield make it more diffcult and flow-y at the same time. Nothing is more satisfying than destroying a sauce... except for destroying mars. You can't go wrong with this game. It's incredibly fun.

I love this game. Its a cheesy sci fi theme and I love cheesy sci fi. It has a nice retro feel to it, and also a cheeky sense of humor. Its a bit of an homage to both the Mars Attacks cards and old science fiction movies. The monsters are obviously inspired by ERB's John Carter books with maybe a dash of Ray Harryhausen thrown in. I will start off by commenting on the art first. I must admit I like the art package of Revenge from mars a bit better. The translite looks nice, but I don't think its the greatest ever. But, again I like the look of it, and the model in the retro Marilyn Monroe dress is a nice touch. The playfield art is very basic and plain, but fits and helps expand the theme. Its also laid out in a manner that makes it super easy to chart your progress and for that I think its great. But, the art could have been a bit more detailed, but as is. It reads very well for your eyes and puts the focus on the ball in play and making your shots. The cab art is nice, but basic. Has a good amount of energy, but I hate purely text cabs. But, this one is fine and it fits... Just basic.
The toys... The spaceship is a great toy. One of the best in pinball. The use of the shaker is well done and really sucks you into the gameplay.
The martian figures while I feel could use more color, are a nice asset and make the whole martian attack modes more immersive. Really nice that they stop shaking when you hit them and kill them during the attack mode.
Now the layout... I think its a perfect layout. There are really no short shots for you to make. Some people might hate that the layout is so wide open, but I think that gives this game its charm. Its about accuracy and also strategy.
And the code compliments the layout and the toys. Really just perfect coding, and I think this game is deep... Or at least deep enough. As you have lots of different things to shoot for. You have to destroy UFO's and then mars. Along the way you can hit all the shots multiple times. Then once you've completed each of the shots you get Total Annihilation which is a fun MB. This can stack with Martian MB. And that allows you to get massive points.
To get wizard mode you need to complete all the goals which require you to destroy mars, get a 5 times combo, get a super jackpot, and achieve TA and other goals. And for me I've never gotten to the wizard mode on an physical machine, I've only gotten that far on a virtual one. Hope to one day make it there and beat it.
So again... I really like the shots and I really like the code. I think there is strategy on when to try to stack your hurry ups, and even your martian mb and your TA mb or even your main mb. I even like the roll over lanes that light your stroke of luck. You need to pay attention and make sure you're always lighting them up and completing them. That is a cool feature and it might be a little thing, but Monster bash doesn't have it, and I feel it just gives you a little reward for paying more attention and planing ahead.
Just a fun, fun game. I really enjoy playing it and hope to own one. Without a doubt its one of my favorite pins ever. I'm sure some people might find it too easy, and that might be true if you've beaten it a few times. But, I have yet to do so, and for me it will always be part of a mutli pin collection so I'm not worried about getting bored of it.
8.744/10
2 years ago
TF

I never thought I'd really be able to tell the difference, but I've played the original AFM and definitely felt it had more charm to it. That said, this version still kicks you know what, and I'm sure the remake limited edition does as well. I'd eventually love to have any of the AFM games in my collection. Fun theme and overall awesome playing experience. I don't foresee this game ever getting old if I get one (original still preferred).
9.476/10
2 years ago
ASW

Had this game for a while now, thought I might get sick of the theme or jokes, brightness level, but the answer is NO! Its all been great and keeps you coming back to it to play again. Game layout is very straight forward and challenging, you may have a quick game, but followed up by a great battle. Ive got the green one and love the topper too! Games really draws you in!
6.856/10
2 years ago
DEN

britrex1 edited previous rating on February 13, 2019.
britrex1 has this game on the wishlist.

This game is fun, smooth, fast, Funny, it checks all the boxes. Love the artwork, and the extra large screen and animations are great. For a game of this caliber, special edition is a great value because it has the big HD DMD, shaker with lit speaker panels and other little upgrades. Not sure I’d paid the extra $600 or so just to have the topper as the other next level upgrade

Maskell edited previous rating on May 12, 2019.
Maskell has owned this game in the past.

Very good pinball.
I like it but finally it is very linear shots.
I liked it, he left my home, no problem.

Was a hit, but other games were released and are today much better than this game.
9.192/10
2 years ago
ZH

Changed my mind from an old rating. The game is simple, but very addicting. I think of it more as an arcade game vs pinball. It fast and fun. This game always seems to pull you back to play more.

Simple and so much fun. A great machine.
PreviousNext123
There are 54 ratings (that include a comment) on this game. Currently showing results page 2 of 3.