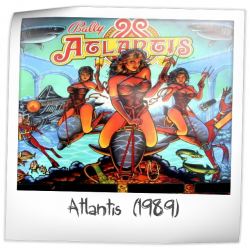 Okay, so I look at bang for your buck when I buy pins. This is a great title for the current price to pick one up. The sub multi-ball is solid, the playfield is nice...especially when you add led's. There are plenty of good shots on this table. The Back glass is so/so but I would much rather look at it than The Shadows back glass. Cab art is decent if you can find one that is not faded. Atlantis is a cool blend of Bally's and Williams system 11 games both with the lighting and sounds. If you are interested in this title please don't be influenced by the 2 reviews before mine. Those two guys are idiots. Go out and find one and play it yourself, I think you will find it very worth owning for $1200-1500 clams. By the way with only 1500ish produced it is only a matter of time before some joker lists one on ebay for $4995.

pinbender has owned this game in the past.

I was hoping to jump into the cryptomythology of Atlantis, but found out that all I was there to do was save some divers. Still, the shots were balanced and appropriately challenging and the game was fun enough. I could play Atlantis or walk away from it, so it isn't addicting, but it isn't repulsive either. However, there are better late-80's games out there - not worth a long drive or waiting in line to play.
4.812/10
3 years ago
JMS

The theme isn't bad in concept. But in application it's awful. The gameplay isn't good enough to save it either.
7.277/10
4 years ago
MAS

An eclectic mix of the old Bally and Williams. The theme and art are decent. The sounds, music and flippers would make you think you are playing a Williams system 11 game. The rules and layout, all Bally. Hit drop targets to award lit insert. Hit 1, 2 and 3 on each bank to light a lock and hit ramp for jackpot. Hitting lanes A and B increase saucer value. The layout (minus the ramp and the dropping ramp) feel like a game from the 60's/70's that is what hurts the game so much. A few unique elements with a mundane playfiled makes for a mediocre game worth of a few plays, ownership perhaps.

Interesting layout with the submarine as the ball lock. Artwork is awesome on it, even the cab has good artwork and not the generic 6803 cab.

amkoepfer has owned this game in the past.

The first thing that stands out about this game is the cringe worthy artwork. Big haired women riding Dolphins. Once you get beyond the artwork it is actually a pretty entertaining game with decent flow, lots of targets and a good layout.
Nothing I would put in my collection but at a recent pin expo I came back to this title a few times because it is fun to play.
Better rules and better art would have propelled this title far beyond its current rating.
9.091/10
4 years ago
DJB

I bought Atlantis because of the rarity and the hype placed upon it from Pinside members. They weren’t wrong. It’s a very cool theme and the artwork is fantastic! The rules are very system 11, which makes the goals easy to understand and the shots are challenging enough to give you that, one-more-game feeling. I love the controlled GI lamps that change color when you lock a ball or get multiball. My ownership of this title was very short lived, only because I basically turned it over to a good friend that has a collection the complements it more; and I still get to play it all the time!

I love the play field art, hate the back box art. Great shots and great theme though.
7.346/10
6 years ago
DAN

Fun pin with a basic but near ruleset. I like the timed drop targets, makes you focus more on them. Backglass is awesome, almost that alone makes me want to buy one.
7.822/10
6 years ago
MAU

Very decorative game and surprisingly fun to play even not to many things to do or to much dept in game play.

mau has owned this game in the past.

This game kills me. After you get a jackpot in multiball, there is nothing left to do. Same for collecting the 1 million Hurry Up from the drop targets. This game is painfully dull. Good looking game, but a better ruleset would help this game quite a bit.

BigBangBack has owned this game in the past.

On the bad side, there is that cheesy translite artwork :)

joestro78 has owned this game in the past.

Bally Atlantis is a game that should be so much more than it is.

The Pros:
A layout with lots to shoot for. The spinner is in the sweet spot for maximum rotation and the jackpot habittrail is a tough shot to hit. Lots of standups and drops keep the shooter on point. The saucer at the top of the PF reminds me of older (harry williams design) games. Diving and the red gi lights up is a cool idea similar to the space station condition green.

The Cons:
The rules blow and the game is boring. Even multiball is boring. Artwork is uninspired McMahon blather. Women with perfect hair underwater upon mounted dolphins sporting trident spearguns while they push out their chests should excite me... but these do not. What a shame. A solid PF wasted on crummy rules. Was this game even playtested? Maybe it's enough for the kiddies, but not for a player.

The Takeaway:
There is a reason why this is the only game Peter Perry only designed a single table on his own. This game is that reason. As far as I'm concerned this deck belongs where it is themed... underwater.

Update:
I'm changing my mind about this deck. I like this game a little (emphasis on "little") more than I did when I first wrote this review. This PF layout is solid. The left hand u-turn scoop/ramp for the Jackpot is a challenging shot and requires precise aim for the payoff. It is also close enough to the flippers to make it a dangerous proposition to tank on. The Million shot at the top of the PF is narrow and is also valuable for the bonus multiplier. The Mata-Hari slope-saucer requires skillful nudging to ease the ball into the hole. When multiball starts and the balls roll off of that strange black wooden boat hull... It's pretty cool.

Is this game as bad as my original review would propose, no. It's just that this kind of ruleset would be something that I would expect more of. After playing a few nice copies with pinheads who just absolutely gush about how much they love this table, I'm going to lighten up a bit and say: This is not a great game, but it is not as bad I originally thought by a long shot. This game is fun, and sometimes (alright, almost all of the time)... that's what pinball is really about.

Beautiful pin. Even without the hot chicks, I just love the comic book style of the artwork. The colors really pop out. The game play is average and not very fast. The multiball lock rules are very similar to the Getaway where you light one target each of the three target banks and then shoot the ramp then repeat for the other two balls. The submarine ball lock and release is a cool idea. The sounds are ok.

A relaxing game to play, there's a slowness to it that I like, and the artwork is great for the era (most games had very naff artwork at the time this was put out). Simple game, but very nice at the same time! Wish I'd have kept the one I had...!

Blah. Bland and boring gameplay, uninteresting shots, really plain playfield for its era, and there is a definite lack of sounds. Should be more to it. A cookie cutter table made with a crappy mold.
7.009/10
9 years ago
GEM

A rather rare game by the numbers : 1,500 produced. Atlantis has a decent layout with a shooting submarine and a vuk that sends the ball down a habitrail to the right inlane. Its million dollar shot is fun to try for and when the lights go out and its flashing red-well its pretty cool. The game screams for LED's. It is definitely worth a try if you run across it and have a chance to play.

The game is a mixed bag of fun , Has a Submarine that shoots balls at your flipper for Multiball . As a 3 ball game it is hard to score high unless you hit multiball. The Game is Sexy when it comes to the Girls on it and in the Speech . The Playfield art is Somewhat called cartoonish biut i happen to like it , the Playfield plastics are very nice .It is a Nice looking game with the seal of the illuminati on it /Hmnn Atlantis/illuminati / treasure / Much fun and you don't see them everywhere and hard to find nice but when you do they seem to be had for cheap.. underrated pin .

PinFever has owned this game in the past.

Once you play this game you will come back to it time and time again. Plus the back glass has the most beautiful girls on a machine ever.Rare machine to find