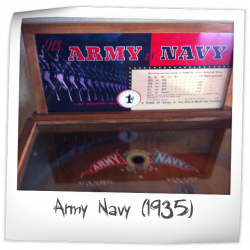 Notable Features: Recycles a single ball in play. The yellow "football" in the lower playfield sits on a chain that moves it, left or right, across the football field by 20, 40, or 60 yards, depending on which hole is scored in the upper playfield by the ball in play. When the football reaches an end zone, it falls into a scoring hole and the appropriate score reel is increased by 6 (or 3 if it was a field goal). After falling into a score hole, the football is ejected from below the playfield back onto the chain at the 50 yard line, ready for the next shot. The mechanism that kicks this yellow ball from below the playfield is powered by the motion of the ball lift lever. It is reset each time the lever is pushed by the player to lift the next ball to the shooter alley.

This is the most sought after Rockola game of the era. Rockola collectors refer to owning World's Series, Jigsaw and Army Navy as the "triple crown".

Notes: This is one of the last fully mechanical pinball machines made by this manufacturer and has a wood finish playfield. Compare Rock-ola's 1935 'Gold Top Army and Navy'.

We have seen this game for sale in the Pinside Market 2 times. The average asking price is $27,500