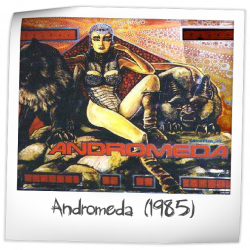 Andromeda, to me, is the definition of a “one more play” game that just never ends. I have literally gone thru 25 games of “just one more time!” It is without a doubt, one of the most hidden gems of the early SS era. Unfortunately, there were just so few made that most collectors will not even have the chance to play one, let alone own one.

Pros:
-The artwork is absolutely stunning. May be Paul Faris’ best work. The mirroring in the back glass has to be seen in person to be appreciated.
-Solid layout with frenetically fast gameplay. The flippers (if original Gameplan solenoids) are crazy strong!!
-Such a great sound package. Really is unique and puts you in the theater of the theme. Unfortunately, it is missing two things IMO: the beating doesn’t increase as you score more points (tho it does during multi ball which is very cool), and no speech (which by the time of the game’s release, was sort of expected).
-Rip the spinner! So many great shots including sniping the drops, ripping the spinner, and locking up multiball. You are also rewarded handsomely for rocking the game when in the pop bumper garden.
-Very high quality build. Better than Bally of the same era.
-The ability to backhand several shots (due to the strong GP flipper coils) is rewarding.
-The geometry of the shots is really spot on. So much better than some of its era’s contemporaries.

Cons:
-Not a huge deal, but no speech. I want her to talk!
-Certain Gameplan parts (the drop targets for one) can be hard to come by. There’s a market for someone willing to repro GP parts!
-There is a slight potential for a shot that goes up, hits nothing, and drops right back down: left flipper, straight up. 99% of the shots are tuned perfect but this one exception could have been slightly tweaked.
-Good luck finding a copy of this deck, especially one in decent shape.

Takeaway: if you can find one (regardless of the condition), just buy it and thank me later (I drink Kentucky Bourbon Ale).

A phenomenal game with a truly unique layout. Holds high in art and gameplay of the best multiball Bally's like Fathom and Centaur and plays very similar but with a touch of Paragon thrown in there. Gameplan's best title essentially uncontested.

Pros: Gameplay, layout, rules, and art.
Cons: Speech, rarity, expensive like Centaur if you can even find one.

nikpinball has owned this game in the past.

had never played one and got to try one at replayfx2016. Amazing game, art, playfield, backglass, gameplay, and the multiball was a challenge to maintain. Really liked this pin. One of the standouts for me in replayfx2016
9.023/10
4 years ago
DEL

Great looking game. Sounds are good and suit the theme but I had to ding it for no speech in 1985. Lightshow is good and I like how they flash the GI on and off quickly via the relays. Play is where it shines. It is fast on a well set up game with fresh rubbers. The protective post make the spinner a tight shot but it can be backhanded fairly easily. Hit the corresponding stand ups to light the pops for 1000. Drop all the drops to light extra ball and special. Better nudge as the ball comes down the middle drop lane or it might go SDTM. Drops have a tendency to brick but I am using DE targets so don't know how that is affecting it. Hit the single drop then lock a ball in left orbit, don't hit it too hard or it will blow thru the saucer. Then hit the left standup to start MB. Watch out, if you don't hit it squarely the ball will likely go straight across to the right drain fast. Good news is you only lost MB. Bottom left pop is interesting. Keep left flipper cradled for protection if the ball is over there. Very fun pin and I am glad to have such a nice one in my collection. I just wish she could talk to me like Xenon. But would she be saying Ooohh and Aaghh or Off with his head?

I played this at SFGE, and I really liked it. I was only able to put 5 or 6 plays on it, but it was unique and fun to play. The lower pop bumper make things very interesting.
8.592/10
5 years ago
DAN

Artwork almost reminds me of the dune movie...I like it. Backglass is totally bad ass.

I've played other Gameplans, they feel cheap...this one does not.

Layout looks bland, but the rules make it more interresting than meets the eye. Lots of fun and after several play I wanted more! Too bad their aren't many to go around, I think collectors would be all over this of it were a bally/williams of the same era.
9.480/10
7 years ago
ZUL

Andromeda is an most interesting deck. I like the way it plays and the artwork is a nearly unknown Paul Faris masterpiece.

The Pros:
Spider girls and bat dogs are cool! But I gotta know, if she has 4 eyes and arms, why doesn't she have 4 boobs? Unusual sounds and the mulitball lightshow is a great jumpstarter. The Spinner is a huge money shot and is not easy to make. Shoot the bonus x to 10, max the bonus ladder and the game sounds like a chainsaw when you collect it all!

The Cons:
Hard to find and pf's can be trashed. Putting the ball up the multiball saucer too fast will send you to the lanes at the top of the PF, AAaagh!!

The Takeaway:
The left side of the PF is a williams game. The right side of the pf is a gottleib and the pop bumper down below by the flippers is something that had only been seen before in early 70's williams games and other Game Plan decks. Stealing your opponent's multiball is always satisfying. A true player and a damn fine table. Thank you to Kevin and Carole at Lyons Classic Pinball for introducing me to this deck.

Update:
Well, I still can't find one. The good news is that the one at Lyons is awesome and plays like a champ. The switch lane between the drop target banks will test your nerves and your aim. Light up and rip that spinner for the big scores. Multiball is fun, fast and tricky with the pop on the left just over the flipper. Between this deck, Sharpshooter (1 & 2) and Cyclopes, Game plan made a few great games! Find one and play the heck out of it.

Update v.2
Start multiball, let the rest of the game come to you. Rinse and repeat. Live happy pinball life! Go for the Chainsaw!!!

Surprisingly fun game from 1985. The artwork is absolutely stunning and will leave you mesmerized. Gameplay is solid. Good flow, easy to learn, and fun to replay. You can't go wrong with this Pin.
8.602/10
8 years ago
JER

Great game! Very glad I own one!

A great game. The art work is awesome. Always fun to play.

i like this game i play it at lyons classic pinball i have to play it everytime. its an older machine but very fun it has a sling on the left side where the outlane should be. not a bunch of toys and the sound is generic but its just fun

Played this wile visiting a friend's house. The art work makes this game! It has a kind of goth evil bat theme. Very cool. This game play is fairly fast paced. All in all a very fun game to play!!
1
There are 12 ratings (that include a comment) on this game. Currently showing results page 1 of 1.