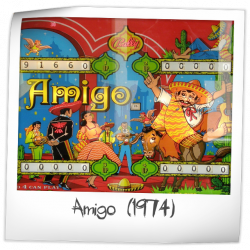 Amigo is the first game that legend Greg Kmiec designed before creating such classics as Xenon, Captain Fantastic, Pinball Wizard, Six Million Dollar Man, and more. In fact there are several elements of this game in common with Six Million Dollar Man as game features PlayMore Post between the flippers, spinner, side gate. A fantastic first game for Greg but must have been made before his Single Red Post signature that he developed later on to spite Bally who didn't allow designers to have their name on their designs at the time. 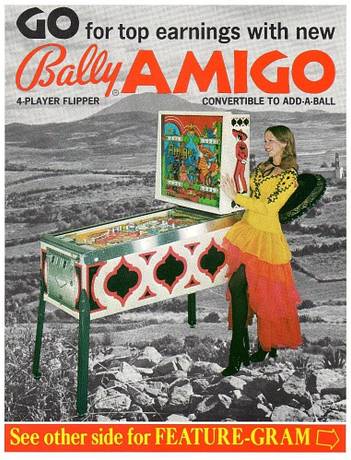 This game has received 14 approved Pinsider ratings and currently has a rating of 6.521 out of 10.

There are 9 rating comments for this game.

62 Pinsiders have this game in their collections.

5 public locations known where you can play this machine.

We have seen this game for sale in the Pinside Market 6 times. The median asking price is $600

There are 61 forum topics linked to this game,