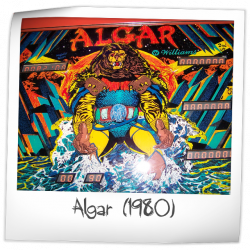 This game has received 11 approved Pinsider ratings. 19 more approved ratings are needed to get a rating and for it to be eligible for the Pinside Pinball Top 100 ranking.

This game is totally my style, a huge widebody with just a ton of lanes and crap to shoot on the playfield. The three captive balls on the side of the playfield have really neat mechs that hold them in place. Give me this over Gorgar any day, it's a shame it's so rare.
5.818/10
7 years ago
DAL

Interesting wide body from Williams. I don't know what the hell the theme is gorgars cousin? Was fun to play while I owned it, was a drain monster and a little slow being a wide body. Like I've said before, good to play or own at some point just to say you have.
4.232/10
7 years ago
RHO

The machine has a commanding presence with its widebody frame and bright orange cabinet, and even though the art is just so-so (a typicall Constantino Mitchell mess), it works when you place the machine in the correct time period with other early Solid State offerings. It is easy to realize why players balked at Algar upon its initial release, however, with a game as rare as this one, you’d be silly not to put a few games on it if you were able to find one. Crazy they created this a follow-up to Gorgar and didn't include speech! Check out my full feature here: http://creditdotpinball.com/2014/05/24/featured-game-williams-algar/
6.435/10
8 years ago
CFL

Algar is a game that plays like it looks, absolutely horrible. Coming from Williams during this era is a real feat of falling flat on it's face.

The Pros:
The sounds are unusual and cool, take a hit of acid for maximum effect. Center shot/loop to left flipper is tight and requires accuracy.

The Cons:
Has to be Constantino Mitchell's muddiest and most crowded artwork ever. PF design is convoluted at best. Lionman's (Swords of Fury) [email protected] wall eyed father in his full glory shows uphere. No flow whatsoever. For a game this wide... that ball travels side to side ALL THE TIME. The trapped balls use an interesting mechanism, but why not just use drop targets? The trapped balls take up a huge amount or real estate on the PF. Good thing this is a wide body game... right? Um... maybe nothing can save this boat anchor.

The Takeaway:
[Steve Ritchie refers to Gorgar here:] "Gor's brother Al" is what we used to call Algar. The Gar family kind of died after that. I don't remember BK as having anything to do with Algar's failure. BK was a narrow body and built on a different line than Algar. Algar didn't earn money. I think Al was just a dud of a game."

This game is rare for good reason. It's a stinker! Steve Ritchie was right!

Update:
Even as a tournament game, this deck blows. The biggest points on the deck are from the 3 captive balls. Knocking a captive ball drops is into the mid-outlane on the right slingshots. A successful shot is almost always rewarded with a drain. Risk/reward, my left foot... this game is just absolutely horrid!

Had a chance to play this rare game for several hours at a friends house in his collection of many pins. Great game, wide body yet plays fast, captive ball shots build potential points then a tough up field shot to collect the points. Crazy middle of playfield direction changer...lot going on. Art work great early 80's dung/dragon type feel.. Don't know why there weren't more produced.
1
There are 7 ratings (that include a comment) on this game. Currently showing results page 1 of 1.