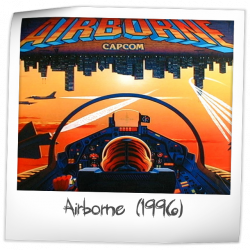 Severely underrated game. I'll say it..... this game is better than F-14 Tomcat by a country mile. Great layout, tons of shots, a great skill shot, multi language game modes, great theme, wonderfully intricate ramps, great backglass. This is a top tier wishlist game. Too rare to find in the wild. I wished they'd made 10000 of them.

douggalecawitz has this game on the wishlist.

Cool rare machine. I think this game would be more popular if it wasn't so rare. Most people have never played it. Would be 100x better if color DMD available for this title, which should be soon.

jake35 has owned this game in the past.

The ramps and rails are so over the top in this game and they become a distraction instead of a positive feature. It's fun but just doesn't have the lasting power you'd expect from such a cool looking game. Capcom quality is so awesome it is a shame we didn't see more tiles from them.

davideokills has owned this game in the past.

This is a lot of fun when in good condition and set up properly. So many things going on that are unrivaled in many other games. This game relies on good shot placement. It's an excellent example of a quality designed pinball machine.

DMC has owned this game in the past.

I was looking for years for a nice Airborne, now I have it and shopped it out. Plays like new, looks like new. Vrery nice and fast games, only the straight missions are not optimal. But in all a very nice game with lots of fun, great sound and animations, a technic WMS was dreaming about in the late 90´s.
Not too expensive but hard to find.

Wow! Never saw this before this weekend...what a great game! Starts with a wonderful skill shot...lots of options off the plunge and locking a ball is one.

Wicked fast. Center ramps remind me of who dunnit?...but don't miss! If you do it is a rocket right back to you.

Hard to hit drops on each side...great ramps...deep enough rules that I could play this a lot more! Really love the layout...if this were themed as top gun with Tom cruise on the backglass their would be 5,000 made.
7.240/10
6 years ago
AJ

Super fast and lots of fun. Lots of wire forms too which is cool but the games not all about the ramp shots.
9.096/10
7 years ago
NAM

kwiKimart has this game on the wishlist.

The cab and the translite are ugly but the gameplay have lot think to do,it's hard to see all toys on the playfield,very unknow funny game

powerslave has owned this game in the past.

Capcom has made some decent pins (Big Bang Bar probably being the best). This is not one of them IMO. The wire forms are cool, but other than that, this game just bored me. Not much to it. The skill shot at the beginning is cool, but I just didn't dig this one. I wouldn't buy this game unless it was crazy cheap (like $350). Pass.
5.457/10
8 years ago
ZUL

The Pros:
I LOVE this BG with the upside- down perspective. The PF is laid out with some good shots. The game feels solid and the eject button is a peek at the humor to come in Big Bang Bar.

The Cons:
For a game about flying... there is no flow. The game just does not feel satisfying. High in the "Meh" scale for my tastes.

The Takeaway:
If you like the theme and the Capcom feel... Give this a go. I'm looking for other games to play besides this one.

Update:
After spending some time on a friend's copy. This game can be broken down to left ramp all day. It's a shame really. All those habit trails and mechanisms...

Update V.2:
I love the plunger/flipper bang down skill shot. The lock in the upper right hand side of the PF is REALLY well done. Not a fan of the 3 standups and 2 lanes so close to the flippers. So many habit trails, this deck must be a beast to disassemble and shop. Is it me or do the dots look muddy for the most part? The rules still are escaping me, but that just means I'll have to play it some more! I am happy to give this game anther chance, errr... frequent flier miles to really find out what it is all about.

Airborne is a great game! It may not be very polished in the rules department, but when it's properly tweaked, the thing is super fast and fun to play. The playfield layout is unlike anything else out there. I love how you can lock balls in three different locations. I also think the skill shot with the injector was a very clever idea. And you gotta love the wireforms on this game. I can't think of another pin that has more of them. I particularly enjoy hitting the scoop ramps. Just make sure you don't miss, or those yellow standup targets will send the ball back toward the flippers at insane speeds.

If I had to complain about something, it would be the linear gameplay. It's not a deal breaker by any means, but it would have been better if the modes were in random order. Some people are bothered by the fact that it's difficult to hit all the targets from the flippers. This may be true, but once you get used to the shots, it's really not that bad. Plus, the ball flies around the playfield so fast that you'll usually have no problem completing the banks purely by accident.

Overall, Airborne is an absolute blast to play. If you get a chance to add one of these to your collection, I highly recommend it.
6.931/10
9 years ago
MIC

build quality is top, as all CAPCOM, but i cant found the fun i got with PINBALL MAGIC... :/

RipleYYY edited previous rating on May 19, 2019.
RipleYYY has owned this game in the past.

My first pin, decent layout albeit feels a bit cluttered until you're used to the shots. Very very fast gameplay. The game rules are time based and many players consider the ruleset to pretty much unbeatable.

Some have called this pin "cluttered." I say it requires precise shotmaking. Best Fun with Bonus countdown music ever. Also, it's linear like Pinball Magic, though the timer relieves the player of the obligation to make a shot before other ones become possible.
6.092/10
11 years ago
DAK

One of those games I had to have then once it was here, had to go. I challenge anyone whom has said they have beaten this machine to look me in the eye and say it.
The one unbeatable machine on the planet. Frustratingly not enjoyably.
The ramps while a big draw to the purchase were in reality just that; eye candy. Not really used or useful in the game to the extent of their presence.
Buy a Breakshot if you want a Capcom deal.
Like the saying ; "Less is more"
1
There are 21 ratings (that include a comment) on this game. Currently showing results page 1 of 1.