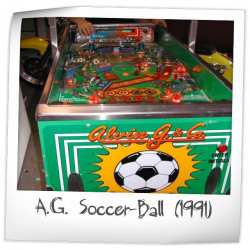 I finally got the chance to play this game at Pinball Jones in Ft. Collins.

The Pros:
A well laid out PF in a similar vein as Williams' Joust. There are lots of ways to get the ball over to the other side. The third flipper is placed right in the way of a cross playfield kicker shot and it can be deadly (if the shot is properly set up) to your opponent. The drop target between the flippers reminds me of Diamond Lady in it's setup.

The Cons:
Got A.G. parts? I have not been able to play a copy with the wires on the other flippers (auto flips)... because the operator didn't have the parts...

The Takeaway:
The copy I played didn't have the wires to fire the opponent's flippers. So while I was only able to play a head to head two player game, it played really well. This should be a great table for parties and collectors who like low-run (500) pinball designs. Still not as awesome as two linked NBA FastBreaks (but then again... what is?), but still surprisingly fast and engaging. Find and play one when you can!
9.183/10
5 years ago
PAL

Great party game! It's cool that you can play against the computer but this is awesome 1 on 1!
1
There are 2 ratings (that include a comment) on this game. Currently showing results page 1 of 1.