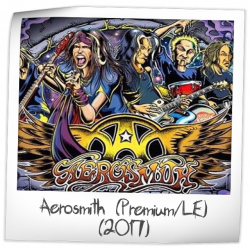 This game ranks 2nd in the game group "Aerosmith". The group itself ranks #64 in the Pinside Pinball Top 100.

Note! There are multiple versions of this game!
This is "Aerosmith (Premium/LE)".
The other version is: Aerosmith (Pro) (regular version)

There are 58 ratings (that include a comment) on this game.
Currently showing results page 1 of 3.

I’m a huge Borg fan and this is one of the reasons. Great game play is awesome with great flow and the modes are very intuitive interacting perfectly with the animation. Adult mode has a few very funny surprises. Toys are well designed and integrated nicely in the flow of the game. The ball capture and shot into the toy box is a classic. The elevator mini playfield is challenging, but very doable making it a lot of fun. You just can not beat the music on this pin. It keeps you coming back for more!!!

Makdaddee has owned this game in the past.

Love this game. The music just energizes you as you are playing!

Really a fun game. Don't love the band, but really find the game fun. When I find it on location I end up going back again and gain to play. Animations and artwork are a bit goofy, but still, really a fun game.
10.000/10
1 year ago
???

mslav72 has owned this game in the past.

Nog a big fan of the band. But this is one of the best
music pins out there. The toy chest is amazing. And the flow fantastic

Update. The music is growing on me to.

The music and artwork are very good. The game is lacking in number of shots and the upper Playfield it's not the best. Overall of the newer Stearns this game is definitely closer to the bottom than the top. The Playfield layout it is not very innovative like Jurassic Park, Avengers, and others.

This is a really good game. Rules are deep. The toy box and elevator are pretty cool.

Wopmike2001 has owned this game in the past.

Toy box is a great toy, but gets old fast. I had this in my collection and after 3 months I was bored with it. Too bad, I love Aerosmith, but just doesnt have the lastibility of MET or AC/DC.

Animal has owned this game in the past.

I really don’t like the artwork. Too cartoony for my taste. But the game has variety and challenge. I go back every time I see it.
7.892/10
2 years ago
DAD

One of the best multi-ball modes out there as I love the flip of the balls into the chest. However, the rest of the game is a bit boring.

One game I love coming back to play with a well thought out play field keeper in my books
8.460/10
2 years ago
TKM

This is my least favorite of the newer music pins despite being an Aerosmith fan. The ultra-cartoony artwork is a turnoff for me.
I also feel that this is one of the better sterns made in the "pro" model comparative to the LE.

Such a fun game. Yes it’s not as deep as some others but it’s more fun. They could have used more songs. I put my Bluetooth speaker on top of the machine and play some of my favorite Aerosmith songs, especially Dream On. I love the band. I think you need to love the theme first and then the gameplay in the pinball world. Buy games that you like the theme of and it will last longer in your collection.

I think this pin has a lot going for it. Really good music, great animations, a nice sense of humor, and one of the all time greatest ball locks EVER!!!! Not a really big fan of how this game shoots... I just couldn't ever truly get dialed in. Again, part of that is play better, but most of shots are just different from what I am used to aiming for and going for. Its a nice unique playfield and a decent rule set. I like that you can stack the light locks. And I like the risk reward for MB. What I don't like is the unique rule set for each song... I rather you enter modes for the songs, but pick a song to listen to when you're not in a mode like Iron Maiden. As there are some songs I like better, but hate the modes... While I really like the music, I think the callouts are really weak. But, the animations are funny, cheeky, sexy, and cool... Really topnotch animations. The upper playfield doesn't add too much to it... But, it does have some risk reward to it, as you don't want it to fall down the ramp and risk a drain, but going for the standups and upper loop, or even elevator and getting a lock are a nice feature. Fun game, and perhaps it could be in my collection one day... If I have a 50 pin collection.
8.460/10
3 years ago
MAC

One of the best music pins to come out! Awesome job goes to John Borg and Stern.Game play is smooth and the artwork by Dirty Donny is one of the best. I was never a fan of the music pins and now I have 3 music games.
Aerosmith is going to be classic.

bmegar has owned this game in the past.

This has a ton of potential if the game code gets a good update. Just gets old and boring after a while. I have a large collection and most likely wont ever sell it but that being said it's still a great pinball and come on it Aerosmith!!

Super fun game. My two favorite aspects of the game are probably the artwork and the toys (mechanical action.) I love the way the ball gets launched into the toy chest and the start of multiball with Jacky shaking is super cool as the pinballs pour out of the toy box. The upper playfield with the elevator is one of the best upper playfields I've seen. It's great having to backhand the targets there and then have to have the ball run off your flipper to make the shot to the right. I'm not a huge Aerosmith fan but the songs in the game are definitely some classics and I really like the animations that were done, such a huge improvement in the fun factor over DMD games. All around a super fun game that doesn't get talked about a lot. ONE thing I would like to see better utilized is the "smart" button on the lockdown bar although Stern has been saying another code update is coming at some point so we'll see.
Next123
There are 58 ratings (that include a comment) on this game. Currently showing results page 1 of 3.