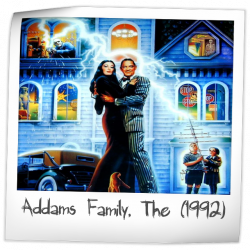 This game ranks 1st in the game group "The Addams Family". The group itself ranks #14 in the Pinside Pinball Top 100.

Note! There are multiple versions of this game!
This is "The Addams Family".
The other version is: Addams Family Gold (Special Collectors Edition), The

There are 677 ratings (that include a comment) on this game.
Currently showing results page 8 of 28.

Pat lawlor what a genius

I would say I'm a casual plus player. I enjoy playing pinball because I have fond memories of playing pinball at my local pizza joint when I was growing up. When I see a pin, I usually throw a couple of bucks in but I'm not an addict (at least that's what i tell myself).

Addams family is one of those games that feels like riding your favorite bike around the neighborhood. Easy to get on, easy to ride and easy for you to enjoy. Love the theme and game play. My downside is that when you play this pin in public, it's usually in horrible shape which leads to a poor experience. I honestly haven't encountered a good pin in public and get my fix on Pinball Arcade.

atwong has this game on the wishlist.

This game keeps me begging to play more definitely a keeper

The ultimate classic. The only things I can criticize would be the library disc being lackluster and the game becoming too easy, but, hey, most pinheads learned on this one. I have avoided adding this to my collection because TZ covers Lawlor's design much better and has much better lastability. That being said, if I see it on location, I will definitely try a run at touring the mansion.

Best start to multiball in all of pinball!

Tranquilize edited previous rating on May 19, 2018.

If I owned a pinball company and wanted to produce the ultimate game, this would be the one! Sales numbers aside I think only AFM rivals Addams for being the total package. Neither playfield layout, rules, artwork, sounds, nor animations make the game alone. But when you put it all together you get a masterpiece. The design team just crushed it. The buildup to multiball is probably the most exciting since Black Knight, and the building the mansion is stupid fun. Although short, Seance is the best mode ever. It's probably all been said about Addams Family. And yes, I'm a little nostalgic as I remember playing it in the arcade in the 90's. If Addams Family was built 5 years later, had WPC 95 technology and lower sales numbers we'd all be paying double the price for it. Knock three times.

This was my second pinball machine ever. Bought it used a few years ago, and have loved ever since I played it the first time. The rules are pretty straight forward, but also challenging. Just sheer fun over and over.

Morhaus has owned this game in the past.

TAF - Bally's magnum opus. The top selling machine in pinball history. The year is 2016, and I finally have this in my collection. I was very blessed to receive this machine from a fellow Pinsider, and he had taken great care of it. Very happy to own one, and I'll jump right in.

So, TAF was introduced right as DMD graphics were first being produced. On that note, there aren't a WHOLE lot of animations on the screen and they can seem a bit repetitive. It's nothing that ruins the game, in fact, to me it's a "less is more" scenario that gives TAF a lil' bit of throwback charm. Just don't go in expecting movie clips like today's Stern games. Not going to happen.

Gorgeous translite art fully encapsulating the vibe and image of the movie the game is based on. Cabinet art is subtle with Thing twirling and shooting the pinball all over the place. Great stuff, looks the part and to the point.

The playfield with the mansion center stage - looks fabulous. It seems like we have seen this layout before, say, Whirldwind? Not a direct copy by any stretch, but you can see the similarities, and hey, with Pat Lawlor working both - I think that's a bit expected. No biggie here.

The gimmicks and toys on this one, man - the 3 magnets underneath the playfield, Thing coming out of the box and taking your ball, the "Thing Flips" flipper shooting the shot for you - you just don't see this level of toys anymore. Hell with all the bash toys (looking at you MetPro and TWD): THIS is how you implement features and toys. And then after you drain the ball, Thing randomly flips the flippers with the end of the Addams family music. Absolutely awesome.

The sounds and callouts are pretty good overall. Raul Julia put in some very intense custom voicework for us, and man, did he give it his all - especially with "Showtime!!!" and "Who says you can't take it with you???" Lightshows are spectacular on this one - especially the buildup to Showtime MB - fan-flipping-tastic.

Look, I'm slow here with finally owning TAF 24 years later after it came out. Think about that, a quarter century since it came out - some of your kids have been born and gone to college already before I bought my TAF. Why would I go with this over a new Spooky, JJP, or Stern? It's just got a charm to it. This was pinball at its peak when there was "magic" still to the game. Everyone knew TAF, and this game crosses 3-4 generations of people who love TAF. It doesn't feel cheap or watered down with its QA, and it certainly doesn't feel like a collector's item in terms of rarity. It is a game for everyone - not just people with deep pockets or those who love supporting a company that keeps cost-cutting while price increasing.

It is simply a great game, and sure, touring the mansion is easy, but there's more to this game than that. It is a game of character with some of the most recognizable characters in film history. My only regret was taking so long to finally get one. ColorDMD and Pinsound board already installed, and man, with the motion picture orchestra score playing, this game just got even better....!

The only problem is finding one with a great playfield. These games were beaten into oblivion, and with CPR scheduled to release the repo playfields about the same time I look to retire from the Air Force, make sure you shop around and find one in solid condition. There's a lot of them out there, but don't take too long. They are getting harder to find in solid condition without paying a small fortune.

jamesmc edited previous rating on August 13, 2016.
jamesmc has owned this game in the past.

Such a classic game. I love it just as much now as I did decades ago.

LewisD has this game on the wishlist.

I really like this game; it's laid out well and gets fun and creepy at the same time. "Thing" is fun. I hate the damn multiball mode. The magnetized center always makes me lose the balls.
9.020/10
3 years ago
MBS

This is the game that got me hooked. Every well-rounded collection deserves to have this in the line up at one point. Not much else to say. A true classic in every sense, with great shots and the best multiball intro of all time.

This is such a fun machine. It was a favorite of mine when it first came out and is still fun today. The call outs, light show and Thing really make the game.

This is the game that started my interest in B/W DMD pinballs. I played $2 bucks worth every week during my bowling league. The kept sound up which made it fun. Great art, light, and sound package. Perfect theme implementation.

Whenever I think of pinball, this is always the first machine that comes to mind. I loved this machine when it was new, and I played a refurbished one recently with color DMD and this game is as good today as it was when it was new. I love the gimmicks on this machine.
8.000/10
4 years ago
CWS

I love this pin and play it whenever I get the chance. I remember playing this a lot in my younger days and would feed a lot of quarters in it. Gameplay is great. Artwork is great, Sound is great. One of the best things with this game is the start up to multi ball. When this game lights up and "SHOWTIME" is announced, your adrenaline is flowing and it makes the hairs on my neck stand up. LOVE IT!! I would love to add one of these to my collection, but they aren't easy to come by where I live and when you do find one, they are expensive.

cs3030 has this game on the wishlist.

Great balance between challenging game and playable game for the whole family.

My favorite game to play. Nothing better than the build up for multiball "it's showtime!"

Watching Thing grab the ball never gets old, and the sound and lights build-up to multi-ball is the best presentation ever. Perfect blending of theme with a pinball game. Raul Julia's call-outs are very unique, along with some of the kooky sound effects. The modes are all quite varied, and none of them feel like chopping wood. The layout is perfect and balanced for making a game with a lot of flow but is also unforgiving if you don't know the shots to make (or goof up). The game has been played to death by pinballers for 25 years and will be for many many more.
8.136/10
4 years ago
???

Fun machine not hard to understand why it still is the best selling machine in history.
8.032/10
4 years ago
MAL

TAF was always high on my list.... until I actually owned it. I love the movies. I thought I would get it and love it... But it just never clicked with me. I enjoyed playing it now and then, but found it to be to easy and repetitive. I know it's the best seller of all time... but it's just not one I would ever care to own again.