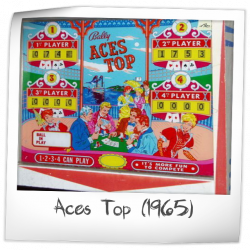 Aces Top is exactly the same model as Aces High, project-date May 1965 and production in August 1965.

Serial-Numbers for both models start with AH.

Production-run of 1275 includes both versions.

It's not known if the change of the name has something to do with specific countries, sample-games or whatever.

There are 3 forum topics linked to this game,