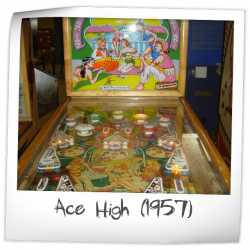 This game is a sensational player and deserves it's reputation. The art work is typical Roy Parker and is a very nice overall package. What's not to like?!

I had heard that this game was a fantastic player with many saying it is one of the best playing em's ever made so I had to track one down and buy it before I even played a game. Now after a good few months of ownership I can give my review.

Gameplay. This is a shooters, nudgers, players game as it is possible for better players to really beat this game. And with it's jackpot specials, this was another game played to death on location and it's tough to find good condition examples for this reason.

There is the standard way of winning on millions but it does involve strategy to try and win. For example lighting the slings to alternate giving 100000 points.

If you lose a ball in the 2 gobble holes you can be awarded 500000 or 1 million if lit so it doesn't feel so bad to lose the ball sometimes.

There are 4 outlanes that correspond to the the 4 colored pop bumpers and so a ball lost lights the pop bumpers for 100000. Again, this makes it possible to score big on the final ball or two. And light all 4 and you are rewarded with a special if you drain between the flippers.

So, already a good game but the best is yet to come! There are 3 targets and each target has to be hit in the center to light the Queen, King and finally Ace. An off center hit scores 50000.

Hitting the targets in the center is way harder than it seems and incredibly rewarding when achieved. The bell sounds with a direct hit. As you get closer and closer to getting the 3 Aces lit, the adrenalin is really kicking in. Once targets are lit, try getting the ball in a well guarded gobble hole when you really need to!

Ball can be trapped, controlled by the flippers so hitting targets is very much dependent on skill but it isn't easy!

I probably win more replays on this game than my other woodrails and it would make sense why this game was so popular with players in the 50's as the games that pay out will get played way more. Equally there are times the game just seems to eat balls and so at no time does it feel easy.

This game when set up correctly is a fast, addictive player, my favorite so far post 1955 ( of the em era ) and is a game that is worthy of 'keeper' status!

Ace High is an incredibly good looking Gottlieb woodrail. The play isn't tops, but it's not bad either.

The Pros:
The BG and the PF are stunning. I mean... wow. Two sets of slings on the sides of the PF mean that the outlanes on the side of the deck always pose danger to the ball in play. The pop bumper layout is well done and the game's action is much faster than expected. Bullseye targets are way sweet. Light your Q-K-A and make this deck sing!

The Cons:
I really don't like gobble holes. I like them even less when they are positioned to swallow your ball before it gets to you flippers. Expect your 5 ball game to last less than 45 seconds.

The Takeaway:
A good strategy game from Gottileb in regards to the gobble holes. Do you go for the Million/Special shot? Do you play on? Decisions, decisions...

Fell in love with this game at the Pinball Hall of Fame in Las Vegas, played it for hours once I figured it out!! Very challenging, as most woodrails are, no easy shots and a drain out the sides is almost assured on an errant ball, but once you get into the gameplay this is a great game of it's era, and one of the most attractive games to boot!!

Really enjoyed Ace High while I played it. The scoring system surprised me, since you can get Millions of points, which I don't see often in an EM as old as this. It was fun, but not the kind of EM I'd want to own.
1
There are 4 ratings (that include a comment) on this game. Currently showing results page 1 of 1.