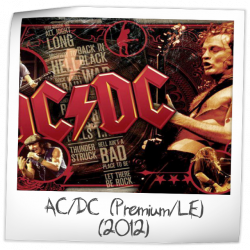 This game ranks 1st in the game group "AC/DC". The group itself ranks #19 in the Pinside Pinball Top 100.

Note! There are multiple versions of this game!
This is "AC/DC (Premium/LE)".
The other versions are: AC/DC (Pro) (regular version), AC/DC (Pro Vault Edition)

There are 498 ratings (that include a comment) on this game.
Currently showing results page 1 of 20.

AC/DC rocks. I literally owned this game 3 times. LE, LE. Premium. Everything about it is fantastic. I only wished that it had come with molded toys and less assembled plastics to make up the look of the game. Lower playfield is fun (though it gets dirty kinda easy) and the thrill factor for new players is also amazing. FAST FAST FAST and fun pinball here.
8.600/10
32 days ago
SYD

Not just a jukebox, but a very clever and well thought out game. Converting each song into a literal representation on the playfield was a genius idea. I can't play it for long before boredom kicks in....I just don't like band games - only their music is interesting, the band not so much. But this game holds my interest longer than the others.

I only play these type of games when other nearby games are either broken or occupied. And for a few minutes it can be a lot of fun.
9.474/10
76 days ago
ACH

What can I say AC/DC Lucy vault gives you the total package beautiful art work, Fast and smoothest shooter highly recommens. Musics rocks but unfortunately the actual sound is not the great .

This game is drain city. It sucked. It's bad. I was so excited to jump on it. Wow was I disappointed. Drain every where. In multiple games. Quickest games of the 30 game lineup in there. Horrible. Super disappointed. Maybe if it's on free play and you don't care about the constant drainage. Doesn't even compare to iron maiden or metallica or aerosmith if you are into rock band themes. Dead last out of those and many many others.

This game has a nice flow. Love the cannon, lower playfield, music, and rules. The art work is so-so. Not as fun for casual players or kids who aren't into ac/dc.
9.250/10
6 months ago
BDL

Great rock and pin marriage. lower playfield not great but fun extra thing that doesnt take up space (like an upper pf would). Music and immersion feeling is epic. Can zone in a just pinball/rock. Not incredibly deep but some strategy if want to get through. Def get upgraded speakers and woofer to enhance experience. Not sure on lastability- i think its a great piece/part of a collection but would need variety with your other pins for when youre not in 100% ACDC mood!

moat-pin has owned this game in the past.

Great game especially for fans of ACDC, I’m not a huge fan of them but still have fun with this game. The cannon is well implemented and never stopped being fun for me. Ramp shots feel smooth and the bell is a cool addition as well. Some of the art is a bit average and the train could have been done better but still a great game
9.015/10
7 months ago
THM

I do enjoy this game and often contends with other pins in my collection for my flavor of the week. The music is what makes this pin last.

mwthatch has owned this game in the past.

My first NIB purchase and I never regretted it. It is pure fun even though I am not a huge AC/DC fan but I am a huge AC/DC pinball machine fan! The toys and music are great - you can not go wrong with this title.

Currently own this pin- I'm a big hard rock/metal fan and the music and sound quality is great, especially the older songs with Bon Scott. The gameplay is terrific, with the shooting cannon and the "in hell" lower playfield a fun and challenging addition. The Luci artwork is sexy and a definite upgrade from the other editions. The taunting host is really funny when you aren't playing so well and is better than most, but could use a few more callouts. Not my all-time favorite in terms of playability, but is definitely on the do not trade/sell list.

Love the mini playfield on ACDC. Really fun and hard machine. Some awesome ramps and shots, Bell (and gameplay overall) can be really unforgiving, but this pin makes you a better player. It's hard and fast, but like Iron Maiden, it rocks!
9.840/10
1 year ago
RMF

This game is very fun. I love how the backhands are generally easier than a forehand shot. I like how it has mods for the different songs by AC/DC. The canon is my favorite feature on this game and when you get multiball and shot the cannon it is very cool. The only thing I think could have been better is the lower playfield, although when I originally thought It was so cool until I saw the lower playfield on munsters and then I realized it could have been better. I think AC/DC is an awesome game.

MasterReese edited previous rating on March 22, 2020.
MasterReese has this game on the wishlist.

Typical Steve Ritchie fan-layout with nice flow and speed. Especially the sound, lightning and integration of the Bell is outstanding (everybody remember the bell ;"doooonnng"). You feel like being in a rock concert.

Very, very deep ruleset...you have to study the game to be able to achieve a high scoring. Overall it is a difficult game; can be frustrating....therefore not recommended for beginners.
8.880/10
1 year ago
LJC

I waited to include my rating as I wanted to play this pin for a few months before I did. AC DC is a blast to play, but you have really crank the music up to get the best of this pin. The bell, train and other gimmicks really set this pin apart and make it a winner. I’ve added it to my collection and it’s one of my keepers great pin and is and should be in the top 20.
.

Overall a really good game. I think it’s a little bit tacky, like all stern games from this time period. It feels so much cheaper than others Williams/ Bally from the 90s.
8.700/10
1 year ago
RPA

Premium/LE AC/DC from Stern Pinball is amazing in so many ways. If you like Pinball and you are a fan of AC/DC this is a Must Have ! Only Pin that I know of that has Jukebox with studio and live tracks for all songs, Sensational !

With a loaded playfield and fast paced and super flow design from "The King" Steve Ritchie, Awesome audio from David Thiel, art package by J & C Youssi to the Epic code from Lyman F. Sheats Jr . Audio and Lightshow is incredible. Gameplay can be brutal at times but will keep you coming back for more.

Dialed in correctly with a few tasteful extras, Shaker, Sub woofer, Color LCD being most Amazing ! AC/DC certainly makes a top 10 pin of all time for me anyway. SAM electronics system appears to be most reliable at this time, added bonus for new pinheads.

Back In Black
You Shook Me All Night Long
Highway To Hell
For Those About To Rock
T.N.T
Hells Bells
Thunderstruck
Let There Be Rock
Rock ‘N’ Roll Train
Hell Ain’t A Bad Place To Be
Whole Lotta Rosie
War Machine

Disappointing game that I found to repetitive but I do love the music
7.213/10
1 year ago
TOM

The bell is innovated, but that is pretty much it for me.

Great modern era machine which makes tremendous use of multiple full length tracks to create variety. Layout pretty basic and lower playfield doesn't add as much as it could, but overall a good, strong package which deserves its lofty position in this list
7.600/10
1 year ago
PGR

It plays well, and at the end of the day that's what's most important, but I think it has one of the uglier playfields in modern pinball. It looks like the haphazard collages I used to scotch tape on my bedroom walls in the early '80s by cutting up copies of Creem and Circus magazines. And in several spots there's raised, 2D rectangles of drawings of fire, and one of them is a cannon, I think? What the hell are those?! They're some of the ugliest things I've ever seen under a pinball glass.

But it is a beast of a machine -- loud, fast, forceful. The shaker is strong and frequent, the bell chime will send a shiver down your spine, and the bassy, loud rock takes this to a different level than most other machines. Lots of multiballs, the lower playfield is a nice diversion even if very basic, and the cannon is fun to shoot but a bit of a pain otherwise as it really obscures your view of the right lanes.

AC/DC was an experience the first time I played it right after it came out (Lanes & Games in Cambridge, RIP), and I'll always chuck some quarters in it every time I see it. It's the perfect barroom pin. The band themselves play great drinking music (even if the demon hooch killed one of them), and this machine is just loud and rowdy, like a barfly who had a few too many.