You're currently viewing posts by Pinsider shimoda.
Click here to go back to viewing the entire thread.

Would love to join this club someday, love some drop targets and the crazy art on these machines.

These Zacs are too far from Georgia!

Looking for a Magic Castle, Robot, Farfalla, Devil Riders, or Time Machine (or likely any Zaccaria). In Georgia. Would love to find one or more of these.

I have all those games. There is no such thing as not for sale.

There's probably such a thing as I can't afford though. I found a Farfalla, the other two I want are Robot and Magic Castle. Robot is really the top of that list.

Didn't want to jinx myself, but I can finally say I'm in the club and still surprised by it. Picked up a nice Farfalla just now. Been trying to make this happen for about two months now and it's home. Still have to unload and get it working (as it wasn't working) but I'm tickled pink to have a Zac. Now to find a Robot to join it. 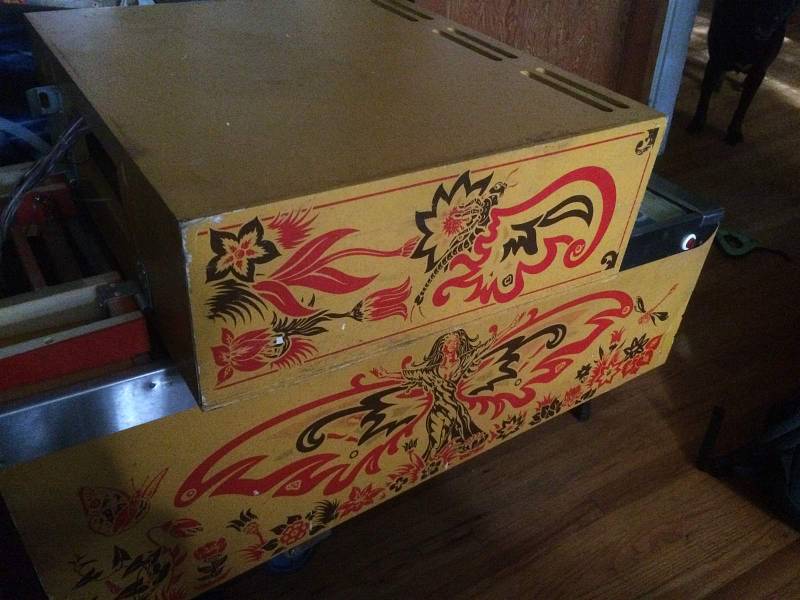 Magic Castle me please, with a side of Zankor.

Question about the caps. They have 4 posts, though are connected to two basic lines. Are they actually two caps in one or one cap and could be replaced with say a 15,000 mF cap like used on Bally PS?

I wish my Farfalla MPU were easy enough to fix. I've cleaned/socketed/replaced ICs 4, 13, 14, 8, 17, and still no boot. Of course I'm getting no clock pulse so next is to replace the crystal since IC13 is now new. Just want to get it running!

Can you give us some more details about your MPU boot up issues?
Did the game ever work for you?
Did you have to clean up any alkaline damage from leaking batteries?
Does the LED on the MPU come on and stay on?
Does the sound board LED come on at all?
Will the MPU LED turn on and then go off if you unplug the small ribbon cable that connects between the sound board?

Sure, I've been talking with David G about this a bit but I've never been more flummoxed trying to get a game to work and I've brought a few back from the dead. Other than the battery damage on the MPU, the other boards visually look good. I started by replacing BRs on the PS as one was dead. I also replaced F4 fuse clips as they were really corroded and wouldn't conduct (the other three all look good strangely enough). So I've got good voltages.

The LED on the MPU wouldn't do anything except either stay off completely or come on immediately and stay on, no flashing. I cleaned up, socketed and replaced IC8,17, still nothing but the occasional light. My logic probe won't pick up a pulse on TP9 or TP2 so it seemed/seems like there isn't a clock pulse except for the TP3 (INTREQ) pulses. I replaced some of the clock components (caps, resistors, IC13, 14 and 20 - also with new sockets though there wasn't really damage there). Sometimes the led flashes sometimes not but I don't seem to get a real booting. I've reburned EPROM 1 as it had a cksm of 0x05CC instead of 0x05CB, no real boot yet.

I found something surprising though, when I continuity tested the power (VCC/GND) connects on the ICs, with black on VCC red on GND I was getting continuity. D2 was shorted. Replaced it and now I get sometimes nothing, sometimes a short flash very quickly followed by the led coming on/staying on and sometimes a flash followed by about a second off then on and staying on. The last example seems like what should be happening but when I plug into the displays all I get are the occasional random number show up in one display, like a 7, then knocker fired a few times and sometimes after firing several (3 or 4) times it stays on.

As for the sound board the led flashes then goes off when not hooked up to the mpu, when hooked to the mpu it just comes on immediately and doesn't flash or anything, just stays on.

That is where I'm at right now. I didn't send it to David yet as I wanted to try and figure it out myself and knew he was a bit backed up but I'm starting to get to the point where I might just do that despite spending more than it would cost for him to fix it to order practically everything on the board. One thing I don't have is another CPU 2650A chip in case its the actual cpu that isn't working. Sometimes the data pins pulse, sometimes not.

Can someone give an idea about the value of Zaccaria parts (working / non-working) ?
I have no idea what Zaccaria parts are worth..
I now have 2 almost complete Robot playfields and some spare parts..
want to try to get one working on my PC82, the other one will be for sale then..
Saw on ebay one went for about $700 last year but as I'm in Europe, shipping a playfield to the USA will be expensive..
Also parted out a Magic Castle playfield, have most playfield plastics and droptargets of that one.
And recently bought a Pool Champion with broken backglass and cut wires. Resoldered all wires (except playfield lamps) so I could at least test and play the game.. cpu boots, but no sound. 4 of 5 displays work. Game plays, playfield is nice, plastics ok, ..
but without the backglass there's little to no interest where I live. No Zac collectors interested in rare games..
so I'm not sure if I would part this out and sell the boards, or try to find a USA collector who wants to buy it complete and ship it as is..
have no idea what working display boards or working cpu are worth..
Any help is appreciated..

Does anyone have a working Zacc MPU for sale? I'm still trying to get mine running but dang I want to play this game!

I wish there was a real redesign along the lines of the Janin board.

shimoda, back at the bottom of page 7, I asked for some details hoping I can help you with your boot up issue. Have a chance to look into the questions?

I thought I responded, but that must have been a thought. I did have to clean up some battery damage. I've socketed and replaced ICs 4,5,13,14,8,17, and 20. I've replaced R2-9 and 4?-53. The LED will come on sometimes, others not. Every once in a while I get what looks like a flash then nothing then led, other times solid on, or off. I have verified a clock signal (replaced everything there as well including the crystal just in case). The Sound Board led when not connected to the MPU comes on then off. Will lock on when the MPU is plugged to it. I'll check the last question hopefully later tonight and get back with you. I want this game to work so badly and though I could eat the cost I've already got and send the boards to David, I'm still stubborn enough to want to figure it out. I forked out 350 for an oscope to help out with this and future repairs and experimentation. About 200 or more in chips and whatnot so I want to try a few more things in case...

Then the biggest question, will the board boot up if you push on the MPU? Mine is doing that so I likely have a bad trace going to the IC socket that was installed by the previous owner due to the acid damage repair that was done. This will be something I will have to use an ohmmeter on to find a problem. Luckily, the schematics were online for me to print out. I will see if I can post a picture of this board I have. Sounds like yours had a lot more damage than the one I'm repairing. I think this one only had 5 IC's changed.

Just get the nvram for the WPC games, 8 or 13 depending on if you go with Rob (lockwhenlit) or barakandl. I use supercaps on all the old Bally stuff, no reason to use anything else for me.

Jealousy, not to mention yours is playing! Looks great.

Just in cases, I sent you a PM about Robot, I would love to add it to my collection - I don't bore of single ball games and this was one of my top three games at Replay

Nice find. Still hoping to get mine running but I'm at two months and Farfalla is just sitting, like it's in a cacoon phase. How I wish alternate solutions for MPUs were available.

On a separate note, the Super Bonus red insert near the ramp on my game was bowled up (like a bowl), probably from the heat of the lamp below it. The clear and the red paint chipped out a nice sized chip so I have literally one ugly spot on the playfield. Any suggestions on how to handle it? Everywhere else looks good but for whatever reason in this spot the clear and paint just lifted. I've considered just putting mylar over it to keep further damage from occurring.

Michigan is too far away

Why can't Michigan be next door

Congrats on joining the Z-Fam.

Still jealous of running Zacs! Figured out last night that even though I can't get MY mpu to boot, I did get the sound card to run through it's tests so I got to hear Farfalla's voice even if I still haven't flipped the game. Any chance you have a spare working Gen 2 MPU?

And the Clown looks pretty decent, would love to have a nice little collection of Zacs.

I know I'll miss it but I know it will go to good hands (even though I wish I'd kept the Shadow claim) and I'll be able to play it from time to time. too many projects means someone with an already enviable collection will have an even more enviable collection.

Problem with both versions is not the chest, it's the darned face, this looks like Centaur's girlfriend more than the woman on Centaur and that woman should have been on Space Invaders.

Time to stop all this talk before I unload Farfalla from the car and leave swampfire feeling empty and upset...

It's one of those, I'll never find another things (even though it is findable, in the south I was beyond surprise to have found it.) Point is, it is unlikely that I'd come across one. Think I'd have better luck finding a Fathom. Hmmmm, swampfire, how about we redo the deal, Farfalla plus cash = Fathom

Honestly, as much as Farfalla rocks, Robot is the Zacc I really want. Pinball Champ is also good fun.

Oh man, nice pick up, this is ultimately the Zacc I want.

I want an Interflip Dragon!

You're currently viewing posts by Pinsider shimoda.
Click here to go back to viewing the entire thread.