Where did you find that Wolverine? Is there a kit for that change?

Then use the captive ball mod: https://pinside.com/pinball/forum/topic/x-men-le-wolverine-newton-bracket-by-mezelmods

Can't recommend the captive ball enough. Such an improvement to the game.

I think about it too, but I am ambivalent about it. I get why people like it but I tend to be a bit of a purist when it comes to mods that affect the gameplay. I did move the Wolverine over a bit on my LE but could justify it to myself as it was already in that position on the Pro. Taking it out altogether feels equivalent to removing a post on another game to make a shot easier. Plus, I have never hated the Wolverine figure as much as some folks.
That being said, occasionally when I fail to hit Beast cleanly and bounce off the side of Wolvie instead I do feel the urge to rip him off and stomp on him a little.

I highly recommend this mod (or reversion to the original design, technically). Since it is easily reversible (assuming you don't mangle Wolvie's wires or switch), I feel that it is really worth trying out. If you don't like it, you can revert back to the design the game shipped with and sell the kit to someone else. As to why I like it so much, it opens the Beast and Xavier shots, and decreases the number of unintended hits to Wolverine. Overall, I like how it increases my ability to play the game strategically, instead of accidentally starting Wolverine multiball or (repeatedly) missing the Beast orbit shot.

I am sure I would like the mod. I would also like my AC/DC more if I put a rubber ring across the outlanes.

Straw man argument, but you made your point. IMHO, you are missing out on a great improvement to the game (not one that makes it easier).

Hopefully this hasn't been discussed to death already I haven't found anything on it in the forum so far. I was wondering if anyone has been having issues with the Rogue shot on their pro machines. Unless I massage the shot just right the ball either flies out of the ramp and back into the orbits or doesn't register the shot. Any idea's/solutions would be much appreciated, Thanks

I had a similar problem with mine and found that the Nightcrawler lid near the upper right flipper was raised a hair causing air balls and some bounce through the Rogue shot causing it to not register some shots. Adjusting the height of Nightcrawler stopped the air balls and started registering Rogue hits reliably.

Yep. Trying to start or retry Storm or Rogue.....going through Cyclops is the easiest way. It's really a bummer if you have him beat and then start him again when trying to get Storm going.

Good point, but I'm wondering why you don't turn on hero stacking.

Because then the game is a cluttered mess.

I'm not trolling, just curious as to what you mean. I have mine set on stacking and really enjoy it. I like getting several heroes started, start a villain, then start a multball to clean house (well, as much as I can). Also, I like the strategy behind getting to Danger Room -- get heroes all started/completed, then Magneto MB, then play Danger Room. Dark Phoenix is still a dream for my skills.

With stacking off, the game just seems to drag for me.

About to join the club for a 2nd time! Just secured the purchase of a Wolvy LE. I'm going to pick it up tomorrow, can't wait

Congrats. An X-Men LE is an outstanding game. Hope you enjoy it!

6 XMLE in the market right now. Great opportunity if someone is looking to join the club. 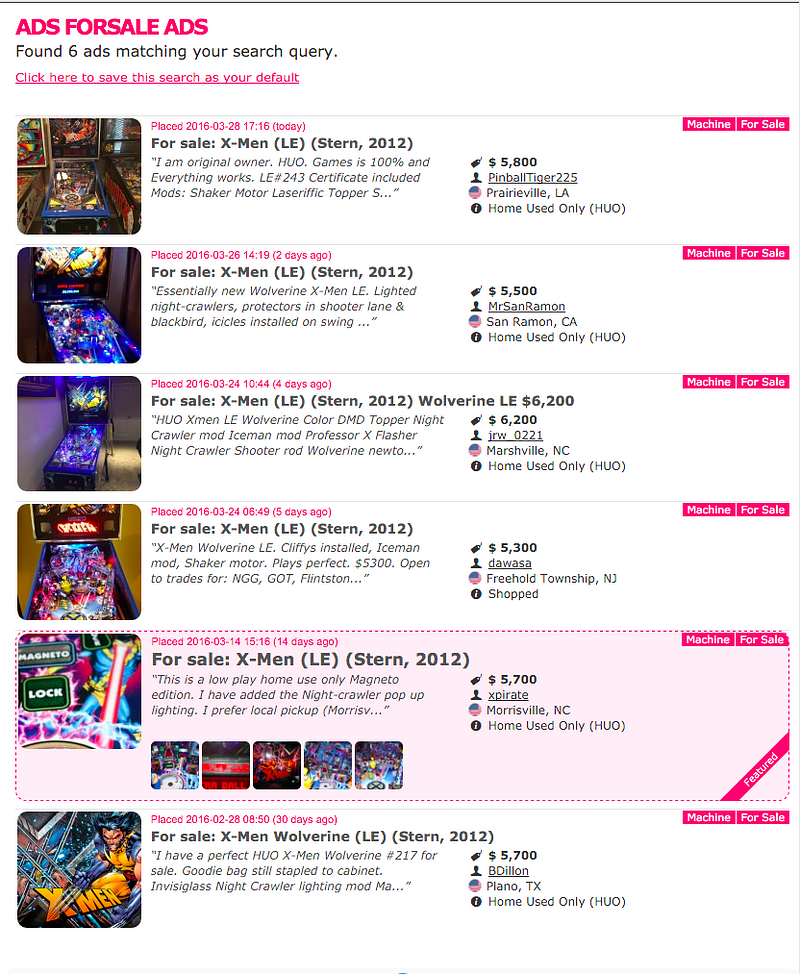 One little gameplay rule I'm not sure of. Sometimes one of the inlane " Launch " inserts flashes like its lit for something other than its normal lane change/light scoop function, what's it flashing for?

That happens when the Iceman mode is running. On the LE, you hit his shot and the ramp (which moves) drops the ball on that flashing inlane (the left most).

Personally, I like hero stacking. But then again, I like to be able to stack modes on most games. I love trying to get several modes started before starting a villain and then top it all off with Wolverine or Magneto multiball. To each, their own.

X-Men for the win! AFM is outta here. I might try Spidey next. Seriously, what is going to beat this machine?? I'm looking at ST and thinking, pfff, not even going to bother. For sale....

It is a seriously awesome and fun game. One of the favorites in my collection. Keep the head to head going, it is fun to see what how it compares in your collection.

Anyone know if there is a rule set posted online anywhere?

Bowen did a tutorial:

It is pretty good and worth the watch.

Tron? It's xmen's mirror image after all...

I have both Tron and Xmen -- love them both. Mirror image layouts, but completely different rules and sounds.

Made it to (and through) Dark Phoenix for the first time. What an amazing and ridiculously fun game! 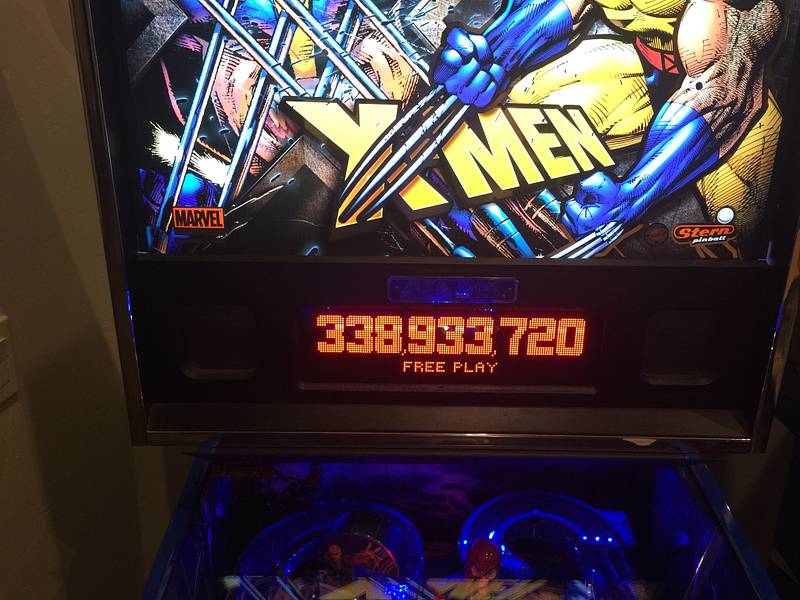 Getting to danger room with hero stacking on (my preference):

Hi Everyone,
I have been working on a LED Hero Insert Mod for X-Men and wanted to share my test version. I plan on reworking some of the colors for each hero, and need to adjust the placement of my LED strip on Cyclops so it doesn't bleed into Phoenix as much. Other than that I think it turned out great. As usual pictures don't do it justice.
I always hated the harsh, inconsistent stock Hero lights, and like my Metallica Insert Mod, I think this really fits the bill.
The mod will ship as a single unit, so all you will have to do is unplug your current lights, slide my Hero Insert Mod in and plug it in to the existing lamp sockets. Super easy and fully reversible. Install should take no more than 15 minutes.
Here is a short video clip in attract mode:
» YouTube video
Price will be roughly $55 shipped.
PM me if you are interested and I can add you to the list.

no, that's true, and not what I wanted to do ...
I was just wondering if the Pro code include part's of the LE's one ...
I'm not sure, but I have in mind that ELi's Ramp Illumination Kit for TRON Pro work's so nice, because TRON Pro Code include LE parts of the Ramp illumination...
so hope that might be the case for X-MEn Pro with the Disco code of the LE
anyway.. negotiating at the moment how a pinduino might help

Eli's ramp kit used a daughter board to intercept game I/O and had its own chip for data processing and controlling the ramp lights. There was no LE code used to make that happen.

I'm happy to help you with the pinduino (I'm the creator of it). Send me a PM.

What is missing from the pro to cause bricking?

Stern made game-specific version of the MPU board. E.g., one version for ACDC prem/LE, one version that worked in Tron LE and Avatar LE, etc. You can see some of them at Marcos: http://www.marcospecialties.com/pinball-parts/ELEC-BOARD-CPU?S_CAT2=STERN

For XMen specifically, you'd need to check the part number for the MPU and see if they are the same or shared with other games.

Thinking about trying to find a pro near me, what are common issues to look out for?

Wear at the scoop and magnets. And being amazed by the great game play.

Has anyone had an issue with Magneto registering hits to the captive ball when there isn't a hit? I can't pin down the exact time or situation where this happens but all of a sudden the last few games it will constantly register hits starting multiball early and all kinds of nonsense.
Thanks

Sounds like an option switch is acting up. Reflow the solder on them, check the plugs, and see if that does the trick. They get shaken a lot as the Magneto ball gate goes up and down which can loosen the plug or cause a cold solder joint.

Added over 4 years ago: Typo: "option switch" should be "opto switch"

I had time this weekend to finally install a Pinduino and addressable LEDs on the ramps of my XMLE:

Also, I updated the Pinduino code for new effects and better integration with gameplay. Code is open source and freely available: https://github.com/elyons/professor_pinball_pinduino_sketches/tree/master/XMen_interactive_ramps

Is there an option to just control the GI and color change the GI on the PRO based on modes, similar to the LE GI color changing?

I've made a few setups with the pinduino to control the GI on games. Here are two from WPT and Tron:

All the code is open source: https://github.com/elyons/professor_pinball_pinduino_sketches

Pretty fun to make and the results are spectacular. I don't have code written for XM pro, but am happy to help write it.

Anyone here been working on colorizing XM for PIN2DMD? Just made one and really like it so far, but still on the learning curve for colorizing.

Really looking for a Walking dead so I (might) get rid of my LE...
https://pinside.com/pinball/market/classifieds/ad/57153

Nice looking game. That is a great deal on my favorite version of XM.

I've played both ways extensively, and prefer hero stacking on. Nothing was worse than accidentally restarting a hero and having to time it out as it totally stopped the flow of the game. 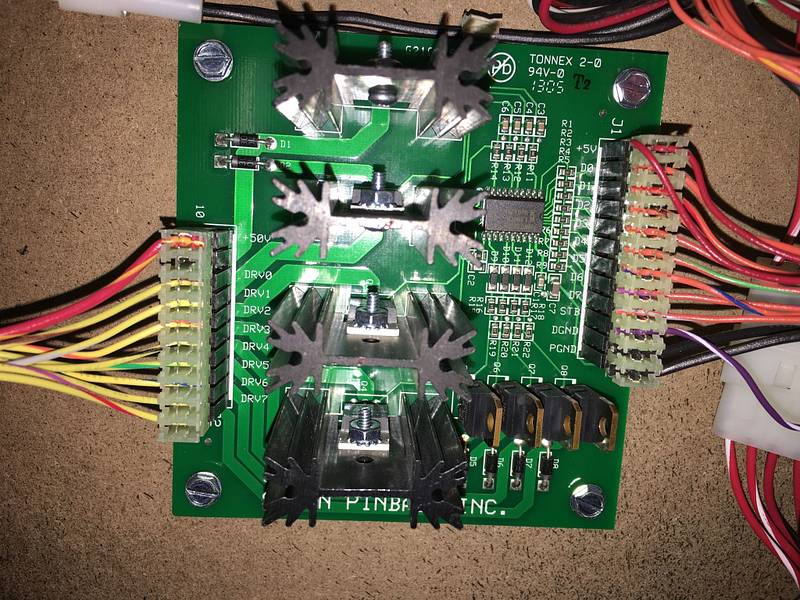 Gandalf37j for the Magneto motor wiring, but it may be helpful to others interested in how it is set up: https://pinside.com/pinball/forum/topic/xmle-disk-motor-wiring

End of stroke lever for a flipper. Important piece that cuts off the high power to a flipper coil when holding the flipper up. Find from which flipper it broke off and replace before playing again. You can burn the coil, short a transistor, etc if not fixed.

So it's from the upper flipper, which doesnt appear to have an EOS switch. Which means that I dont need to replace it. Maybe it is regulated by the lower eos switch. Can anyone confirm?
[quoted image]

I can confirm that the upper right flipper doesn’t have an EOS switch. 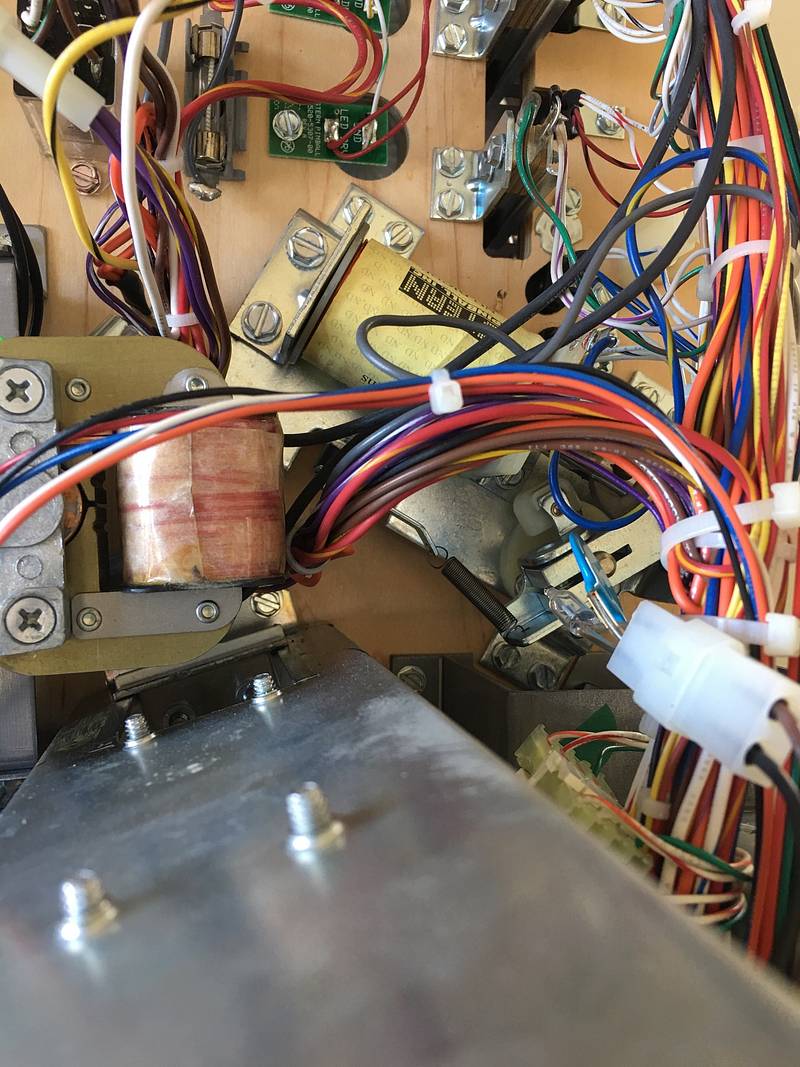