fyi ... wanted to post and so that we don't get this merging into the MMR threads, but we are working on a number of things around a WPC 2.0 platform - extending code and playfield extensions for WPC/WPC95 games.

Attached in the next post are the three slides that I did at the TPF PPS seminar over the weekend, and notably that we are setting up a working relationship with John Popadiuk on doing a 2.0 version of either TOTAN or CV in addition to FH with another party.

We have now the formal framework (as used with the Dutch Pinball for BOP 2.0) for creating variations of games, so now we can move forward with our idea of collaborating with hardware, software, and game designers to get some enhanced games out in the market.

New hardware WPC controller has been announced from FAST Pinball as well as MMR controller which will run various software stacks of the WPC 2.0 games - which can be either emulated 6809 code or run on newer platforms such as Python, etc. 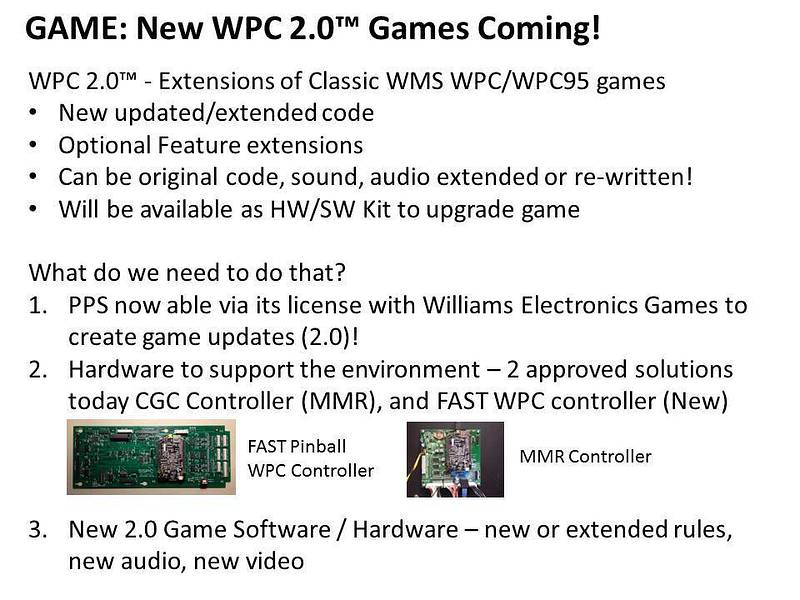 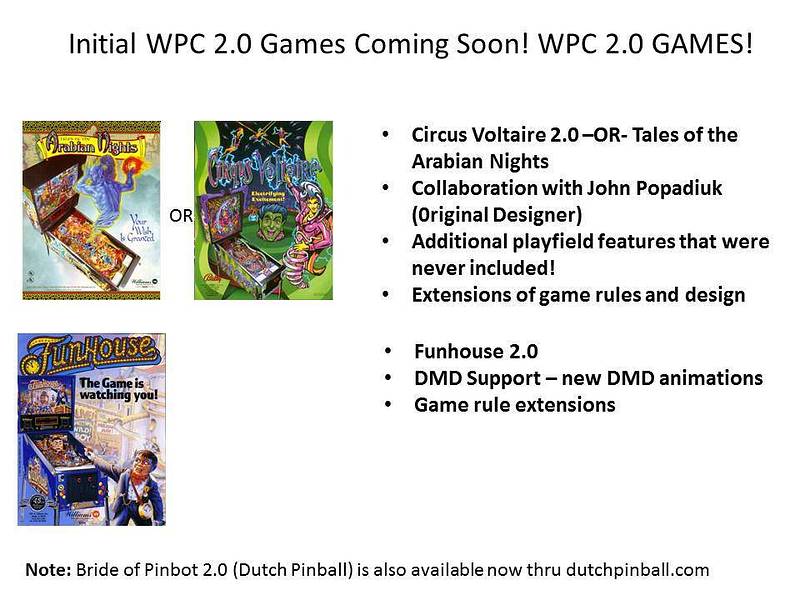 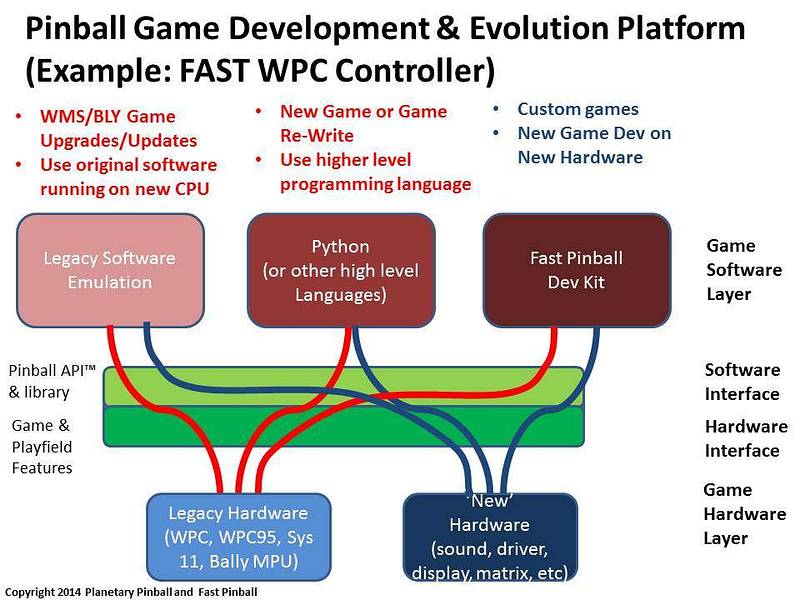 Let me get this out of the way: TOTAN needs a code update way more than CV does!

Yeah that's sweet!
How much of a change will these make in game play on say CV or Totan?
Like bop 2.0 changes?

Wow.. now THIS is a project I am excited about!

Very cool project! This could really bring new life to a lot of already great games.

I've been patiently waiting over 10 years for a MM code update! lol

oh my lord. now this is a bombshell!

How sweet would it be if they could get Ed Boon to record some new rudy callouts...

just the tip of the iceberg, of course.

I looks like the Fast Pinball controller also uses the BeagleBone Black as its CPU. Are the two systems basically the same environment with different footprint / off-board connections?

both MMR and FAST use beaglebone black ... MMR in it's current incarnation has an I/O bus structure for the new hardware setup as opposed to the classic WPC95 boards. The FAST controller specifically is setup to interface to existing WPC/WPC95 boards (power driver, sound, dmd (or lcd), etc). But the upper level software can be leveraged between the two ...

Also, for example with popadiuk, we are discussing a number of playfield features/extensions that he had for the games that got pulled out. We 'could' include those as playfield mods (similar to the saw blade on TOM), and insure that the software and rules are there as the John had envisioned.

This is great news Rick. What a way to breath new life into some great playing tables.

So does this mean that funhouse will be a dmd kit or just a rules upgrade?

Funhouse 2.0 would be a DMD kit, as well as some rules upgrade, and possibly some playfield extensions ...

What do you mean by "playfield extensions" Rick? It's hard to imagine what else you would add to Funhouse.

Funhouse 2.0 would be a DMD kit, as well as some rules upgrade, and possibly some playfield extensions ...
rick

Rudy animations? That would be cool!

The easy examples are the ones that got pulled out of the existing games (3rd magnet on TZ, rotating sawblade on TOM, etc) but could also be new features that either fit into the existing games either with or without rule extensions.

Hopefully we can get one or more designers to divulge some things that 'never were' as they are the best ones with the list of specific features that got removed ... but then do we want to share now?

Exciting news. Thanks! Also, I agree that TOTAN would benefit most from a software upgrade. That would be great!

This is pretty cool. Is this going to be at all opened up for home developers to try to make some existing additions (even if only distribution point is via pps) without total code rewrites?

Ver cool. I like how in one move Rick basically cratered the A list market, MM prices plunged, AFM and CC and MB all took hits, people wondered how it would work out. Next move? Raise the prices on CV, TOTAN and FH.

All we need now is a RICK WHERE IS THE NEW CODE? thread!

This is insanely cool.

Omg I wanted a Funhouse before, now I reallly need one

This is a great service to the pinball community, way cool!

This is better than the straight-up remakes. Good direction to go with the enhancements.

Great news indeed opening up channels. Curious as to why this hasn't streamed through the P-ROC setup though I wonder if it has to do with maintaining a singular cpu setup rather than whatever is desired.

Hmm new income for JPOP. Makes me wonder about Alice...

Hmm new income for JPOP. Makes me wonder about Alice...

Does Alice become a PPS machine?

If Alice was under PPS I would send my money now. Love JPOP but need to know its under a tighter reign with more backing .
Back on topic : Rick is singlehandedly making this the best pinball year yet!

Wow, I'm more excited about this! Please oh please make pinbot's getting to the sun something worth going for!

Does Alice become a PPS machine?

no, this is only about existing WMS/BLY games and extending them ... no new games allowed, other than of course this hardware can certainly run new games. Fast Pinball guys are interested in all sorts of games running on their hardware, but that is kindof separate.

As if I wasn't excited enough already....

We are just trying at PPS to leverage our own little corner of the pinball world of BLY/WMS stuff and extend, expand, remake, use, remake parts, create merchandise, etc, to to the best of what people want ... but we are more than happy to help others create their dreams using some of this stuff ...

no, this is only about existing WMS/BLY games and extending them ... no new games allowed, other than of course this hardware can certainly run new games. Fast Pinball guys are interested in all sorts of games running on their hardware, but that is kindof separate.
rick

That's alright. The future is so bright right now with new pins, updates, parts, etc. Thanks for all that you are doing.

Let's not fight over which machine gets the 2.0 version (TOTAN or CV). Just create a 2.0 version for both.

I bought Funhouse on Friday. Talk about a strategic accident!

Shaker kits and support for many games would be welcome.

It was great to finally share publicly what we have been working so hard at! The Texas Pinball Festival was an awesome experience and it was fun showing what we are doing and hearing about all the great ideas everyone has for new pinball. Big thanks to everyone who helped us out! Thanks Kevin for introducing us to David, David for loaning us his Dracula so we could demo the FAST Pinball WPC Controller and our FAST Pin Protocol live for visitors to the booth.

The opportunity to work with PPS very exciting and to work with designers like John Popadiuk is a big reason why we got into making our pinball platform. We were always intrigued by what features may have been cut due to time/budget/technology limitations and how great it would be to work with the original designers whenever possible to bring them to life.

We have worked very hard to develop a platform designed for streamline pinball design and programming, the development of new custom games and the eventual commercial release.

We have been hard at work on our hardware and have recently rebranded our efforts (you may have seen some of our previous efforts under the Skill Shot Pinball label), so our website will be getting updated over the next couple days. Please feel free to post any additional questions and I'll answer them as best as I can.

PS: Huge thank you you to Brandon Bailey brendanbailey.net for our new logo design and to Rich Lindt thisoldgame.com for producing our new t-sheets and banners!

This thread just gave me a giant semi...can't wait to see what you guys do!!!

That's alright. The future is so bright right now with new pins, updates, parts, etc. Thanks for all that you are doing.
Frank

We are very interested in hearing from people who are working on games. We have worked hard to develop a platform that provides a direct path from custom pinball game development and beyond to a commercial release. The FAST Pin Protocol is intended to make pinball programming and game design appealing to game designers who may have thought that pinball game design was just not possible. With our hardware you can program your game in any language you like. (My first demo was done using javascript in a browser using a serial browser plug-in!)

Anyone interested in discussing early access to the hardware for their custom game already in development should send me a PM.

For sure. More than a few people who experienced our FAST Pinball WPC Controller hardware in action in the booth asked when they can do the same for System 11 games. It will happen. We will have a lot more to show at the NW Pinball Show in June. nwpinballshow.com

So FAST is basically a P-ROC alternative that does not require an additional computer? Is there a place I can read more about what FAST offers?

So FAST is basically a P-ROC alternative that does not require an additional computer? Is there a place I can read more about what FAST offers?

fastpinball.com is our website. We are working on filling it up with content. Should be richer tomorrow evening.

Here is a shot of the FAST Pinball WPC Controller for those who did not see it at the show. 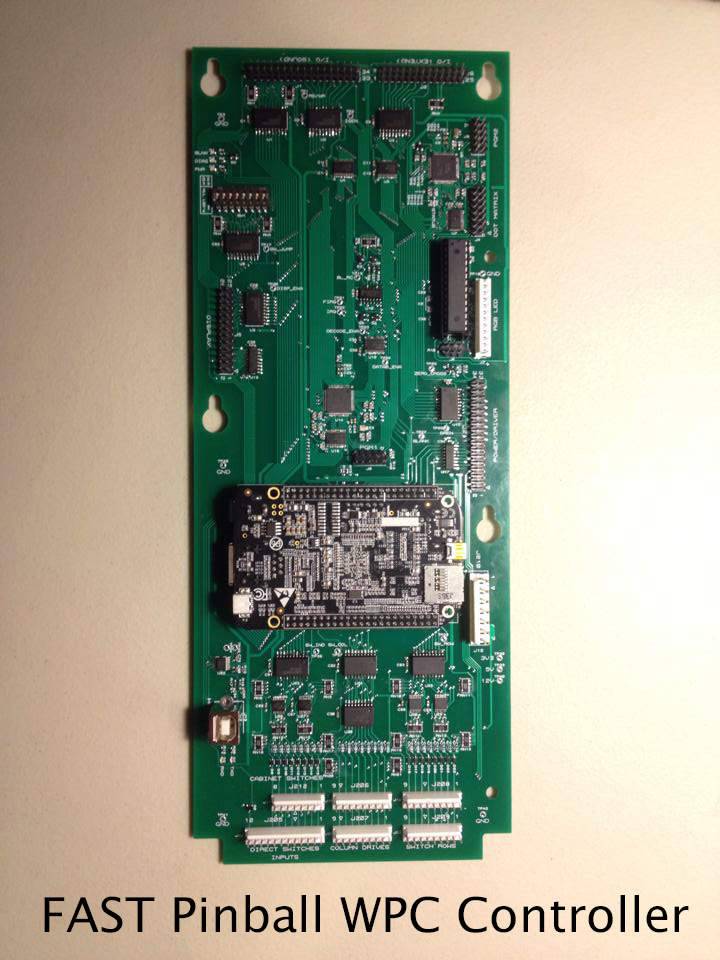 I have a question. If you got a totan at home. And this software 2.0 is out.

What do i need to do to make it playable on my totan?

Or do i need to do/buy more?

What do i need to do to make it playable on my totan?

That is a great question. I'd love to know exactly what I will need to do to be able to play these upgrades. I'd love to see additions to both TOTAN and CV. That said, jpop doesn't need any additional distractions getting RAZA completed.

This news about Rudy almost makes me sad I sold my sweet clearcoated Funhouse a few months ago...almost.

It is good news that PPS and Fastpin are now making replacement WPC CPU boards. As so many have become roached from bad hacks and alkaline damage over the years. It seems like there will be a market for them.