Would a WW2 pin work?

"In a pinball-style game called Bombers Over England, German children scored 100 points by destroying London or the British submarine base at Scapa Flow, Scotland. Players also could win 100 points for hitting Calais, France (which was still French-controlled), and lower scores for British cities such as Aberdeen (60), Birmingham (50) and Liverpool (40). They lost points by hitting Nazi-controlled cities in Europe, such as Brussels and Amsterdam."

. And I can't think of a single successful war-themed pinball machine since they started using flippers.

I was thinking the buildup and progress towards a goal would lend itself to good gameplay. I mean we won? Right? I think I think it could be done w/o getting too specific or negative

Axis and Allies might work better than a specific war although you can retain the same participants...

The pilot is actually George Bush. Practicing for a carrier landing.

It's a good concept. Some guys in Canada are working on a pin with such a theme.
Aaron
FAST Pinball

Thanks Aaron... That would be us

It's funny to read this thread and see everyone going through the same dilemmas and concepts that we did.
We have a pretty good concept for the rule-set and how to integrate a tiny bit of history into something that is really just more objective based and not too heavy.
Lots of missions, ascending in rank, code-breaking and so on... but very light on specific names and places... and definitely no Nazis or swastika (iron cross vs. allies as was previously mentioned).

We also wanted to involve all of the armed forces so there were some neat toys integrated including a Lancaster bomber that you load for multiball, rotating Sherman tank that alters your shot trajectory and even an aircraft carrier that you can 'land' on

I don't have any images of the design or whitewood on my phone but I'm sure the guys wouldn't mind me sharing a few sneak peaks tomorrow. We got to a preliminary whitewood stage before deciding to shelve the idea for a bit and tackle something a little more basic first.

I still think it's a strong theme.
Our hope was to create something that was engaging and immersive (and fun to play) while still paying homage to the men and women who served and continue to do so. We had no illusions that this would be anything but an adult geared theme, but we were hopeful we could strike the necessary balance.

Axis and Allies might work better than a specific war...

Just do Catch-22. Still controversial, but probably less so, and there's plenty of content that could be adapted to pinball. Glorious Loyalty Oath Crusade mode where you have to hit the loyalty oath target before making a shot, Save Snowden mode where you get points for hitting the wrong (unlit) shots but hitting the lit shot ends the mode, Great Big Siege Of Bologna mode where you hit a vari-target to move the bomb line, Major Major's Office toy (hit the ball through the door and it gets kicked out the window), Live Forever wizard mode.

Yeah, I guess the game does represent WWII, I was thinking more in the terms of having both sides and eliminating the era/war. But wasn't thinking straight when posting... That being said, maybe we go the Stratego route!

Why not use one or all of the WWII 60's comics like Sgt Rock, G.I. Combat or even Weird War...give it a comedy touch...you get all the excitement of WWII or what ever you want to call it and not offend anyone...BTW, Kelly's Hero's would also be a cool theme...break into the bank with a Tiger I. 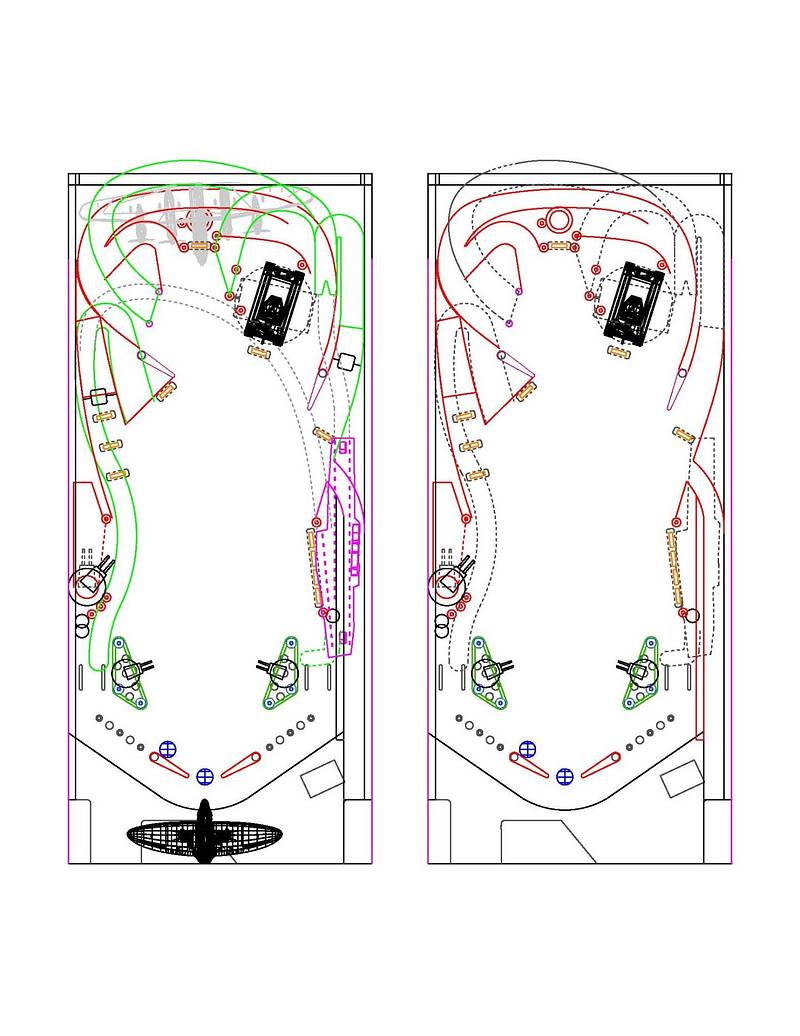 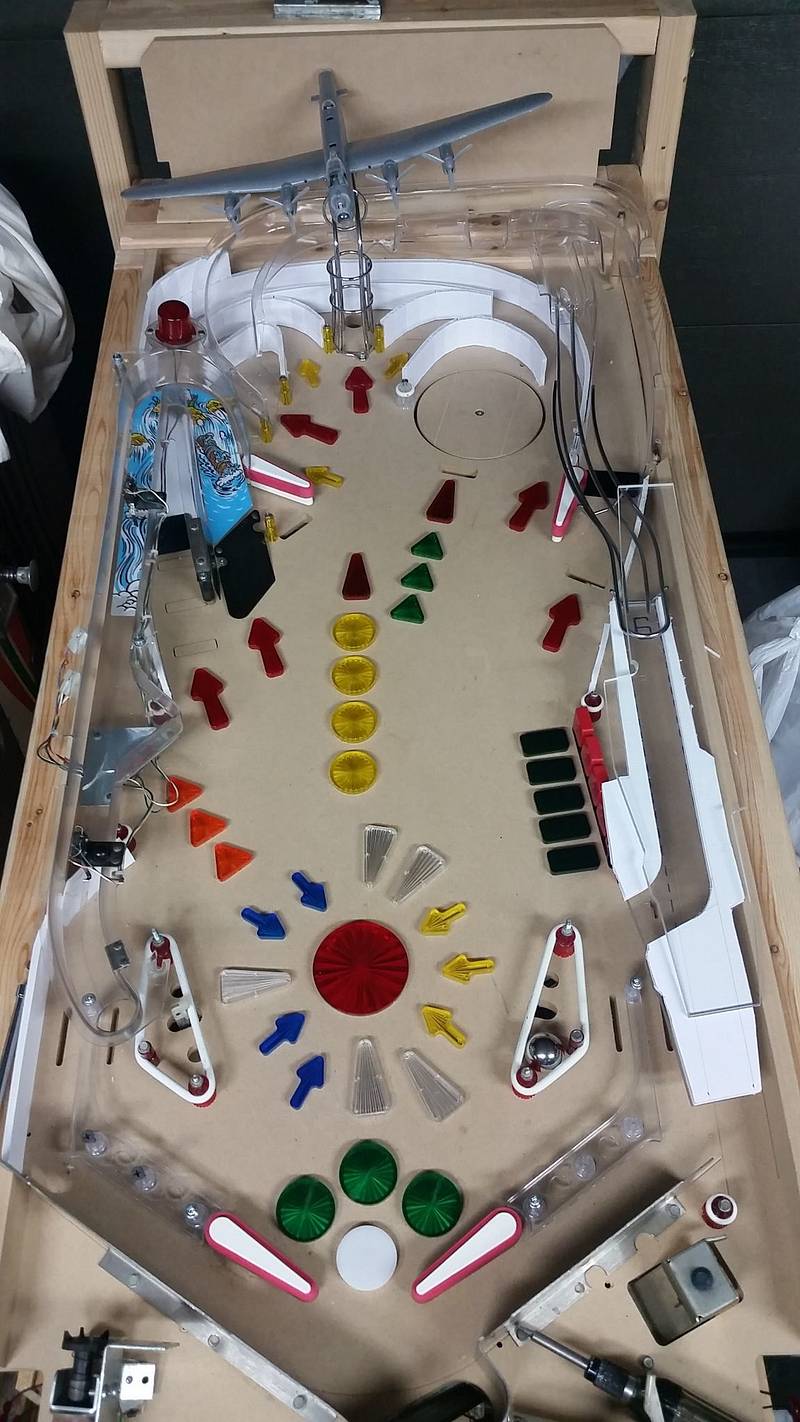 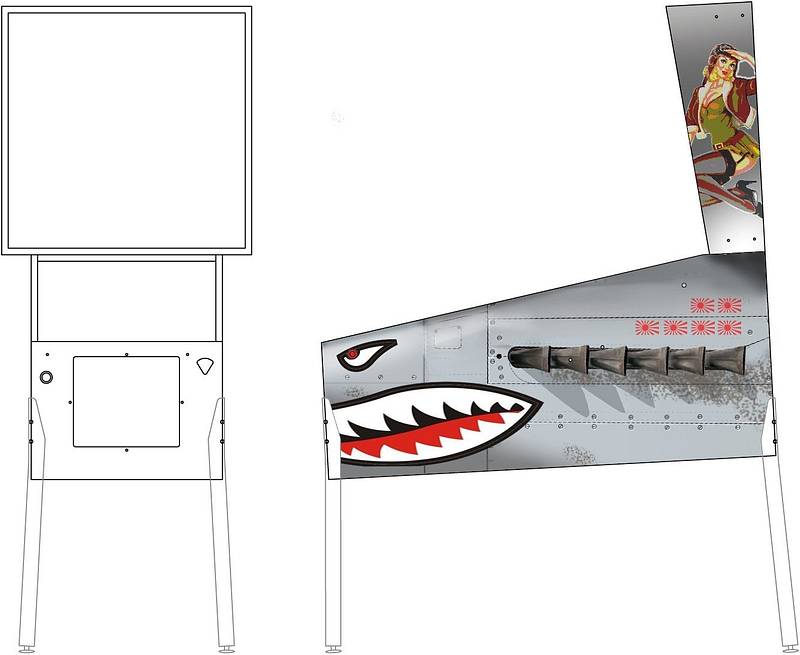 I think someone should make "Islam: The Pinball".
Now that would take more guts to make then some ordinary "Kill the nazis" pin hohohoh

Racist commentary is not cool. 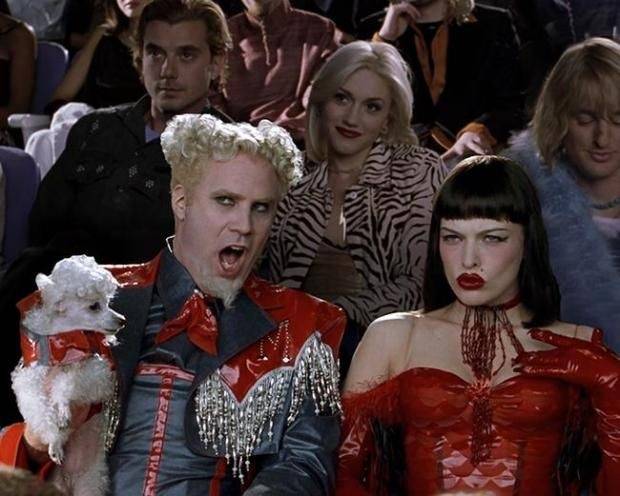 I'd rather have "Weekend Pass at the USO" and win tickets to dance with all the pretty girls.

It sure is! The model was just meant to sit on top of a hidden wireform/VUK assembly to lock balls.

I can't find my pics, but we also managed to create a 3D printed sherman tank that sits on that disc to the right. The 4 wheels inside the tank tread would be targets, hitting the targets during a certain mode, would rotate the tank and expose a shot to a scoop between the treads. Think of it like a modified TAF bookcase idea... except the scoop would be hidden under the tank and not an exposed shot like TAF's vault.

If youre looking for any other model kits for your build- I probably have over 100 at home dating back to the 60's......mostly smaller scale unbuilt kits. Planes, tanks, ships, etc..

Funny enough, that was a thought. We considered getting the balls up to the bomber a different way (via upper ramp maybe) and then slowly releasing them down like bombs into the saucer. We had it all planned out complete with an air-raid sound byte to signal multiball and then huge shaker motor effects as each ball dropped into the saucer and was kicked out to the right upper flipper for a possible jackpot shot back into the ramp and bomber bay. Not unlike WH2O multiball.

I don't recall why I changed the way it worked. Maybe too many multiballs? Maybe the saucer would get killed. Anyway, something to think about.
At one point you'd be able to lock balls at the bomber, under the tank and land them on the aircraft carrier at the right ramp return (similar to LOTR sword).
I guess that would've made the game feel very much like BSD. Not a bad thing I suppose.

Here's a shot of our prototype tank toy. Yiu can see where the balls would pass under it once rotated. 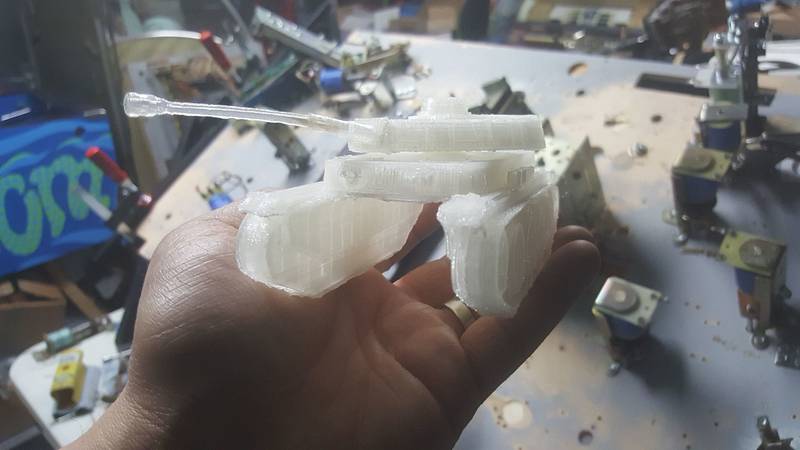 Many nations lost on so many levels. So if you were a part one of those countries you wouldn't play it?
"I mean we won? Right?" One of the most ridiculous comments I've ever read on pinside.

Hi John,
I send you some pm about the TWD BG Mod you ordered from me many days ago but unfortunately I never got a response from you. But I see you are still alive on pinside. What's about the mod? Everything ok? Then please do the payment.

At this point, I'm more interested in pondering the eternal questions: Did Musollini ever play Skee Ball? Did Eichmann ever relax with a nice game of lawn darts?

Lost one more that will never know aboot.

wtf.. looks similiar to the "motörhead" pinball playfield design i have thought of..
at last the bomber...

You could also use a LCA (Landing Craft Assault) to store balls for a multiball. Perfect design!

looks cool Drano & team and glad it was finally revealed a little, love the cabinet art and the shots look cool - time for starting a dedicated thread guys. Also like the direction on rules.

I will throw out the website I put together a few years ago for my custom pin:

The site is extremely outdated, especially the build log. The theme is based around the 8th Air Force in the ETO. It isn't done and the cabinet mocks me when I go to my workshop, but I am still very committed to finishing it some day. Since I started it (and life got in the way) many customs have come out and those builders have done remarkable things. I am encouraged by their success.

I find it interesting as I never thought the theme would be offensive to anyone. I have an Uncle who was KIA over England in 1944. I have done extensive research into him, the crash, and have information from both sides of the conflict along with family artifacts. My theme was always going to be generic and was never going to focus on any past of the family story. That is something that should be shared with people on a more personal level. And if someone plays the game and asked for my inspiration I would absolutely share it, but not on the table itself. It is going to be more an homage to the job we asked our soldiers to do and those that did it. I maintain there is a way to base a game on this period of history. But then again it isn't possible to please everyone so those folks don't need to play it.

Sure. It's purely cosmetic but there's no reason that couldn't be done.

One of my favorite mode ideas (aside from the ENIGMA feature and having to crack the enemy's code) was the idea of an air raid mode. The bomber would sort of animate with sound and lights and there would be timed "bomb drops" that would shut off certain parts of the game... making it go dark.

The player's job would be to make the appropriate shots before the bombs fell. Essentially, to defend the playfield. The more bombs that drop, the fewer shots remain to defend. It would be a timed mode I suppose.

So much great material to work with!
I'm getting excited about this project again

Definitely a joke! Between all the Call of Duty games and Battlefield games released, they might as well combine them both into one big murder game.