I've decided to start in on the voluminous task of rating all the machines I (can remember) playing, and am trying to calibrate my ranking before starting to rank everything (otherwise, you know, the tendency is to rate everything above average.)

Which brings me to the question: what is the worst pinball game you've ever played? Because you need to have a bottom as well as a top machine. Picking a top one is not a big problem, other than trying to pick among many favorites.

Assume it's in working condition and has no defects other than the ones created by its designers and manufacturers. You may adjust by era. Think: bad rules, weird layout, boring theme, poor artwork, design errors leading to poor gameplay, and in general a complete lack of fun.

I don't come here often, but when I do, I see this same thread every time.

I was sick of Harley Davidson on the second ball of the first game...

Another vote for the horrible Bally El Toro.

Super Mario Bros Mushroom World, which was so fascinatingly bad I wound up playing it multiple times at the NWPAS.

Worst modern game ive played has to be Avengers LE with dishonorable mention of Rob Zombie. I dont play much older pins but Silverball mania stands out but it was a really poor example of the game.

prob one of the best games for the buck! you been drinking?

Orbitor 1. Neat for about 30 seconds, then gets really boring.

Eight Ball Champ. After Eight Ball and Eight Ball Deluxe, I thought it would be really good. Not so great. I probably ought to adjust the review that I left for it.

I'm going to throw my hat in the ring with Stargate.

I just couldn't figure out what to shoot!

Has to be Street Fighter 2. There's already a huge thread on how bad it is. And this is the only game that I refuse to play ever again. My parents owned a bar and grill from the mid 80s to late 90s. Our route operator always brought us great pinball machines. Then one day he comes and switched out our current game with this. I played it a couple times and was like.....WTF??? I think it earned about $3 in a month. Only good use for these games are a re-theme or parts for real games or thrown off the roof.

For the money, Cactus Canyon.

Another vote for Shaq and El Toro, BUT they ARE still pinball machines so "worst" simply means "least awesome" (as in "worst" variety of chocolate or "ugliest" Aston Martin)!

Striker Xtreme.
Soccer at it´s worst.
Was here for less than a week.

SF2, worst of the worst.

Any baseball themed pinball machine. I hate baseball. The boring season(baseball season) ends in about 7 weeks!

Worse game ever? That's easy, one I don't have. I am taking donations though.

Go figure, those are turds for sure.

prob one of the best games for the buck! you been drinking?

Heard that a lot before I bought one. Also heard how well it would sit next to my Demo Man (which actually is great value for the money). I hated JD from 10 minutes after it was on legs until it left this house.

Some of the early Gottlieb SS machines are pretty horrible. Lackluster game play, awful sounds. I had a Solar Ride that some asked if they could buy from me... I couldn't get rid of it fast enough.

Maybe the Worst.....or Maybe the Best? 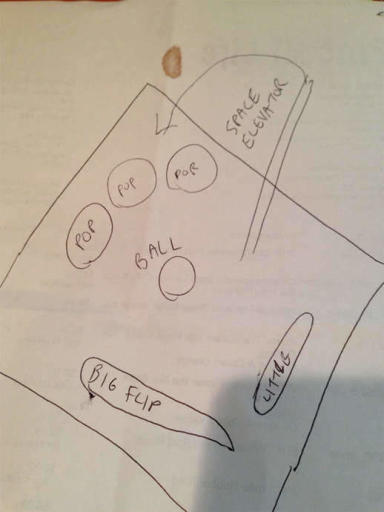 Without repeating some solid candidates above:
Ready, Aim, Fire, Gold Wings, and Millionaire.

If you have all 3 of these, your lineup needs a natural disaster.

Let's be honest... worst machine/biggest rip off ever might just be Batman 66

Shadow! And Alec Baldwin the worst.

Judge Dredd is my favorite game I think you need to give it another try.

A game that I have had for many years and couldn't see ever selling.

Orbitor for me. Cool idea that just did not work.