I recently helped a friend with a problem he was having on a 1974 Williams “Star Pool”. The problem was that the machine was playing a 4-player game, no matter how many credits the game was fed – press the credit button 1 time, 4-player game….press the credit button twice, 4-player game, etc. In the process of figuring out the problem, I had to try to understand the way Williams machines from the ‘70s go from one player to the next, and from one ball to the next. I’m more familiar with Gottlieb machines, and they do this function in a very different way, so it took me a while to understand how this works on Williams machines. I haven’t seen a ton of Bally schematics, but from the ones I've seen, it looks like they change players/balls pretty much the same way Williams does – they just draw it a bit differently.

I thought I’d put a thread together with drawings to help other new-ish folks out there get their heads wrapped around how this circuit works. I’ve seen a few threads recently involving this circuit, so I know not everyone out there understands it. While this circuit is simpler than Gottlieb’s equivalent, it can still be confusing the first time through. I know there are old hands out there who already know this stuff backward and forward, but for those of us new to these concepts, or less familiar with Williams machines, I thought this explanation might be helpful. Or maybe I just miss Rolf’s drawings…

And many thanks to HowardR who coached me through it the first time a few weeks ago.

A few things are important to note before we start, and are not necessarily obvious from the schematic:

1. The Coin Unit is a stepper that has 2 coils – one moves it forward one position (each time you press the credit button), the other coil moves it backward one position. During gameplay, the coin unit DOES NOT move.

2. The Player Unit DOES rotate during gameplay. The Williams Player Unit is very different from a Gottlieb Player Unit. It has 2 coils – one of which steps the unit forward 1 position for each pulse through 4 possible positions (Players 1 through 4). The other coil resets the unit back to position 1 (Player 1) with one pulse. Gottlieb P.U.’s only have one coil that continually steps the unit forward as many times as needed to get to the next player/next ball…a continuous stepper. Obviously, both circuits/mechanisms work, but just be aware of the difference.

Hopefully drawings will help clarify what’s going on when you start a 1-player game and a multi-player game. The first drawing is the relevant part of the schematic set for a 1-player game, first ball in the shooter lane, score motor in home position. (It’s usually how schematics are drawn, at least in the ‘70s.) The only difference in the following 3 drawings is the position of the connections in the Player Unit and Coin Unit: 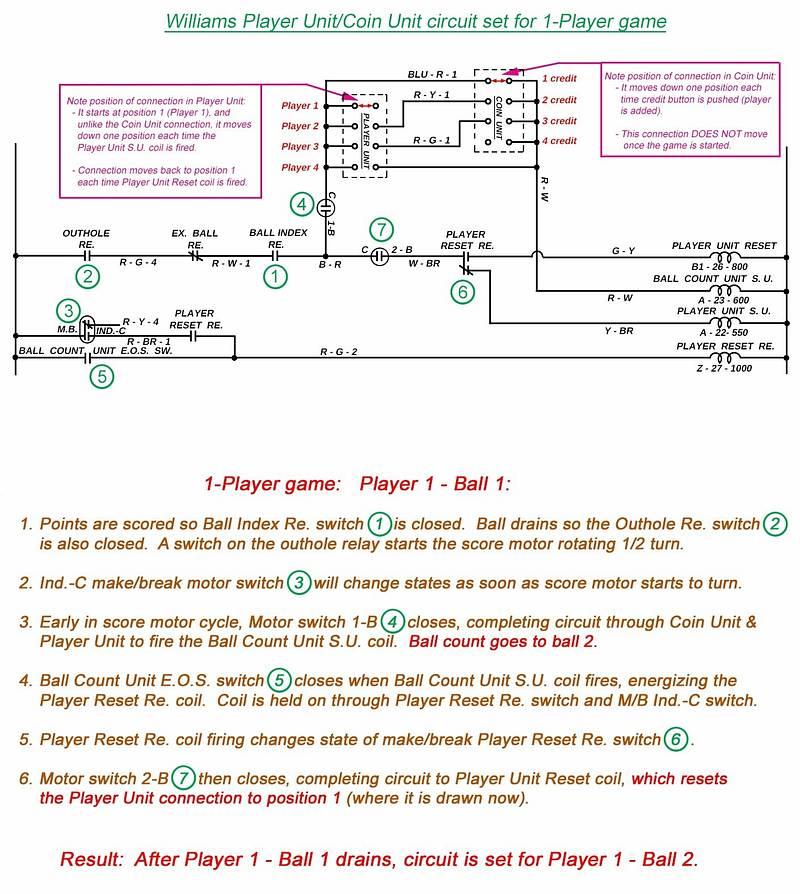 This next drawing is how things should look when you’re ready to start a 2-player game, 1st player ready to play their 1st ball: 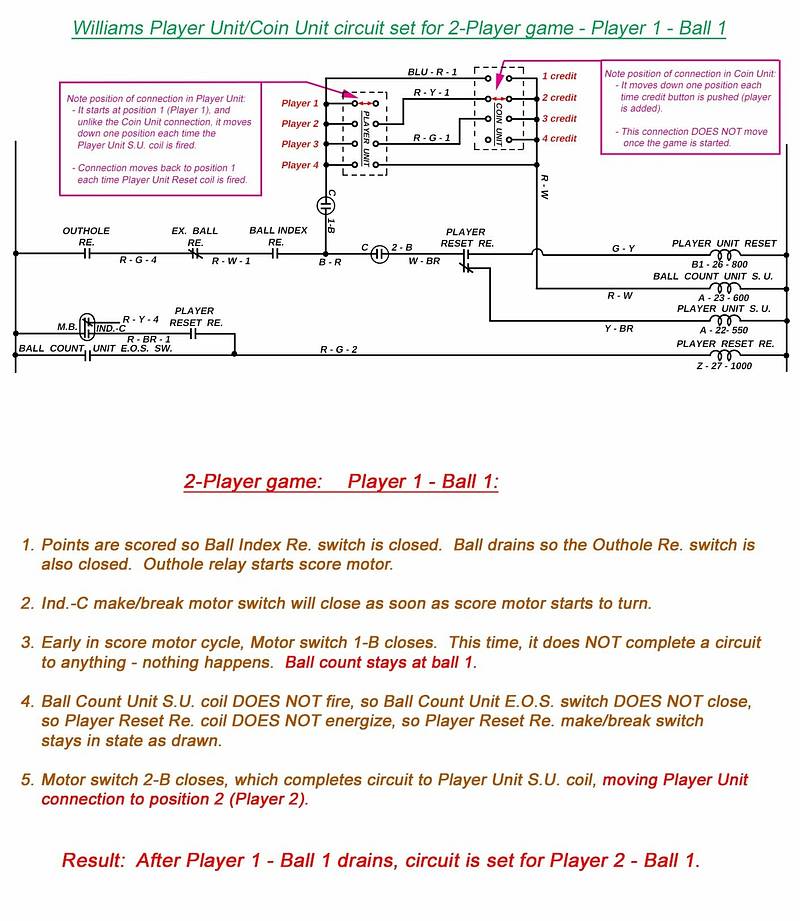 This final drawing is how things look in a 2-player game, the 2nd player ready to play their 1st ball: 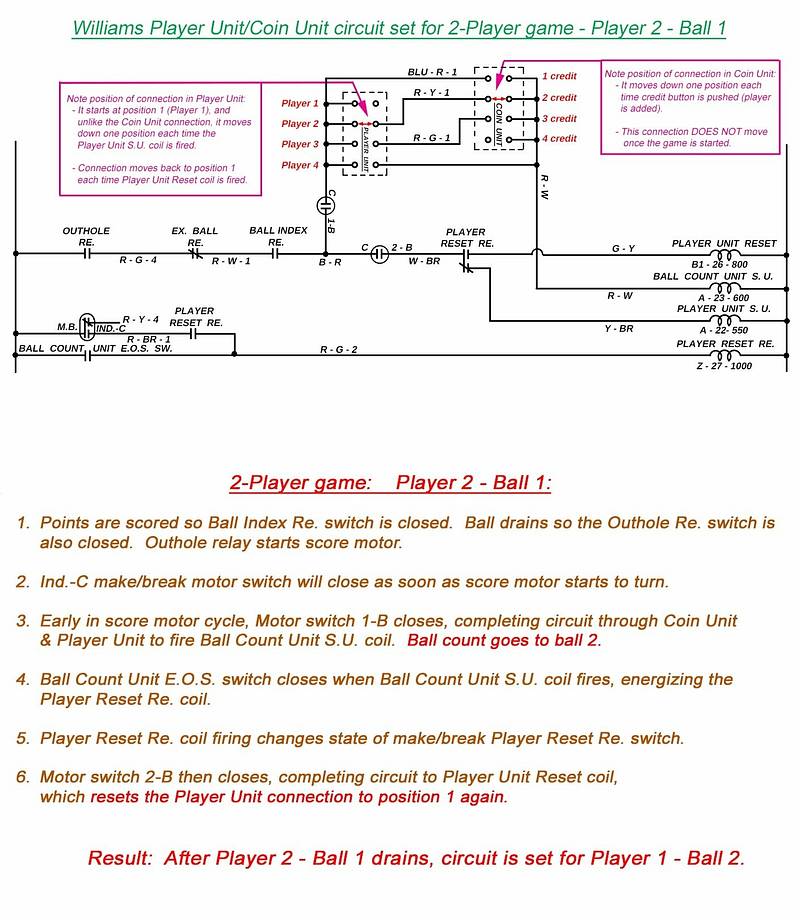 3 and 4 player games work just like the 2-player game – you just have to picture the connector on the Coin Unit moved to position 3 or 4 (where it stays during gameplay). Then the circuit works the same way.

I know this write-up is long, but hopefully it will save a few folks some time and head-scratching in the future. The problem on my friend’s machine wound up being a bad connection on one of the contacts on the rotating “spider” on the Coin Unit – a path through the Coin Unit was never completed, which made it behave just like a 4-player game was in progress. Once I understood how the circuit was supposed to work, it was much easier to pinpoint the problem.

Nice write up of a circuit that comes up often here. Well done.

Thanks Mark - I likes drawing me some pictures...

You know, I actually got the re-drawn schematic for that game on the IPDB site if you don't already have it.

They are quite different. I prefer the williams/bally setup. Gottlieb combined the ball count and player unit into one stepper and then made it a critical part of reset.

Hi bonzo - I agree, the Gottlieb system is tougher to work your way through. Wonder why Gottlieb did it that way? Cost?

In both cases, clever guys, those designers!

Cost seems like a likely motivator for Gottlieb's Player Unit design. Compare the two designs for player up and ball count functions:

Gottlieb:
- one non resetting step unit with one solenoid
- no reset torsion spring
- a few plastic cams
- a generic switch stack on each cam

Bally/Williams:
- two resetting step units with two solenoids each
- torsion springs on both steppers
- no cams
- wiper fingers and a contact board on each stepper

The plastic cams were probably cheaper than the three extra solenoids and two springs. And the switch stacks may have been easier to manufacture and assemble than contact boards and wiper fingers.

The Gottlieb Player Unit certainly added some complexity but they weren't necessarily designing for the long term maintainability of the games. And the sound and light show of a resetting '70s Gottlieb multi player game is something to behold.