Hey everyone, after fixing several problems, I finally ran into something i cant figure out, so I humbly request your help...

DID IT EVER WORK IN YOUR POSSESSION?
I played on this machine when I was a kid, then it got stored in a garage for 25 years or so.
Thanks to the ton of information available on this site, and thanks to a video series on youtube restoring a Williams 1975 Pat Hand (so nearly identical im almost certain it was the next machine on their assembly line) i managed to get it working again... For 1,5days...

WHERE DID THE GAME COME FROM?
See previous post. My dad restored it (and made a few adjustments here and there, it seems).
2 modifications come to mind:
- the entire coin mechanism on the door is missing, and he added a button which lets you play with more then 1 player (by using the 25c relay, dont understand exactly how, but it worked)
The most relevant modification is what I call my “canary”. Its an EG 455 modified light bulb, hich starts burning whenever something is wrong. I'm pretty sure the little sucker saved quite a few coils and fuses already. Anyone have any idea what it is? (see picture)
Its wired over the hold circuit of the lock relay and a NC switch on the transformator.

WHAT WAS THE LAST SERVICE YOU PERFORMED?
As it was working properly, i vacuumed the bottom mechanical panel (I know, i could have misaligned pretty much every switch on there :/),
and was looking for the wires that should go to the chimes (chimes are there, but not connected).
I also replaced a few broken lightbulbs in the back panel, but i think I played a few games after doing that.
But the problem still exists after unplugging both the back panel and the playfield, so we can rule out the last 2 actions as possible causes, right?

BLOWN FUSES:
I took out and tested all the fuses in the fuse block, they're of the right type and ok.
Is it correct to assume the game simply wouldnt work if one of the fuses was blown?

SMELL
It smells just as I remember

OBVIOUS PAST WORK PERFORMED:
The canary job
Bybassing the chimes (maybe factory done)
the addition of an extra “start” button (for +1 players, for 1 player games the standard one works just fine
rewiring on the Play opion – extra ball/replay jones plug in the backboard. But not relevant as I unplugged it.

DO YOU HAVE A VOLT/MULTI-METER:
Yes, I think I understand enough to use it for testing in an EM pinball machine
I measured all the coils for the right resistance
Used it to check the fuses
Used it to locate the wire at the 10-100 and 1000 point relay that connects to the chimes
I am using it to troubleshoot the current problem.

CAN YOU SOLDER?
I have the necessary equipment, but its been probably 15 years or so since I used it.

DO YOU HAVE THE SCHEMATIC?
Yes, although I might not understand everything, I just love studying all the connections.
And I hope it helped me narrow down possible causes of my current problem.

YOUR LOCATION?
I live in Belgium

PICTURES
Are added for clarification, more can be added as needed . Any way to add them at a specific location in my post instead of just adding them as attachments?

DESCRIPTION of the ACTUAL PROBLEM and tests run
I press the left flipper, Lock Relay energises, lights go on. But so does my canary.

After 23 seconds my canary has had enough and the lock relay disengages and everything dies. I immidiately pressed the left flipper again and the same thing happens after 11 seconds.

Then I unplugged the playfield and backboard to rule out any issues with the lights, and the problem remained.

Checked the schematics for the Lock relay, and found it got energised by either the left flipper, a cam on the score motor or the 5cent relay (I cant find the 5 cent realy, so im assuming it was on the door somewhere) (see attached image)

I prevented the different switches on the lock relay to close, and concluded the hold relay caused my canary to start singing.

Now, when I use my meter to do a continuity test on the 2 connectors on the hold switc (when its open, see pic) , it beeps... that shouldnt happen, right?

Anyway, I've been stuck for a while now, and i cant wait to see my kids play on it ... So any help would be greatly appreciated. I really feel like its a minor stupid thing that im missing as not much is happing yet in the game, but im just not seeing it. 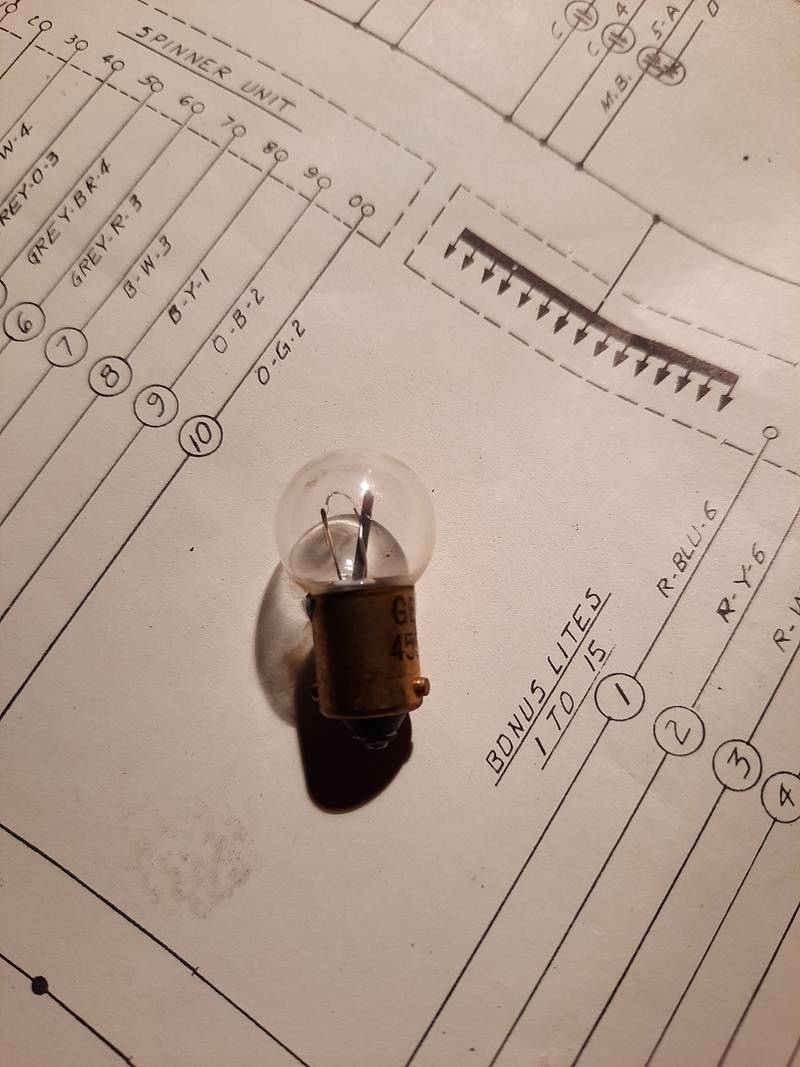 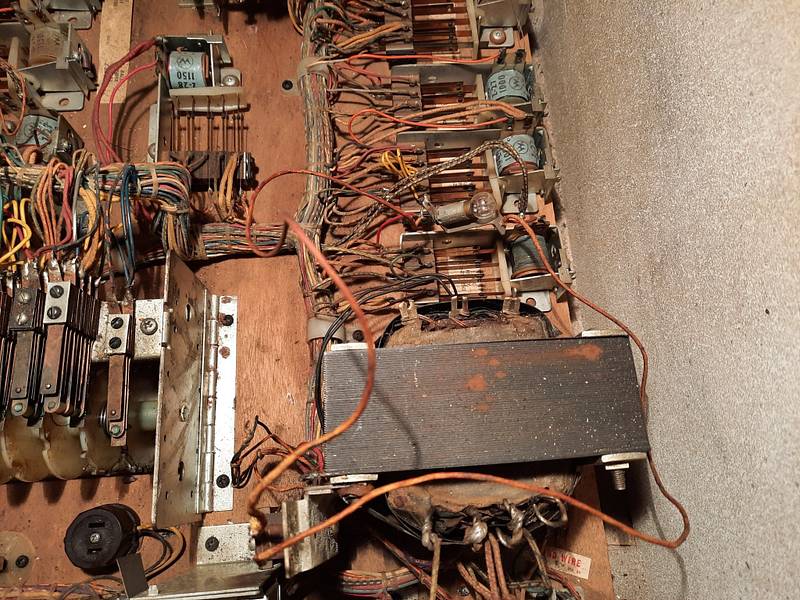 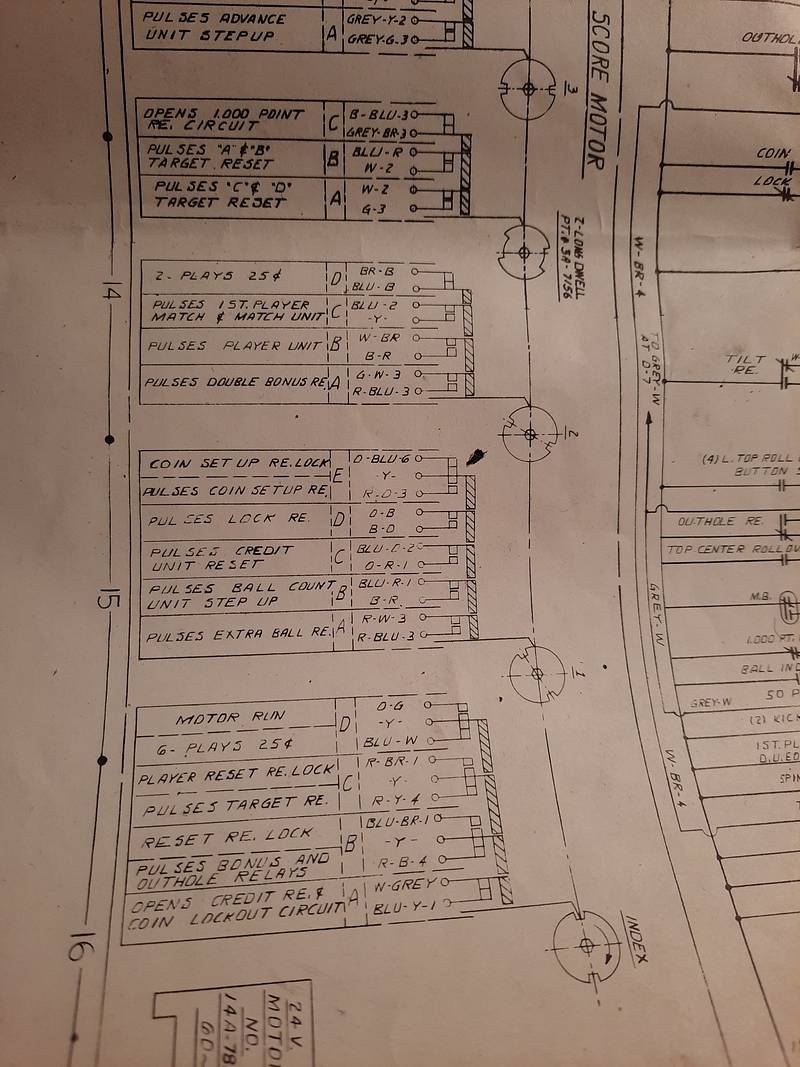 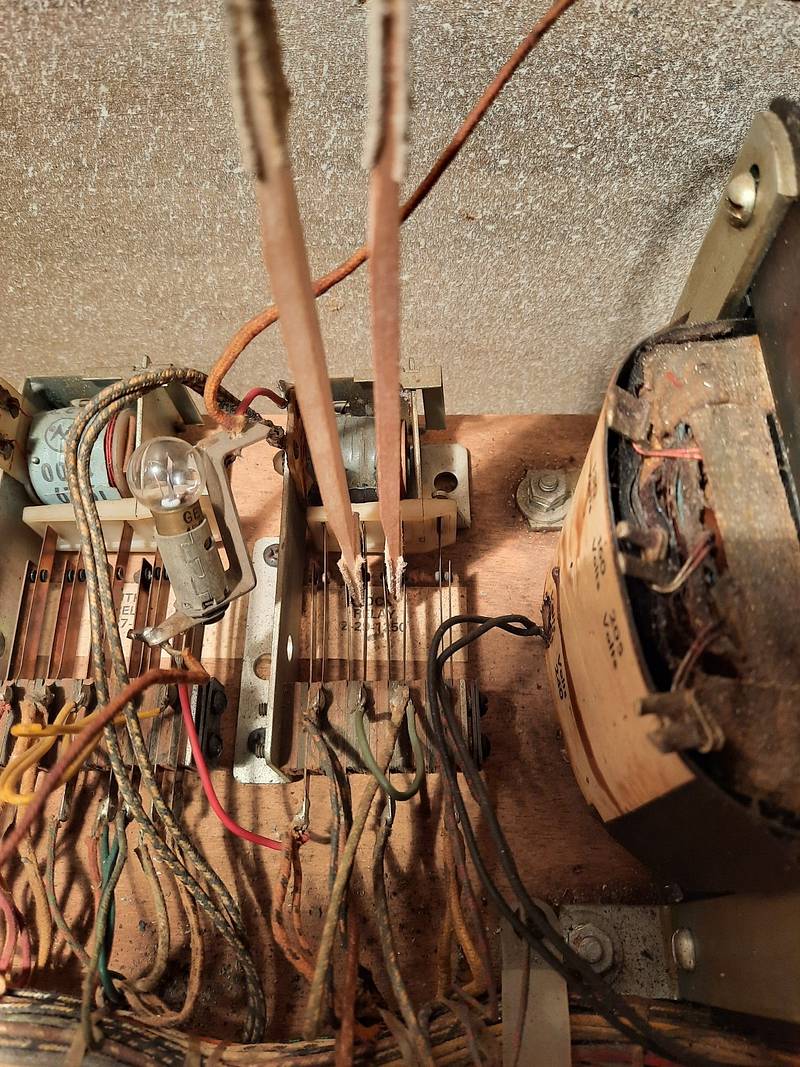 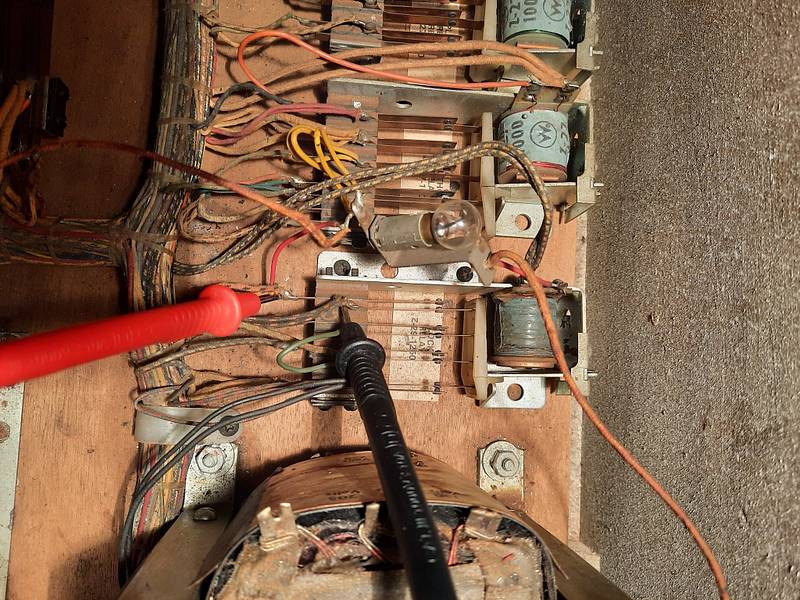 Now, when I use my meter to do a continuity test on the 2 connectors on the hold switc (when its open, see pic) , it beeps... that shouldnt happen, right?

Your meter is probably telling you that there is continuity not through the switch you clipped on to, but through the other path which goes through the transformer. What resistance do you measure across the switch?

The most relevant modification is what I call my “canary”. Its an EG 455 modified light bulb, hich starts burning whenever something is wrong. I'm pretty sure the little sucker saved quite a few coils and fuses already. Anyone have any idea what it is? (see picture)
Its wired over the hold circuit of the lock relay and a NC switch on the transformator.

Can you describe the circuit that uses the 455 bulb or provide a simple schematic?

Thanks! I've been reading here quite a lot (lurking in the shadows, learning slow but steady, usually finding the answer im looking for) , and I must say I absolutely love the positive spirit that this place has!

Your meter is probably telling you that there is continuity not through the switch you clipped on to, but through the other path which goes through the transformer. What resistance do you measure across the switch?

0 , I'll try to be as specific as I can in my schematic of the other path.

Can you describe the circuit that uses the 455 bulb or provide a simple schematic?

I will try to describe/ make a schematic of the hold circuit and the 'canary' in the added picture tomorrow.

Thanks for your help! 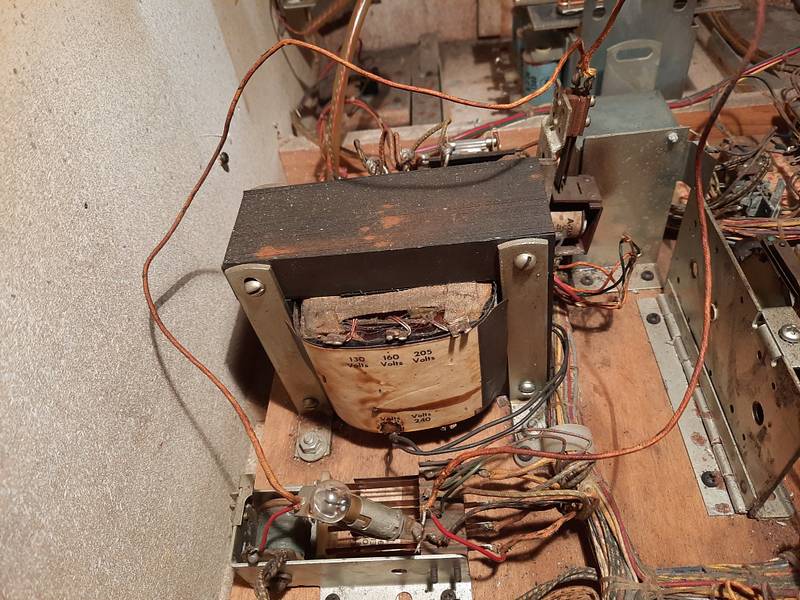 EDIT: I think i did something wrong when measuring resistance over the hold switch: now it reads 20.4

See schematic in attachment.
I probably made it less clear now...

In my defence: this is my first schematic ever, and I had to use paint!

The circuit of the light bulb was easy... the other connections not so much.

But I think the light bulb is doing its job: aka telling me there is something wrong elsewhere...

I'm sorry I cant be of more help in pinpointing the exact problem right now, but I'd be happy to anwer any more questions you might have.

How can I put a video in here? That might make things clearer

Testing if I can post a link to a video

Edit: that seems to work.

By unplugging everything and only pressing the left flipper, and making sure the 2 other switches on the lock relay don't connect when energised, i think I narrowed the problem down to the hold circuit for the lock relay, but I could be totally wrong

I located the switch on the score motor.
When I measure resistance over that switch, I get 21.2 (assuming I'm looking at the right connections)

Final Results are in:

So I fumbled around with the mystery switch a bit and it dropped down to .3,

and my canary doesnt light up anymore!
I'm going to connect everything and see if it works again!

Succes!!
Thank you for putting me on the right track!

On to the chimes!

I'm glad you got it sorted out. I'm intrigued by the Canary circuit though. I think I've transcribed it correctly here: 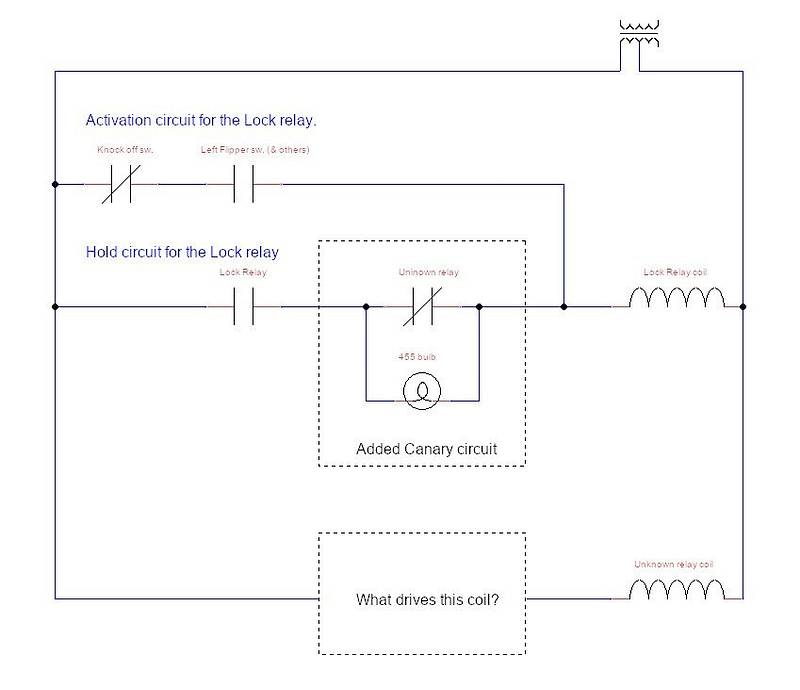 CanaryCircuit (resized).jpg
As drawn the added Normally Closed switch and bulb have no effect on the Lock relay hold circuit. When the unknown, added relay at the bottom fires it opens the switch which sends the Lock relay current through the bulb to light it.

What I don't understand is what drives the added relay coil? Where do its wires go?

Schematics look ok (and a lot clearer then my attempt

You're right about the mystery relay: I have a new problem with my player unit reset coil not energising long enough, and a 100point relay that gets stuck, which gave me an opportunity to make a vid of the canary in action (video starts while adding point to the score reel after the ball went out of play):

It also resembles this:
4.2.4 Delay Relay
Bally used a special relay in the 1970s to provide a time delay circuit. The delay relay uses a #455 flasher lamp in the lock-in circuit to generate the time delay. The lamp is in series with the normally open lock-in switch. When the relay is energized, the lock-in switch closes and the lamp lights. When the lamp filament heats up and the lamp flashes off for the first time, the open circuit releases the relay.

The flasher lamp is required for correct operation of the delay relay. Using a standard lamp will result in the relay locking on once it is energized. If the lamp is missing or burned out the relay will fail to lock-in, resulting in the relay energizing momentarily and no time delay. Note that the 6.5V lamp is powered by the 50V coil voltage in this circuit, so the delay is shorter than the normal flash delay. If the delay is too short or too long, the Bally game manual recommends experimenting with different #455 lamps until the desired delay time is achieved.

The picture to the right shows the delay relay from the "Over The Top" buzzer circuit on a 1976 Bally "Hokus Pokus" game. The #455 lamp is pointed out in red.
(ref.: https://pinwiki.com/wiki/index.php?title=EM_Repair#Delay_Relay)

It looks like the mystery coil is connected to the jonesplug meant for the chimes (see picture), but I will investigate further after solving my new problems 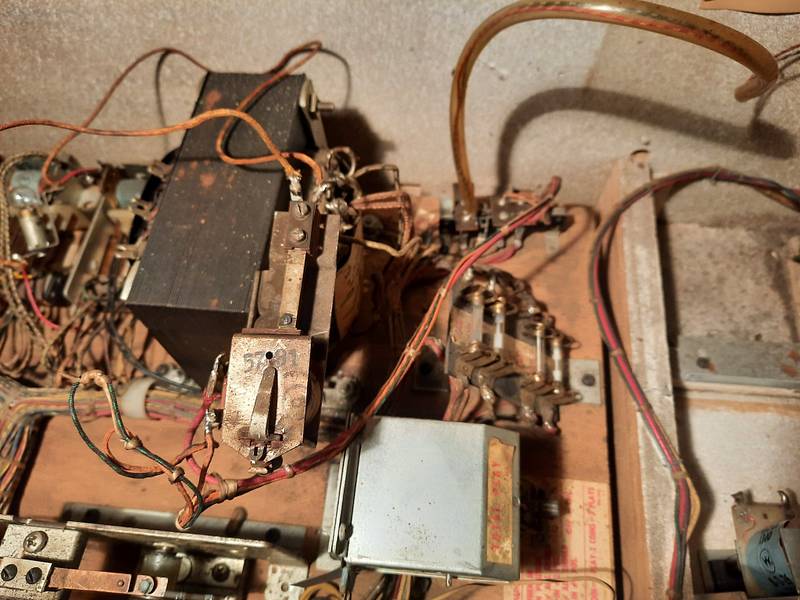 You can bypass the lock coil. I did it on mine. Also check the switch stack on the advance unit.

If it's off and not adjusted right, a game won't start and no coils wil fire.

Don't rest the playfield on the advance unit it will possibly throw offf the bonus lights alignment.
My beat to hell star pool is currently under a retheme project. 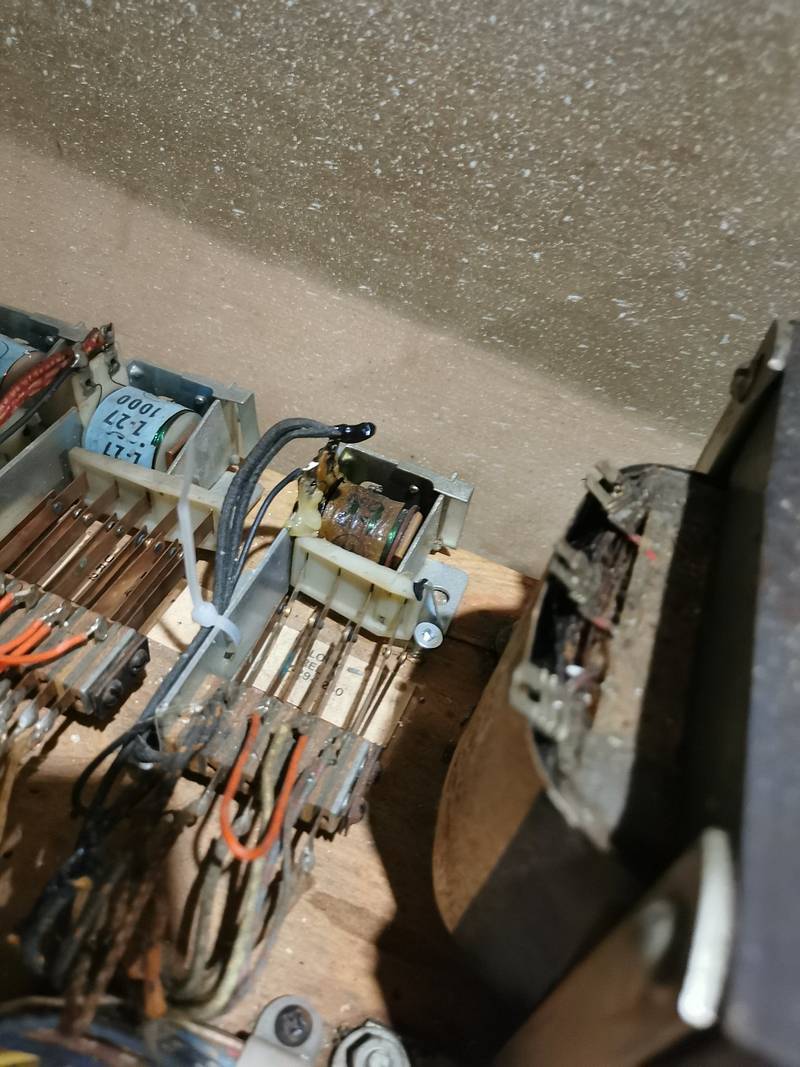 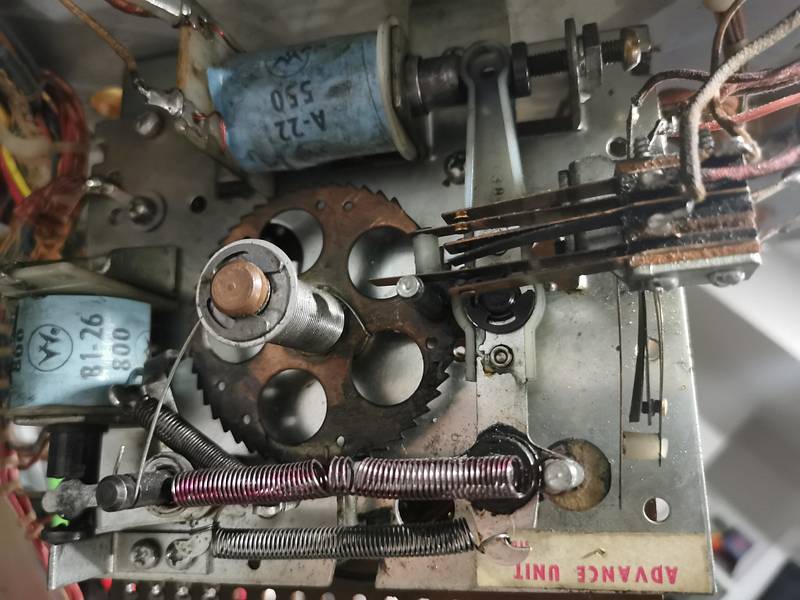 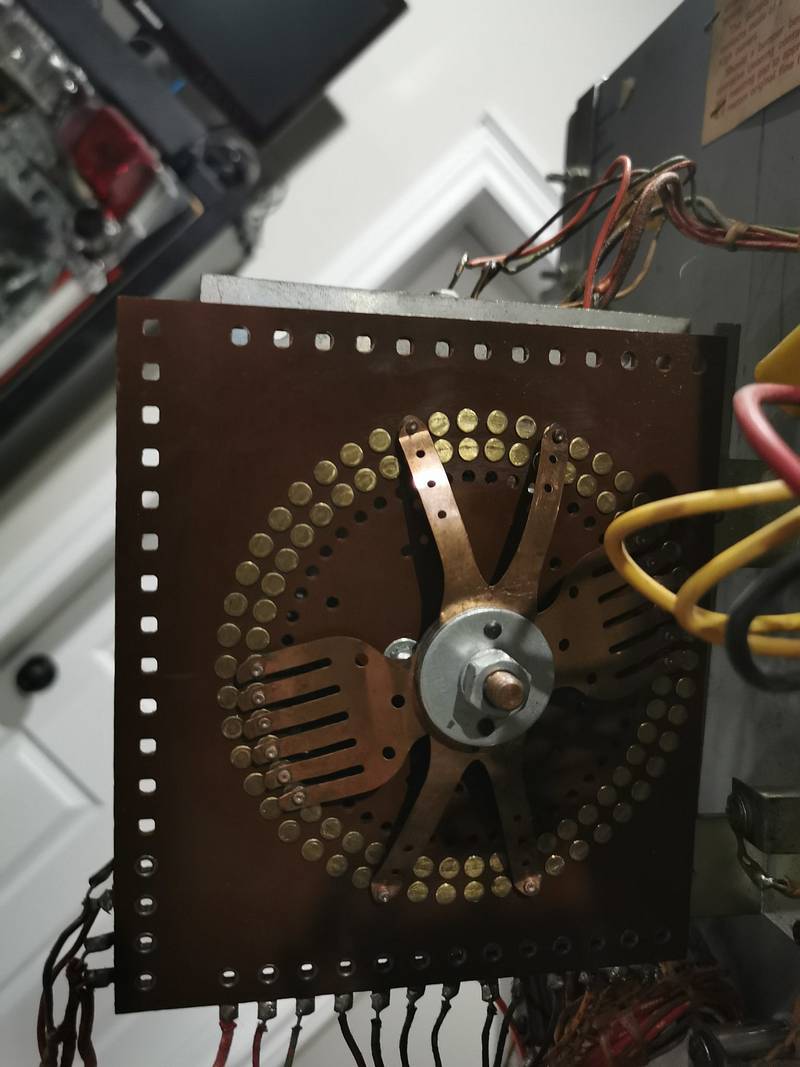 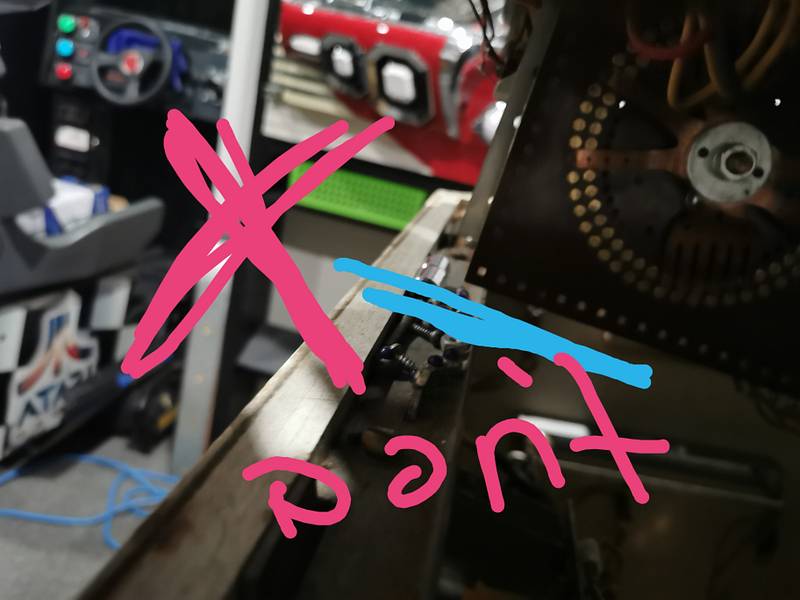