The Pacific Pinball Museum in Alameda CA has probably one of the most vast EM collections,
with tons of early 60s WMS EMs, Along with tons of Woodrails and GTB and BLY EMs)
That is in part due to the fact that 60s WMS pins were my favorite to acquire and collect and play.
At one time I had about 75 of the 170 WMS EMs from 1960-1978 eras
and I have since donated the vast majority of my collection to the PPM.
Including all the WMS reverse wedgehead pins ever produced.
And what games that I did not donate, of WMS EMs from 1960-78 eras,
they acquired the remaining (about 90% of WMS EM pins) thru other donors.
Another great place to play WMS EMs from the 60s & 70s is at Matt Cristiano's Pinball Ranch in San Benito county CA
where he has a bunch, most of those from the Sam Harvey acquired collection.

You now have me wanting to compare the games linked in this topic with the games listed for the Pacific Museum here on Pinside. Wish I had a visit to the West Coast coming up soon.

Hazmat, nice addition to your Williams collection! Was it a local or quasi local find?
Looks like you have your work cut out for you with some playfield touchup artistry.
Enjoy.

It was local in Brooklyn Park, MD.

I’ve never owned a pin with the metal flippers, but I’ve played some. I like the look, and I assume they’re more durable than plastic. I would think that chipping and cracking are eliminated. 8 Ball is at the top of my wishlist, so maybe I’ll have metal flippers some day.

And from 1962 on there were generally 2 rubber-rings fitted on each flipper. It's not only on the flyer, this was real. 2 rubber-rings look much better than one, also it protected the flipper from getting broken. It's neither original nor better looking when people fit their 2-inch-flippers with just 1 rubber. It also was the case that most operators fitted the pre-1962-machines with 2 rubbers to protect the flipper from getting broken. No idea where this "new" trend comes from to return to just one rubber.

It's not a "new" trend. That's how they were in the 60s. The 60s were when I got started playing pinball so I played a ton of games from all manufacturers, all two inch flippers, and they were all single rubber flippers. Maybe the operators somewhere did it, but they did not come from the factory with two rubbers on each flipper. If they did then the ops of all the games I played removed them.

I asked Steve Young this very question one time. His statement was that one rubber was factory. Might be the reason there is only one groove for the rubber on the flipper. In addition, I've run one rubber on all my two inch games forever and I've never broken one flipper bat doing that.

My own Apollo has chrome bats yet a customers one I'm overhauling has red ones. Chrome looks nicer to me though.

My Apollo has white flippers. Chrome would be great on this game though, so may have to see if I can find a pair.

Doubling the rubbers on the round top 2" flippers was done to accommodate the smaller 1 1/16" pinball. It isn't to keep the flipper from breaking, but to have the flipper strike the ball closer to the center. When flippers first appeared, the standard pinball was 1 1/8" in diameter. A smaller ball was soon used, and in order to compensate, an additional rubber ring was routinely installed. This was permanently corrected with the introduction of the flat top 2" flipper.
I always double rubber the round top 2" flippers.

Plus double rubbers give you just the tiniest bit of extra reach. Which is nice on some games.

I own a Williams Oh Boy! And it has red metal flipper bats. 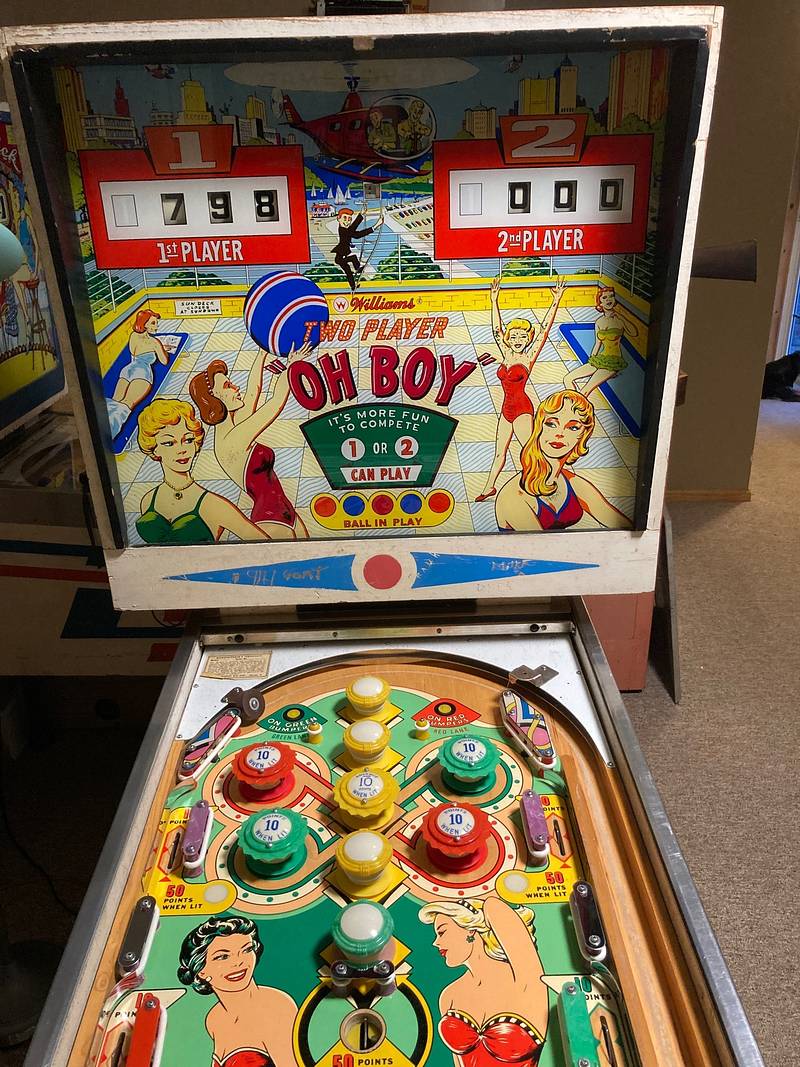 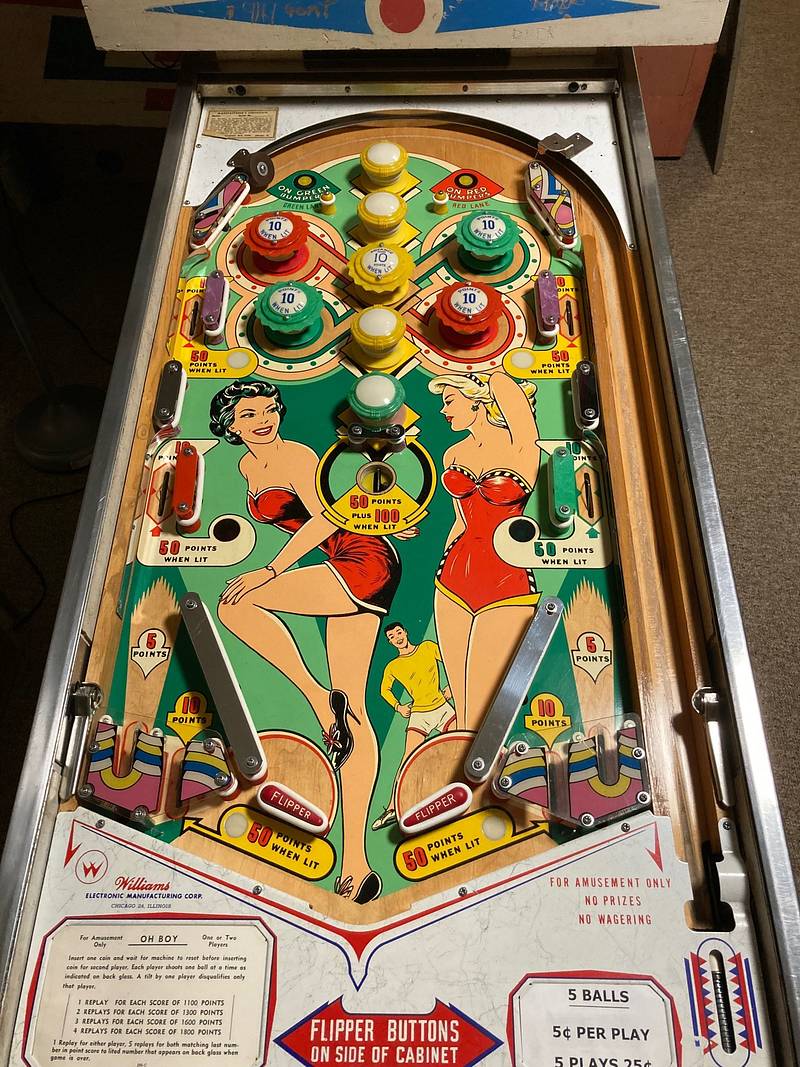 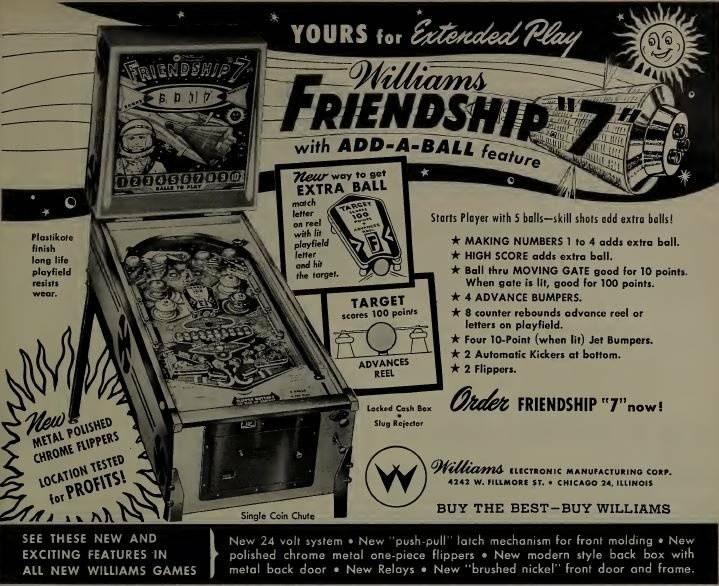 Note the references to chrome flippers, part of a bundle of cabinet improvements.

I thought I was the only one with an Oh Boy! One of the best 2 player games EVER.

My Shangri La has the chrome-sters! 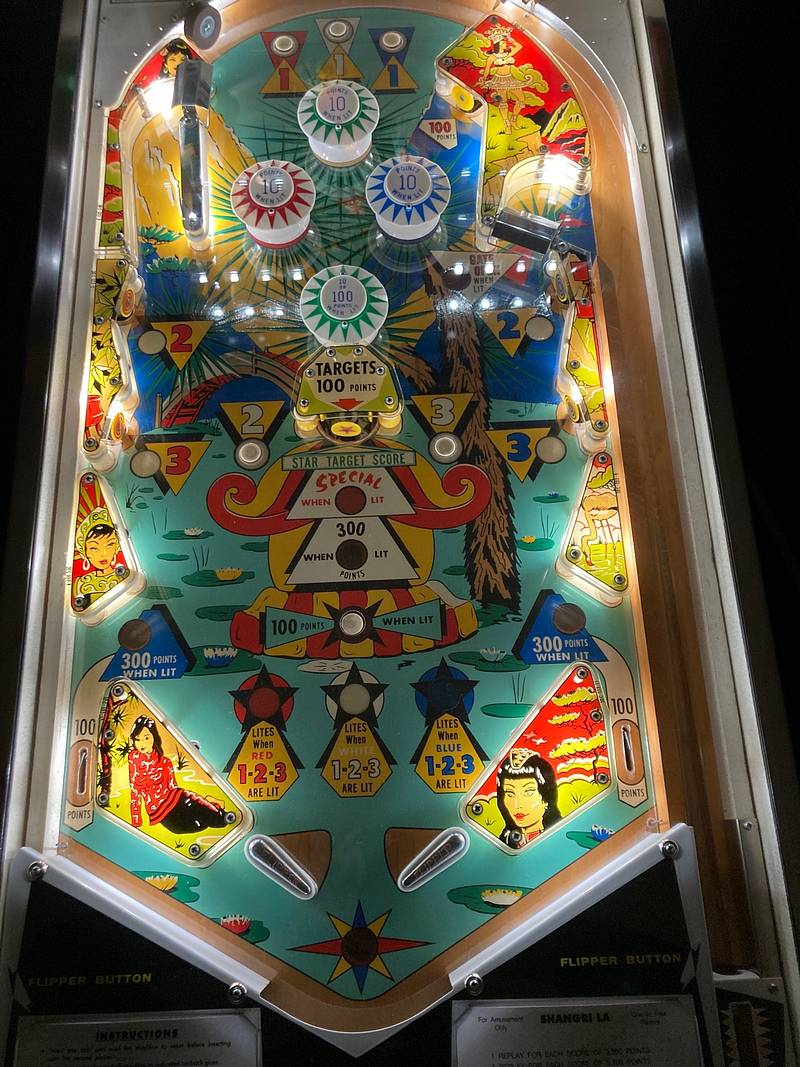 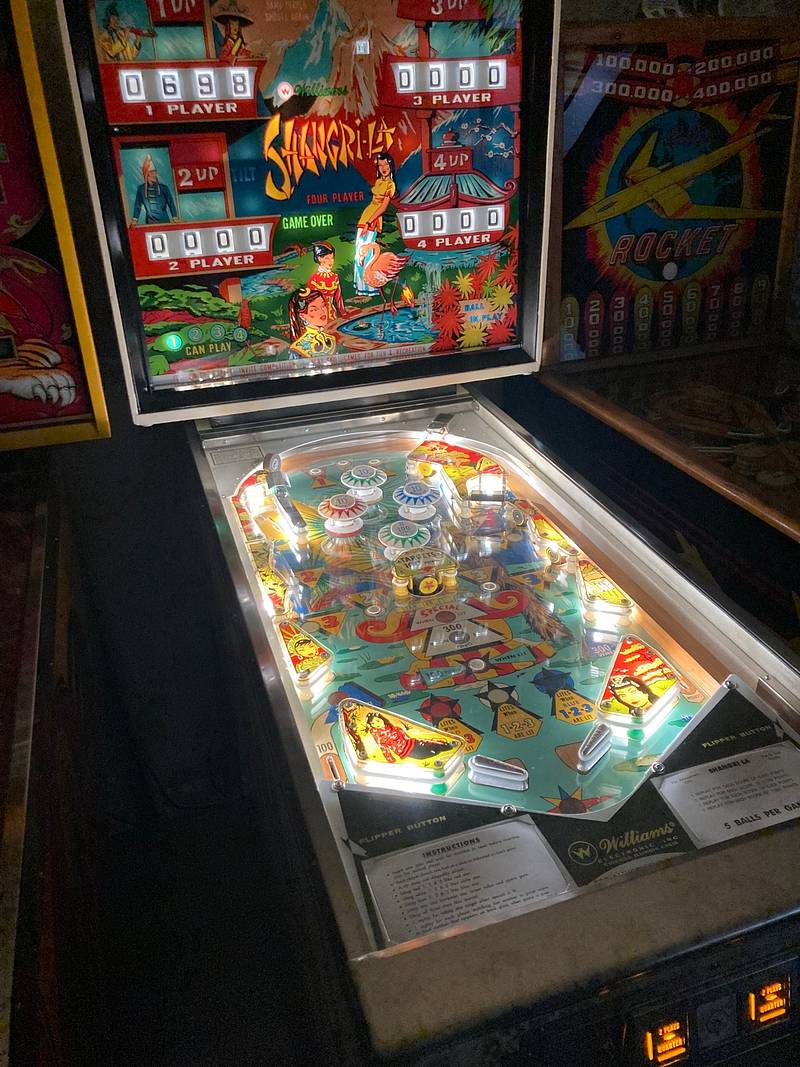 Some have told me that the chrome flippers were an after-market addition.

They are much too common to have been an aftermarket addition. There's so many games that have them exclusively. I've never seen, say a "Friendship 7" with plastic flippers.

Does anyone have a source for replacement two inch chrome flippers?

My Shangri La has the chrome-sters!

I bought a pair of chrome replacement flips off of Ebay some years back. I think they were an aftermarket replacement as they were solid aluminum not hollow like true Williams flippers. It seems like I read Wico or someone may have sold them at some point?

Thanks!
Here’s a popcorn thread of the game if you want to see more of it.

Chrome metal flippers on the Trade Winds. They look pretty new or
perhaps there's no red lettering because of polishing.. 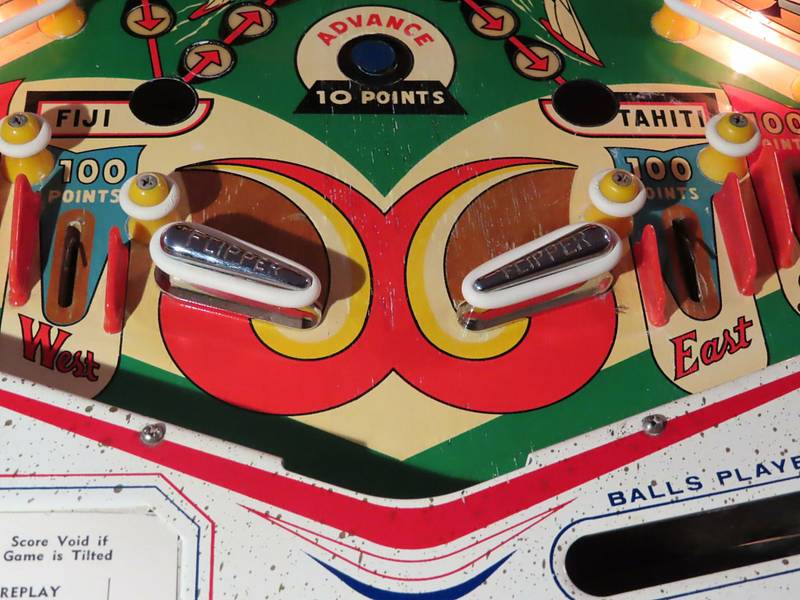 Even the Loop-the-Loop came custom with metal flippers.
And I might add, the local print shop did a good job on
the instruction card which I just installed today.. 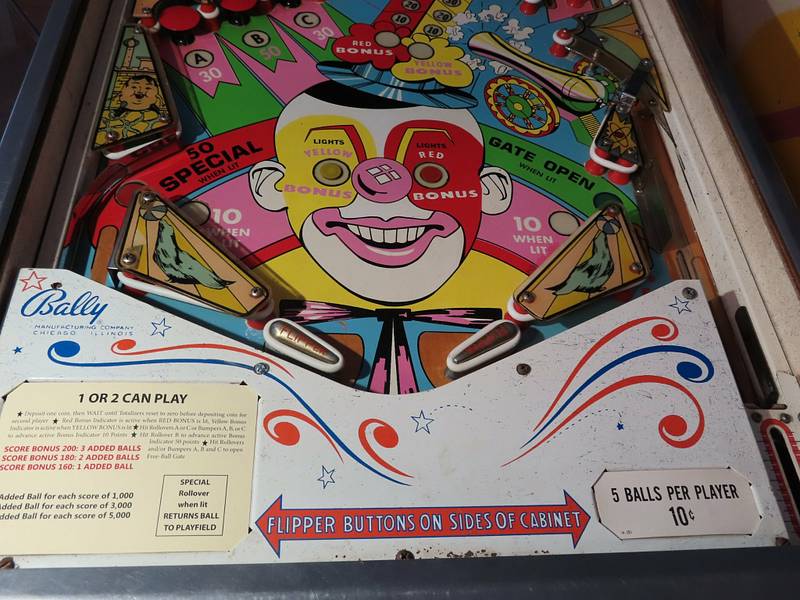 Trade Winds looks original to me. The Loop the Loop looks like the aftermarket I had. Had a decal for the "Flipper" text. Both look cool.

Trade Winds looks original to me. The Loop the Loop looks like the aftermarket I had.

I'm not sure if Trade Winds flippers were replaced, or extra polished.
In person they look even newer than in the pic..
I got in Loop-the-Loop with those flippers. They must have been added to the
machine at some point. It's hard to see from the pic, but they're both left flippers.
The writing on the right one is upside down. They work fine, so I figured I'd leave
them until maybe someday I might need a left chrome flipper..
I actually do like the looks of them even if one is upside down..

Thanks!
Here’s a popcorn thread of the game if you want to see more of it.

Detailed chronology. Thanks for referring us back to the post.

I shopped two TradeWinds and both came with the chrome flippers. Here is one of them. 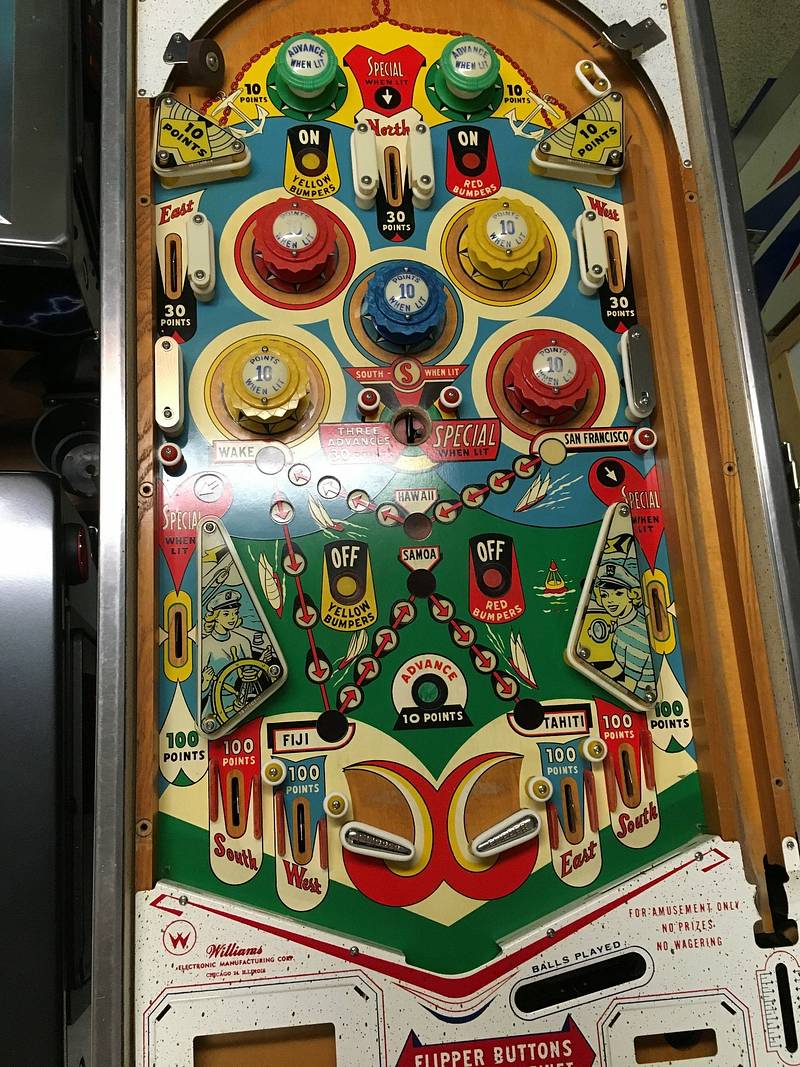 I shopped two TradeWinds and both came with the chrome flippers. Here is one of them.[quoted image]

Were both of them wedgeheads, or was either of them the early release with the rectangular head?

Were both of them wedgeheads, or was either of them the early release with the rectangular head?

Both were reverse wedges.

My Friendship 7 - 1962 - has those lovely chrome flippers. I just go with a single rubber on them. 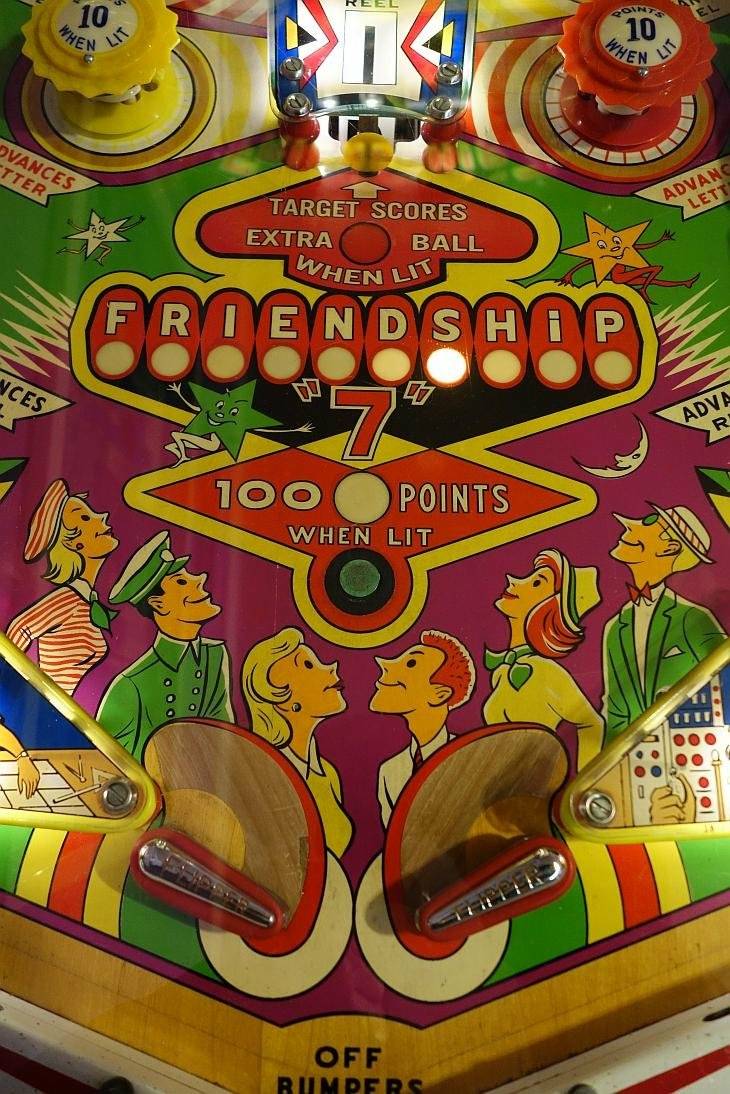 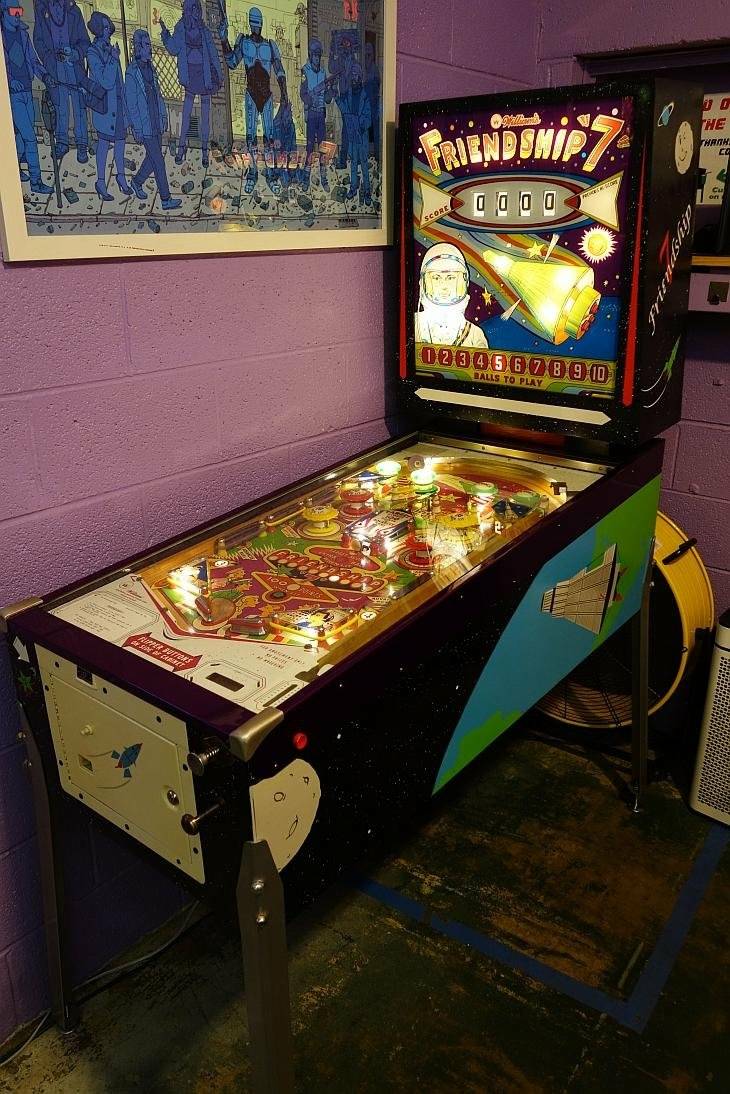 Can anyone send me a high quality scan or picture of the ink well plastic from Teacher's Pet? #teacherspet 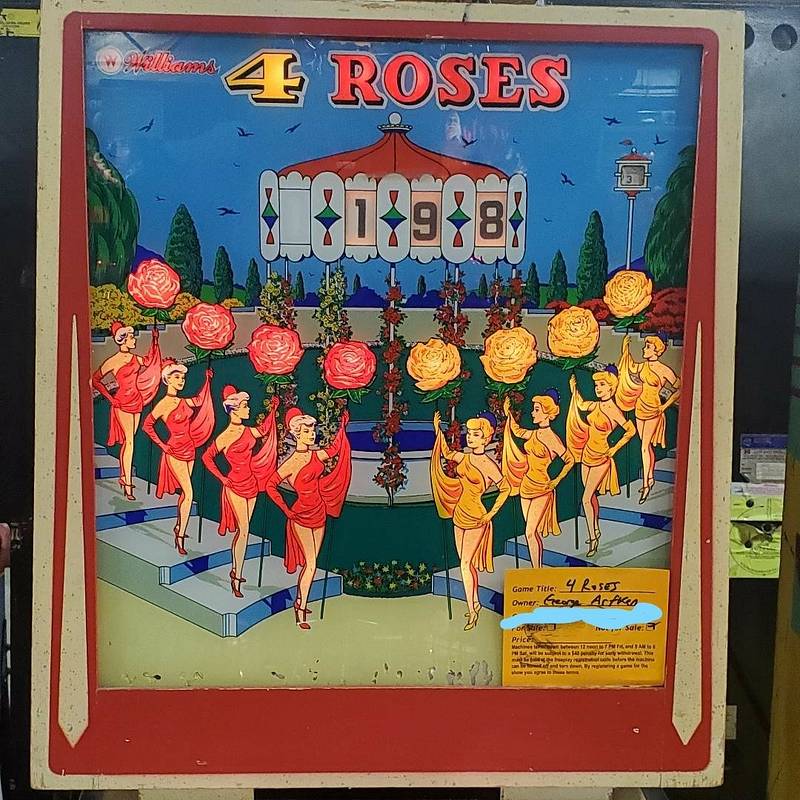 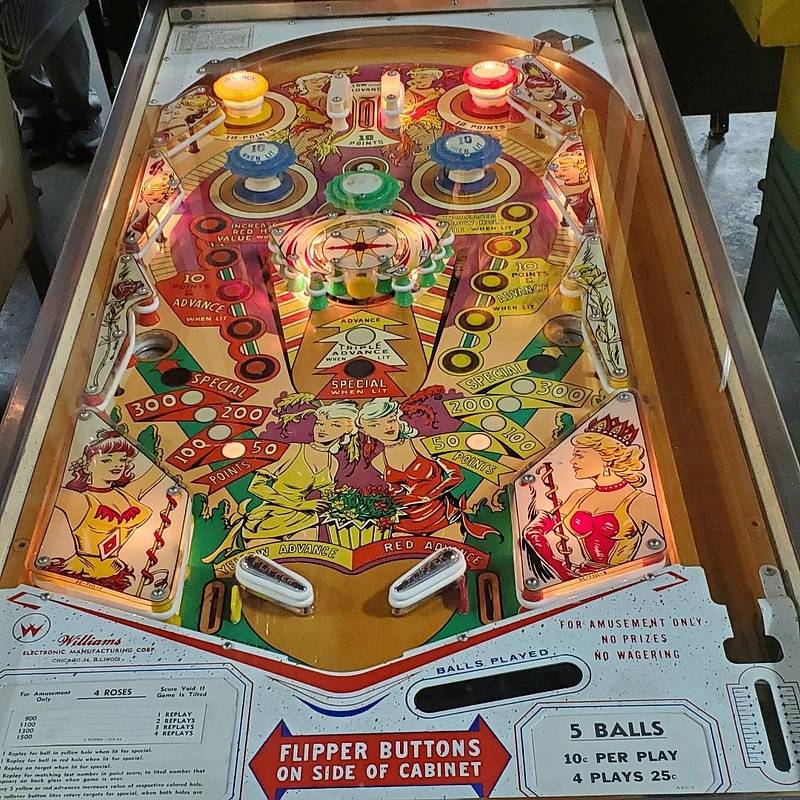 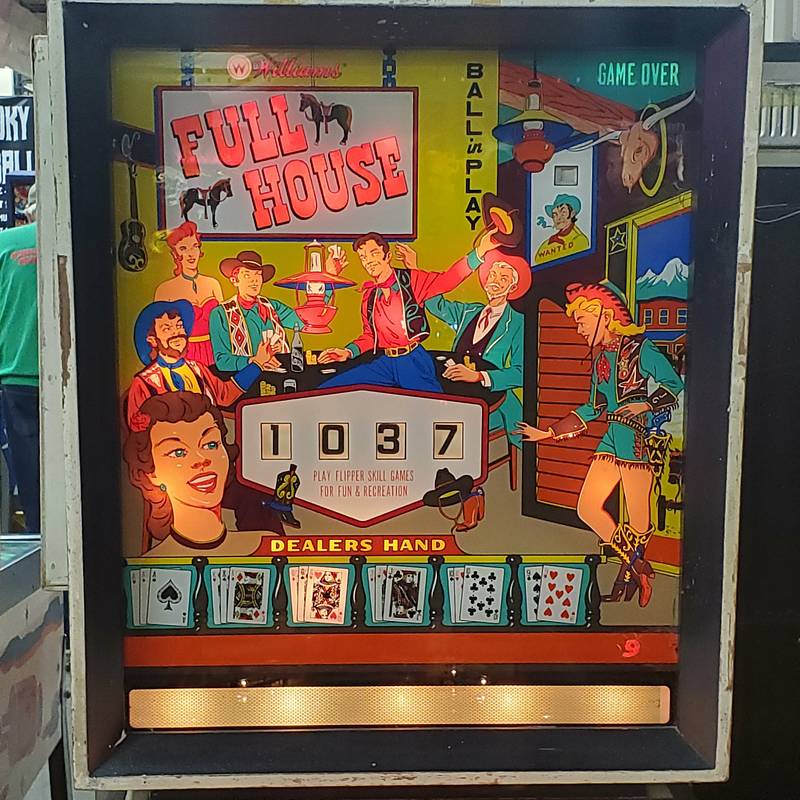 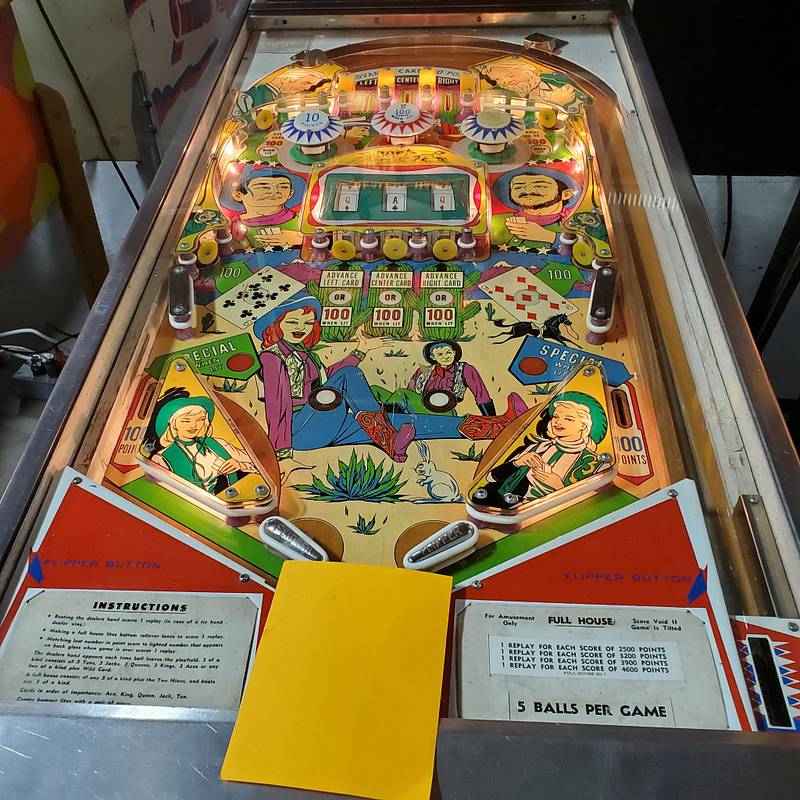 These were in the flea market. 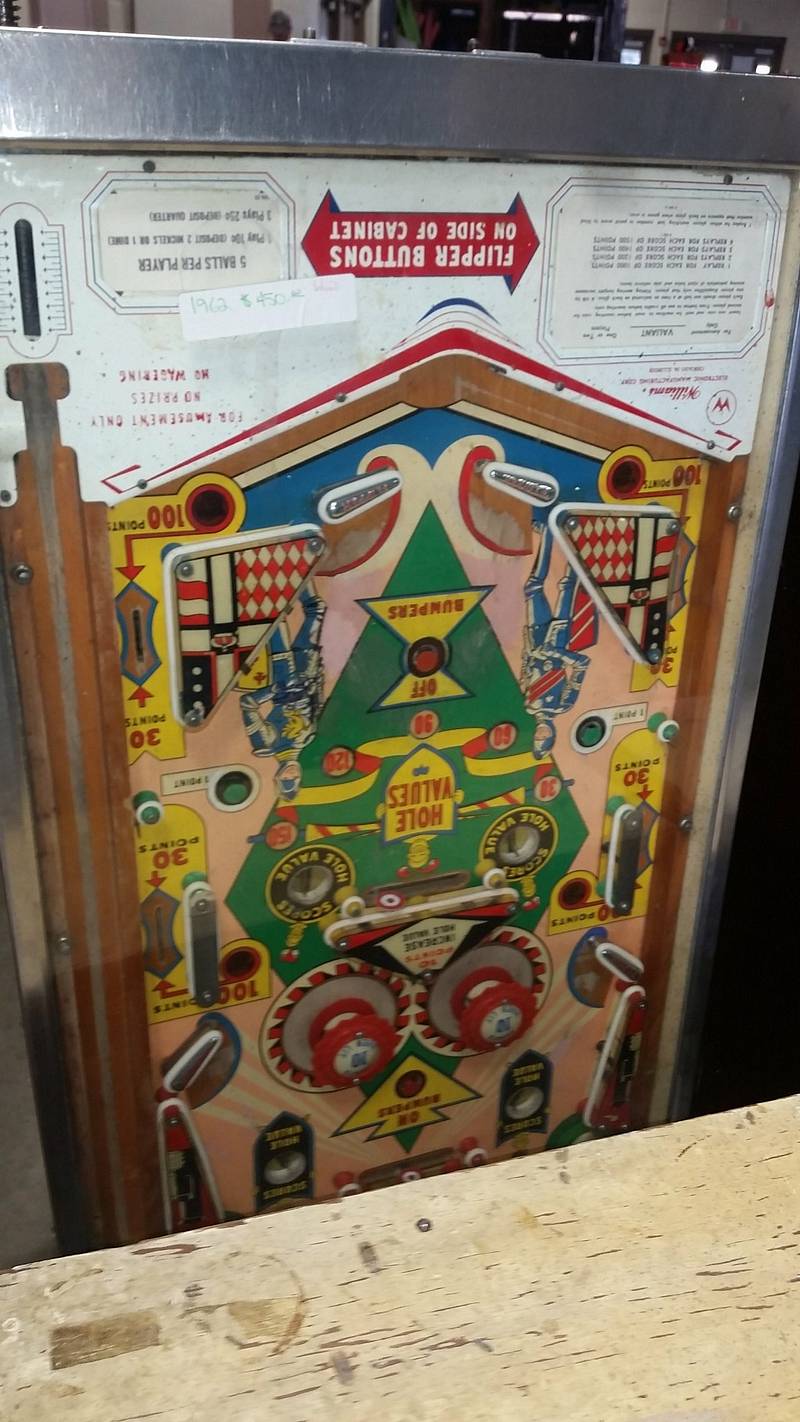 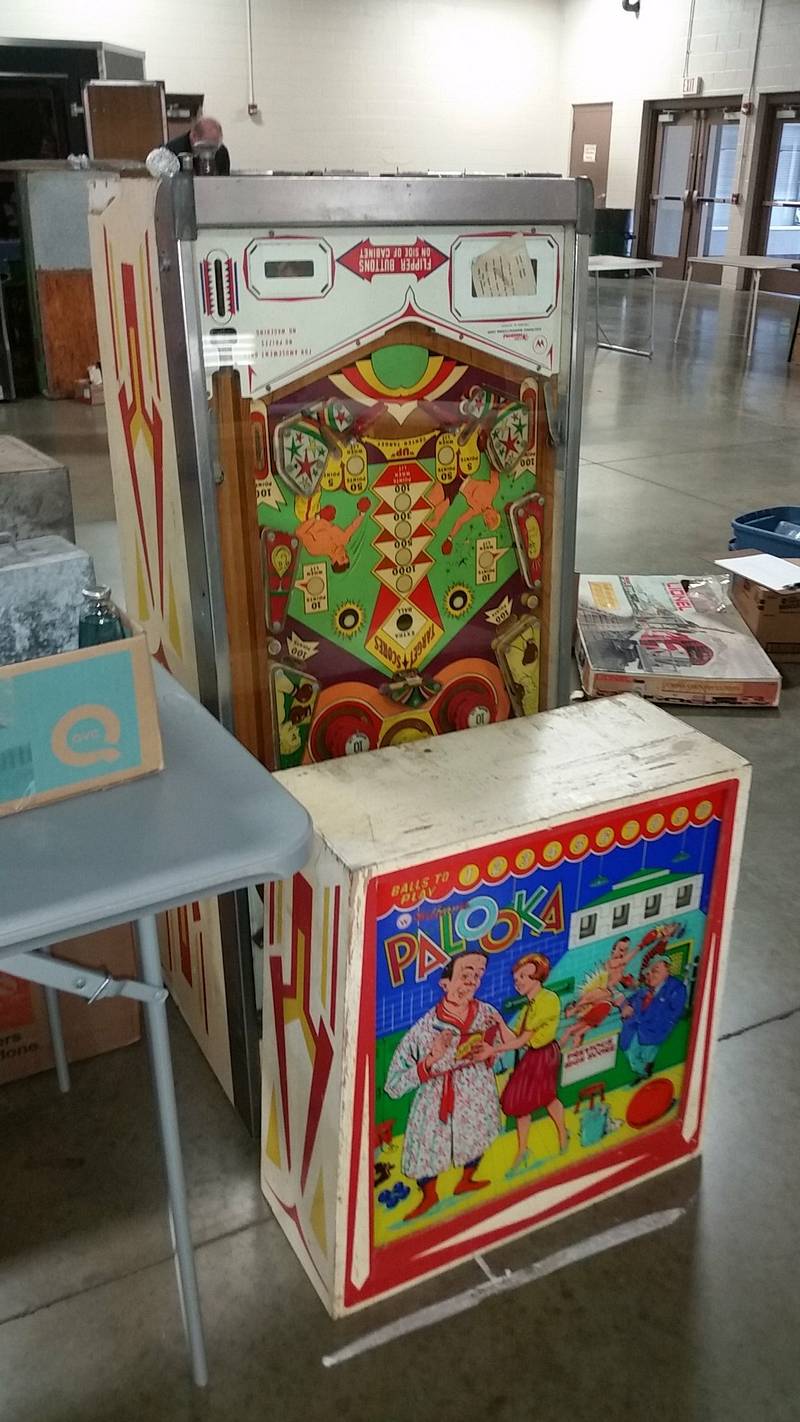 My folks got me an Oh Boy! When I was 13 or 14. Was glad to have a pinball, but didn’t particularly like the game.

Would be interesting to play it again and see if I like it any better. Mostly I remember the large side drains. 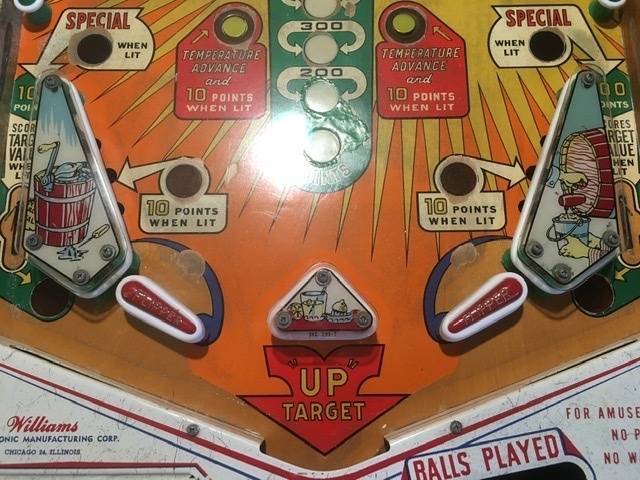 Eager Beaver at a modest price for sale now:

Looks like there is a nice Eager Beaver at a modest price for sale now:
https://pinside.com/pinball/market/classifieds/ad/145645

I spy with my eye an operator sticker...just sayin

I spy with my eye an operator sticker...just sayin

What are you trying to communicate?

Cadillac Music sticker on the head. They used to put a metal plate on some of their games, like an auto dealership.

Cadillac Music sticker on the head. They used to put a metal plate on some of their games, like an auto dealership.

My bad. You guys have great eyes for details. I totally missed it.

You can add Ski Club to your list. Four chrome flippers… 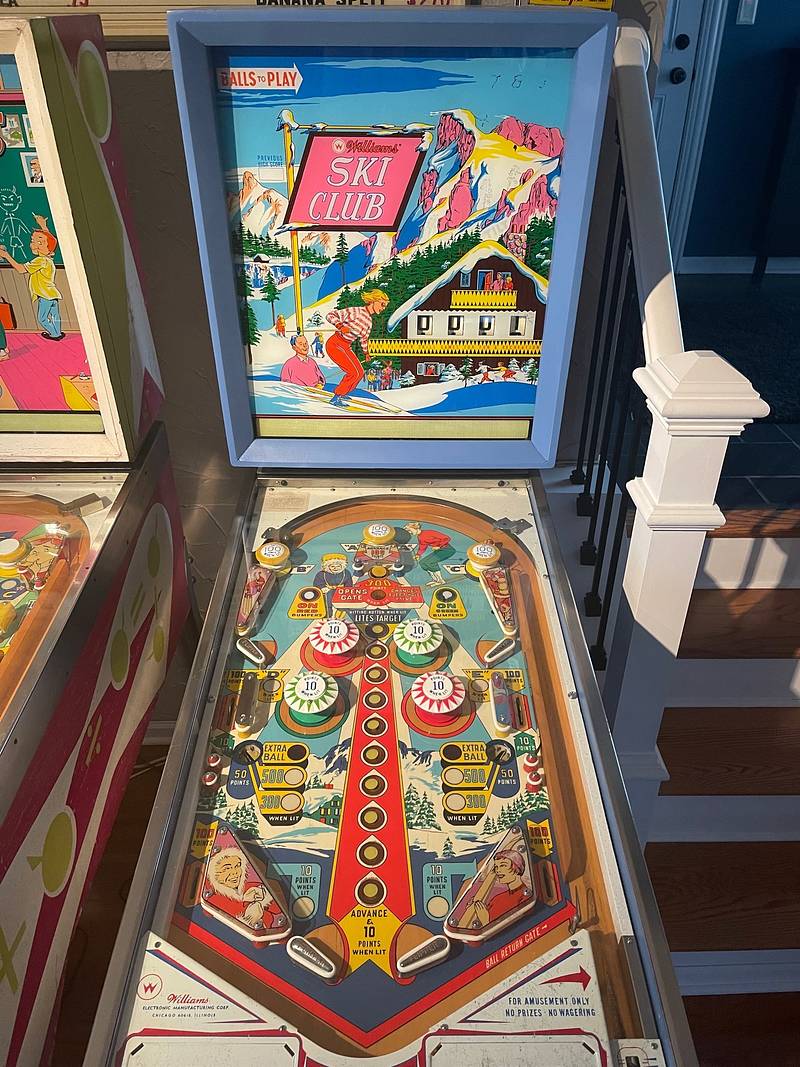 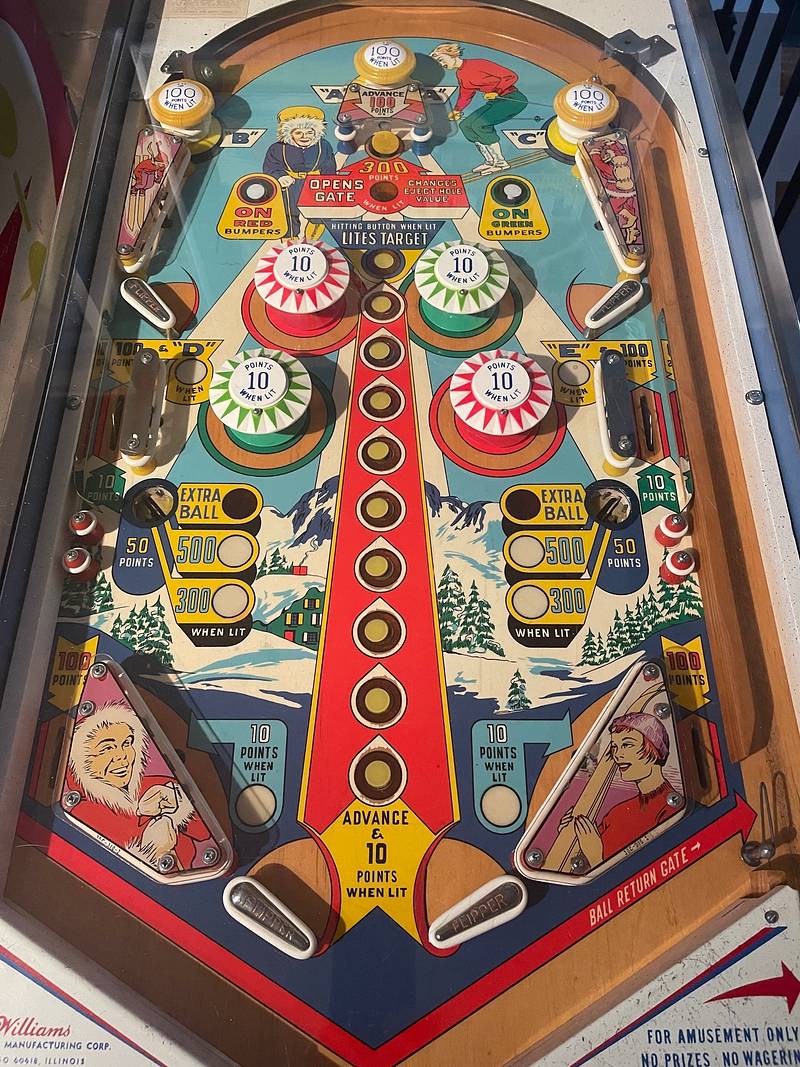 You can add Ski Club to your list. Four chrome flippers…