I have been working on a williams fan tas tic for several weeks and have it working great except for one issue I can't seem to solve. I have included a pic of the schematic area I'm working on. It involves the eject holes kicking the ball out after scoring the appropriate points from the wheel. If the small ball lands in the Triple Bonus, Double Bonus, or Bonus, the eject holes kick out great. They are tied together on the schem. on the same line. If the small ball lands in the other areas of the wheel, (3000,star,gate open, a & b lanes) the scoring works, but the eject arm is weakly pulsed and ball does not kick out.
These are found on a seperate line on the schem. I have checked and adjusted the tilt relay , bonus unit, and eject relay switches. I have also cleaned and checked the 5 relays that are jumped together in between bonus unit switch and eject relay switch.
I thought the score motor switches associated with eject coils might not be mis-adjusted. So, I cleaned and adjusted motor switches 2A, 6A, 1E, and 4D. Nothing seems to cause eject arms to pulse harder when small ball falls in the above mentions holes on the wheel.
With the playfield up, I can activate spin relay, which will spin wheel for a short time, then use a wooden skewer to close the switch on any of the relays mentioned above that activates eject coil. Coil fires twice with each full revolution of score motor, but very weakly. Seems to be tied to switch 2A on second cam. Nothing I do seems to fire eject coils harder. If I also close the tilt relay switch on the m & b switch yo and br-r, so that both switches are closed the eject hole arms fire twice in rapid succession, one weak and one hard pulse?
Thanks in advance for anyone willing to try and follow my reasoning, and will to try and offer some other suggestions on what to try. I will continue to try different things to see if I can solve this issue. 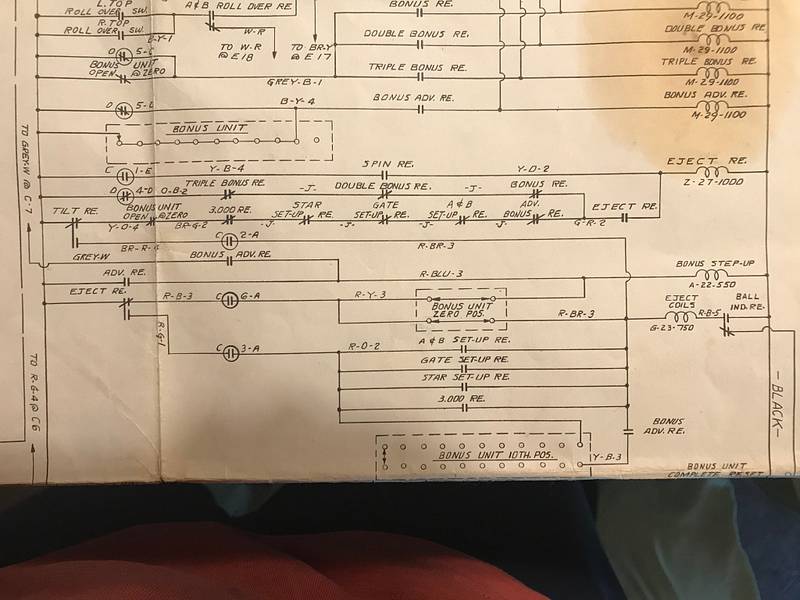 Hi,sflower.i had a problem with my williams ball eject.the problem was I have barrel style score motor ( not carosel).it has a bunch of small jumper wires from one switch to others on score motor.after replacing the small jumpers,ball eject improved alot.cant say if that is problem but you might check those and replace them.the soldier joints are cold on most old williams em's now.have two myself and had to resoldier most connections and replace a lot of jumpers .remington 20 or 22 gauge wire is best.300 volt.

This forum is full of posts from people who tried shotgun cleaning & adjustments, and caused more problems than they were originally trying to solve.
What to do instead: Slowly and carefully diagnose one problem at a time and then fix only that.

Checking jumper wires on score motor with alligator clips didn’t seem to make a difference. When working on it this morning, I see the eject relay fires for triple, double, and single bonus on the wheel. That is when the kickers work great. For the other holes on the wheel eject relay does not fire, and the pulse is very weak, that seems to be the problem. From the schematic, motor 4 D energizes the eject relay for the bonus holes, but I don’t see a motor switch involved in the other whole switches. Anybody see anything different on the schematic?

Schematic shows the affected functions going through the zero switch on the bonus unit.

Still working on this issue. Can’t figure out why eject holes work so well on bonus spaces on wheel, but so weak on others? Ugh

Does the Eject relay activate for different amounts of time for the 2 scenarios?

Motor switch 4D is in line with bonus scores on schematic. It is associated with eject relay lock. The other holes on the next line down go through bonus unit zero switch and tilt relay switch but no score motor switch?

Looks like any non-bonus spin eject is going thru motor 1E right above 4D on the schems (?)

Did you get your Fan-tas-tic working? I just went through a similar problem with mine. I managed to get it fixed. It was actually two separate problems that looked similar.

The second problem happened when the ball landed in advance bonus to top. This would almost never work. The bonus would go to the top position and then just oscillate between the top and next-to-top positions. The ball would never eject from the spin hole. I looked at all the contacts in the circuit and checked all the relays. It turned out to be the contacts on the roulette wheel. I could put the ball in the adv. hole and test continuity with the wheel sitting still and it looked good. However, if I moved the wheel, the continuity went away. Just to confirm, I tested it by powering on the game with the playfield up and started a game. I would manually close the spin hole contact to start the roulette wheel (ball removed from roulette assy.) Then I jumped the contacts for adv. bonus with a test lead on the wiring to the roulette wheel. When I did this, it worked every single time. I had to completely disassemble the roulette wheel and clean all the contacts, lubricate it, and put it back together. It's a pain to take apart and put back together. But it works perfectly now. The ball ejects every time no matter what spot it lands in.