So for my job, I get around the US a lot... I'm always searching out new places to play. The past two weeks, I've been to some really nice pinball arcades but noticed one common thread. The title says it all.. A bunch of machines are set up way too steep... And not just a little, I'm talking most are constantly at the top end of the bubble level limit. Now I know that the bubble level is not 100% accurate but you can physically tell by the gameplay how the flippers can barely manage sometimes to hit shots that you can make on your home pin..or angles that you have dialed in or expected bounces just don't perform...Or super fast SDTM that normally wouldn't occur...Played some the Jurassic Park Pro today that could barely loop off the upper flipper in the top orbit normally that things like a rocket ship going around..

So my question is why is this just to keep the machines pulling quarters while they're popular before they fade out?

All it really does is make me want to put just in a few quarters just to get some Hands-On with the machine before I buy it and discourages me from ever going back to the place so I'm not sure of the logic other than game turn over ... And coin taking

One of the nicest and cleanest places I've been to in a while was in Portland, Oregon. Ground Kontrol... Amazing offering from every generation and clean, working games, but every single one was set to the limits on the leg casters, all the way in back, floored up front.. What gives!

you answered your own question.. to pull in earnings.

that, combined with many operators being ignorant about the proper leg leveler settings from manufacturer to manufacturer.

I get the $$$ thing, but it just makes for frustrating location gaming, really makes me not want to play outside of the HUO environment... Seems like the law of averages would earn more with larger crowds if the machines were properly set up vs setup for quick death

I used to play a Bride if Pinbot over my lunch break at a local pizza joint. The flippers were strong enough to make it enjoyable, but weak enough that you could barely get the ball up the ramp(which if you know BoP, you know this is the most important shot!). At first I HATED it! But the more I played it, the more I dialed into the perfect shot to get it up that left ramp. And oh how satisfying it was when I finally completed the Bride! So while I agree that intentionally setting a game up for failure can be a lousy move by an operator, sometimes it can make it even more rewarding!

they play too floaty with back levelers down. I run mine (back legs) 3/4 up on location. Some games like maiden its easier to make ramps with a steeper pitch. Also, balls get stuck more often with a flatter game. Same with older games and ems' the flatter they are, the more issues.....balls getting stuck on sunk inserts n such.

Since we put our first Nickles in flipperless pins in the 30's these games are designed to take our money.
There has been hanky panky with tables for a long time.

Some games are better being a little steeper anyway. I find

World Cup Soccer to be a lot more fun set steeper than it's supposed to be. It makes it fast and makes the spinning ball really throw the ball around.

I would also venture to say that some operators do not know how to setup a pinball machine pitch properly.
With lots of new people in the industry you will start to see it all over again.

They should be challenging but not Pinburg bust your chops challenging. For some titles a machine that isn't setup
properly will loose more money than earn. "Bride of Pinbot" if you can't get it up.... What's the point?

TechnicalSteam has a point. I think a lot of amusement operators just don't want to take the time necessary to properly level the machine, assuming they realize that there is bubble to look at. They see the machine working and flippers move the ball and take off to the next drop point. Operators that I know near my area have decided not to put out any more pinball machines and sold the few that they had, because they think there is too much maintenance required. They like pool tables that require almost no maintenance, maybe a few video games and electronic juke boxes.

Machines that are set up too flat are even worse, in my opinion. There's a beautiful AC/DC Premium near my work where the front casters are actually higher than the rears. The ball floats around like a balloon. I'd pump quarter in it every day if they would set it up right.

I have a local vendor called Quarter World. It seems like they set every single pin up like a damn 70s camaro with air shocks in the rear.
Look, I know these pins are stupid expensive now. I know they have to earn money but I'm to the point where the first thing I look at is the legs. If the front is bottomed out and the rear is topped out I won't even play it.
I'd love to give them a call and politely express my dismay but they'd probably tell me to pound sand anyway.
Oddly enough, a bar I frequent stopped using Quarter World and the new vendor put in a Kiss pin. I'll be damned if THAT didn't also have the 70s air shock camaro treatment done to it.
I just bought a routed TAF and that was also setup steep as hell.
That's 3 vendors all setup stupid steep. (Say setup stupid steep fast 5 times) lol

Patronize places where they are 6 to 6 1/2 degrees. Except less for older titles.

Patronize places where they are 6 to 6 1/2 degrees. Except less for older titles.

Don't forget to have them remove the glass so you can measure ON THE PLAYFIELD!!

Personally, I get bored playing games that are super floaty or slow and tend to avoid those on location or at shows. I always stay btwn. 6 1/2 - 7, anymore more then it gets to steep (where the flippers don't have enough power) any less then it's to floaty ( and balls get stuck every where, plus you run the bigger risk of falling asleep).

Don't forget to have them remove the glass so you can measure ON THE PLAYFIELD!!

That is what I always do. Never trust those cheap plastic crappy things.

I had been wondering how to make them steeper when my three inch levelers are maxed out in the back and the front ones are all the way down in front with no nut. The secret is to shim the rears with a block of wood. A 2x4 works great.

The secret is to shim the rears with a block of wood.

I had to use a brick. But only because my basement floor is so out of level in that area.

I usually like them set steep, at least for my games at home. If the game is too easy and slow I get tired of it quicker. Make sure 3" leg levelers are in the back and crank it up =D.

It's only getting too steep if you have to drill new holes to mount any part of the tilt bob assembly.

Ah hell, just leave if off. Pinball machines do not need those anyway.

Because most of us who play regularly wouldn't play them as much if they weren't fast and challenging. Nothing worse than floaty!

I guess I am the out guy, I like the bubble to be in the middle.
I always thought that was what a level was for...

I always thought that was what a level was for...

If the level was accurate.

Often they aren't. Even good ones.

I like the bubble to be in the middle.

Middle for me. Except JJPPOTC, I set it in the middle then read the directions and had to re-do, wtf.

Shim the lower end of the bubble where it mounts and it works just fine.

Patronize places where they are 6 to 6 1/2 degrees. Except less for older titles.
LTG : )

I have to respectfully disagree with this. At The Flipper Room, the handful of pitch complaints have been for being too floaty. For Stern machines, I recommend around 7 degrees, for CGC around 7.3 - 7.5.

Don't trust that bubble level either, buy a clinometer or get an app for your phone. Then, after the pitch is adjusted to your tastes, adjust the level screws to get the bubble in the middle.

What sucks is when they make them so steep you can't even make the shots. Saw this with Ghostbuster Premium alot.

Thats how accurate the level is on my Godzilla. Pitch @ 7.0° 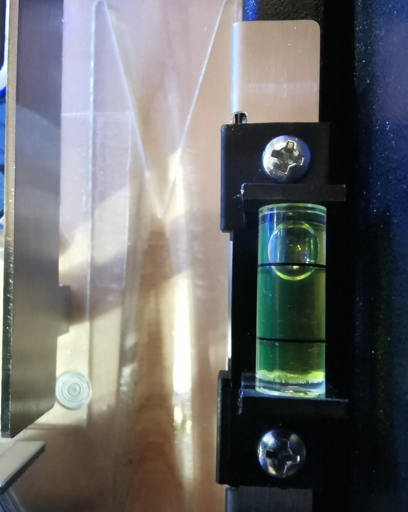 Because most of us who play regularly wouldn't play them as much if they weren't fast and challenging. Nothing worse than floaty!

What you actually mean is that you won't play them if they're shallower, meaning trapping up is much harder and also the ball is far more likely to have an outlane drain.

STEEPER DOES NOT EQUAL HARDER

All my machines are at 6.5° - 7°
People just don’t play enough pinball. If I lower it to make it easier for casual players, I lose my regulars.
But the regulars blow up my games and put insanely high scores on them and get too many replays even when I adjust them waaaaay up

TechnicalSteam has a point. I think a lot of amusement operators just don't want to take the time necessary to properly level the machine, assuming they realize that there is bubble to look at. They see the machine working and flippers move the ball and take off to the next drop point. Operators that I know near my area have decided not to put out any more pinball machines and sold the few that they had, because they think there is too much maintenance required. They like pool tables that require almost no maintenance, maybe a few video games and electronic juke boxes.

Most ops have sold their pinball machines because dollar per dollar pretty much everything you can buy will out-earn pins.

I remember years ago one pool hall not only had the levelers all the way extended, but the back legs were also sitting on 4x4 beams.