Which Pin has the best smash Toy?

Thx for all thise replys. I completly forgot MB. I own it, but it's disassemled. Haven't played it for some time.

I have to agree with ryanwanger and his definiton of smash toy. I also have a Funhouse and I won'T let Rudy go, but imo he's no smash toy.
The SS crate is just a stupid crate with no real special features. No light show, no shaking, nothing but the bang when you hit it and the moster making a noise with Elvira warning you. So much fun with so little effort.

Dunno I might head for sparky or the zombie head, hoping the barn will get an update to feel more like SS.

A few months ago I had a discussion with Roy Wils about what makes a great bash toy. That resulted in me making a list of bash toys on games. For me it turns out that the best, or most fun, bash toys are the ones that are interactive and reveal a hidden passage after being hit several times. The castle in MM is probably the best bash toy as it has 3 levels:
level 1: ball hits draw bridge and end in moat, lowers drawbridge after x shots
level 2: ball travels over drawbridge, hits castle gate, travels back across drawbridge, opens gate after x hits
level 3: ball enters castle to destroy it
Don't have the list in front of me, but I can't think of any other 3 level bash toys. Most are 1 or 2 level toys, with 1 level toys being completely static and 2 level toys revealing a new passage after being hit x times. Pinball Magazine no. 3 is likely to have an article on the best bash toys and why they are so much fun.

Agree with MM for variety and being nicely integrated with the theme (as opposed to a generic toy). Plus the extra ball lock door to the left.

CV: The Ringmaster could be considered 3-leveled: magnet catches the ball when he's down, rises and throws the ball off, satisfying bash when he is up, and when fully raised (to destroy the RM), the spring undeneath provides some nice rejections on straight hard shots.

LOTR LE: Balrog is a very satisfying shot with the shaker. The regular version really feels like it's 'missing' this.

AFM/SM: I like the center ship/sandman toys because you can do a lot of drop catches after these shots.

TOM: The magic trunk is a cool 3-way toy: bash, hole for jackpot, magnet to catch ball and start multiball.

TOTAN/Triple Action: If the spinning disc with posts is a "bash toy" then I love getting the lamp/disc spinning in these games. Not a fan of the smaller version in Avengers.

POTC/CSI: Dunno if the round spinning chamber is a bash toy either, but I like hitting those.

SS: Yup, the crate is cool, and well-implemented.

Junkyard: not a hard shot, but the wrecking ball sounds and movement is cool.

CC: The bit of elevation makes the Bart head a fun shot.

RFM/SWEP1: The whole center is kind of a bash toy, and the reflected video makes it pretty cool.

not really bash toys but Tron and AFM are also a blast to hit the center shots.

Balrog on LOTR, the sound and the fact it comes in en out to block the ring ramp.

Am I the only one that thinks "smash toys" are stupid?

Am I the only one that thinks "smash toys" are stupid?

I agree half the time...

I was absolutely sure Smaug would take number 1 spot easely.

18 inches away from the flippers puts them in the upper half of the playfield.

Frankenstein.....
along with Dracula - mesmerizing me with his semi-circular movement 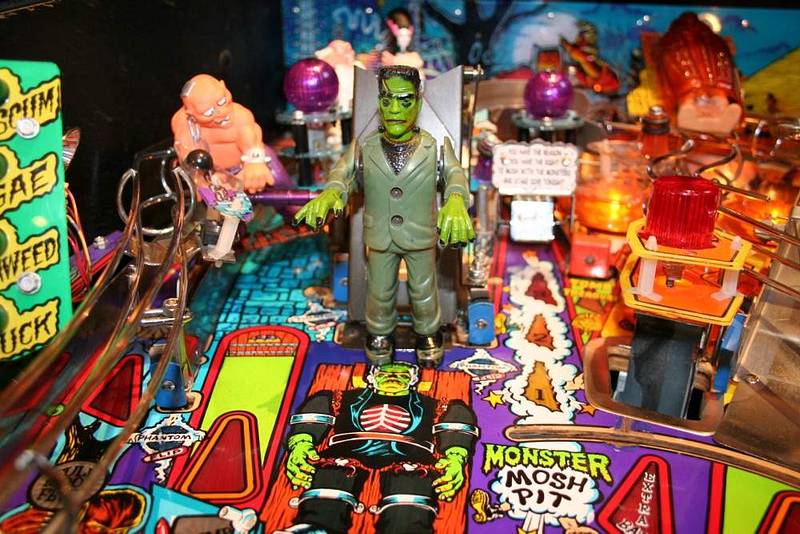 Taking him over Drac?

I'm going to say that POTC has the best bash toy in pinball, that being the ship, due to 3 reasons.

1. Very interactive: the ship can not only be hit, but features mechanical mini "sails" that can be knocked down and the entire ship "sinks" below the playfield
2. Shot reveal: "sinking" the ship reveals another shot
3. Rules: Just like the castle in MM or space ship area in AFM the ship in POTC has multiple levels with each ship increasing in difficulty to hit. However, each ship mode in POTC also leads to a multiball mode and ultimately to a final mini wizard ship mode being Battle Davy Jones which *SPOILER* features the ship moving differently then in the other ship modes.

Taking him over Drac?

Yeah, he's a bigger dude. Drac is a bit girlie.

Drac is a bit girlie.

My vote for Xmen LE Wolverine. Love that toy so so much. Especially love the super expensive replacement cost!

Seriously I have to agree with PanzerFreak with the POTC ship. I never get sick of bashing it and it holds up pretty well to boot.

I have owned a lot of pins that had bash toys, but my overall 'fun' bash is the wrecking ball on Junk Yard. I love the way the ball interacts with targets and all that glass breaking and crashing sounds. It's the pin I go to when I want to end a long day of pent-up anger/frustration.

I can't believe no one has said the Time Expander on Doctor Who yet.

I can. I don't see it as a bash toy. Sure level two requires some bashing, bit it is mostly about locking balls and hitting three shots. Great toy, but not really bash toy.

I'd go POTC as well. It's a game I keep going back too. When released something really new and innovative. I sell it but miss it. Up to 3 now. I really should keep this one.
BDK just because it moves, especially hard second time around...man that thing is quick.
MM as others have said it just keeps giving something new with each hit.

Would be great to see something truly unique again. Lately everything seems the same.

Dockock in Spider-Man because it's not over used.

would the crane on batman count ???

I know every one hates Wolverine

mine would be frank on MB or The crate on SS

TSPP Garage has a nice satisfying **clank** to it.

I find Iron Man particularly satisfying... The magnet, light show and shaker really add to it.

Balrog all lit up! Also love how the mode and Balrog work together. Get member across bridge, then bash Balrog, repeat. Such a great toy and love how he's worked into the game. Also love how he moves out of position when he's not part of the storyline. That's some extra BASH TOY points right there. So cool.

The posts next to the ramps on Taxi...

I find Iron Man particularly satisfying... The magnet, light show and shaker really add to it.

Plus it gets the hell out of the way when you're done bashing it!

I dont know how everyone missed NBA Fastbreak.

A Blocking defender that moves. You need to pass the ball to the 3 shooters. You can pass back and forth between them and hit the shoot button to jam it in the net. Boom shakka lakka!

Best bash toy use by far.

Second stern Star trek vengence. Bash toy, magnet and kickback all in one. The sound when it fires back. Indescribable.
Third MM castle gate
4Th the battlefield on shadow

Decided to expand my list, but ranking them was as they say on the Bachelor [repeatedly], "this is the toughest decision I have ever had to make". Give me a break ... my list of best toys from the top.

No question it is FH Rudy. C'mon - you jam a ball down his throat and he spits it out.

No question it is FH Rudy. C'mon - you jam a ball down his throat and he spits it out.